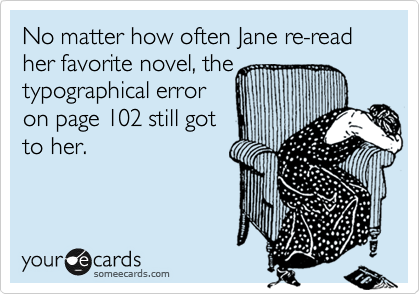 One of the pitfalls of writing historical fiction is that there are dates, genealogical relationships, titles, places, and all manner of sundry details lurking in the halls of history, all waiting to trip up the hapless novelist. Here are some blunders I’ve made in my published novels. (Can you find more?)

When I wrote The Traitor’s Wife, I lacked the excellent resources of Kathryn Warner’s blog on Edward II as well as Seymour Phillips’ biography of the ill-fated king. Thus, there are a couple of things I would change if I were writing my novel today:

Wedding Bell Blues: Edward II is portrayed as giving his and Isabella’s wedding presents to Piers Gaveston. It is more likely that Edward simply gave these valuables to Gaveston for safe keeping.

Where’s Eleanor? In 1322, Isabella is portrayed as being menaced by the Scots at Tynemouth Abbey while Eleanor stays safely at home. In fact, Eleanor was with Isabella, and shared her danger.

Red-Hot! The story of Edward II being murdered via a red-hot poker is most likely a myth, as I knew when I wrote the novel. But given the choice between murdering a character with a poker and a more conventional method, what novelist can resist the poker?

I’m sure there are errors lurking in there; I just can’t remember any offhand.

All My Sons: Kate’s lady informs her that her future husband is a descendant of John of Gaunt, Edward III’s “second oldest son.”  Kate’s lady has the genealogy wrong; John of Gaunt was the fourth son. (Maybe he simply acted more mature.)

Dukes First: Henry Stafford, Duke of Buckingham, reports that the Lancastrians executed after Tewkesbury were beheaded in reverse rank. In fact, the opposite would been true: the highest-ranking captive (here, Henry’s uncle, Edmund Beaufort, titular Duke of Somerset) would die first.

The Queen of Last Hopes

Climbing the Career Ladder: John Morton is referred to on one occasion as “Bishop Morton” years before he actually became bishop.

Her Highness, the Traitor

Sisterhood is Powerful: Frances refers to Mary I as “King Henry’s sister.” She means, of course, King Edward’s sister. Frances was probably tired from traveling.

First They Kill Your Father, Then They Get Your Age Wrong: Anne Seymour, the future Countess of Warwick, is described as being only twelve when she marries the younger John Dudley. This statement, based on the 1538 birthdate usually given for Anne, is supported by a number of secondary sources. My recent research, however, has convinced me that Anne was most likely born around 1536, probably early enough to be named for Anne Boleyn, and that the baby born in 1538 to the Seymours was a son.

Daughter or Daughter-in-Law? In June 1552, John Dudley, Duke of Northumberland, experienced a sudden death in the family, which historians writing in the past few years have identified as being that of his daughter-in-law, Anne Whorwood. In fact, as Christine Hartweg points out, it is possible that that the loss was one of his own young daughters. I depicted the death as being that of Anne Whorwood, but whatever the identity of the female who died, Northumberland’s stoic letter recounting the death has been too often distorted by popular historians determined to view the duke as cold and unfeeling.

Auld Acquaintances. Anna Surratt and Nora Fitzpatrick are strangers to each other when the novel opens. In fact, long after publication, I discovered that the girls had briefly attended school together, though they may well have forgotten that fact when they met years later. (I wish I could.)

The First Lady and the Rebel

They’re in there. I’ve  just blocked them out.

Famed illustrator and cartoonist Thomas Nast makes a brief appearance toward the end of the novel. Unfortunately, at one point he turns  into Mr. Nash. (At least I got it right most of the time.)

Sadly, The Woodvilles does contain some typographical errors/boneheaded mistakes, proving the adage that you can never have too many proofreaders for a book.

Index: There is no entry for Henry VII. This omission can only be blamed on the negligence of the indexer. Who, unfortunately, was me.

Readers of the advance review copies of Her Highness, the Traitor will find that the Duchess of Somerset is described in the list of characters as “Wife to Edward Seymour, later married to Catherine Parr.” It’s safe to say that this marital arrangement would have distressed everyone involved.

The Lord Projector: Edward Seymour, Lord Protector of Edward VI, is referred to once in the review copy as “the Projector.” I was actually rather sorry to correct this one.