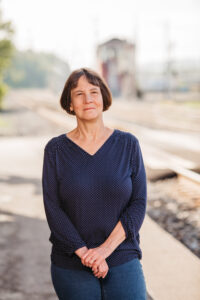 As a writer of biographical fiction, one of my main goals is to avoid the stereotypes, myths, and misconceptions that have gathered around historical figures over the centuries. At the same time, I strive to remain true to known historical facts and to the mores of the times in which my characters lived. I use both primary sources—letters, newspapers, diaries, wills, diplomatic dispatches, household inventories, land grants, royal records, and so forth—and modern historical research to bring my characters to life.

My first two novels, set in fourteenth-century England, feature the Despenser family: The Traitor’s Wife: A Novel of the Reign of Edward II and Hugh and Bess.

My third novel, The Stolen Crown, set during the Wars of the Roses, is narrated by Henry, Duke of Buckingham, and his wife, Katherine Woodville. My fourth novel, The Queen of Last Hopes focuses on Margaret of Anjou, one of the most maligned queens in English history.

My fifth novel, Her Highness, the Traitor, is narrated by Frances Grey, Duchess of Suffolk, and Jane Dudley, Duchess of Northumberland, the mother and the mother-in-law of the tragic Lady Jane Grey.

After publishing my first five novels, I made a jump across time and across the Atlantic. My sixth novel, Hanging Mary, is the story of Mary Surratt, the first woman to be executed for treason by the United States government. My seventh novel, The First Lady and the Rebel, focuses on Mary Lincoln and Emily Todd Helm, half-sisters divided by civil war.

I am also the author of two biographies: The Woodvilles, which tells the story of the family that found itself in the thick of the Wars of the Roses, and Margaret Pole: The Countess in the Tower, an account of the ill-fated noblewoman who survived the Wars of the Roses only to find herself on the wrong side of Henry VIII.

I am always happy to talk to book clubs and to groups about my books and about my research. To contact me for this or any other reason, please email me at mail@susanhigginbotham.com. I will respond as soon as I can.