It’s November, and that means county public library sale time! As I have been for the past couple of years, I volunteered to help and as a perk got first pick of the books I was unloading. I had a nice haul:

Charles II by Ronald Hutton
Isabel of Burgundy by Aline Taylor
Eleanor of Aquitaine by Desmond Seward
Food in History by Reay Tannahill
Sex in History by Reay Tannahill (they weren’t together, I just got lucky)
King James by Antonia Fraser
Henry the Eighth by Francis Hackett
Elizabeth I by Paul Johnson
The Goldsmith’s Wife by Jean Plaidy (I had this one, but my copy was too fragile for reading)
The Other Queen by Philippa Gregory (hey, it was $2)
Louis XIV by Ian Dunlop
Monarchy by David Starkey
Wheel of Fortune by Susan Howatch
The White Queen by Philippa Gregory (I can take Melusine for $2, and I did like parts of it)
The Days of Duchess Anne: Life in the Household of the Duchess of Hamilton by Rosalind Marshall (I have no idea who this is, but it might come in handy one day)
Abe by Richard Slotkin
The Rise and Fall of Anne Boleyn by Retha Warnicke (I was really excited to find this one, and let out a whoop. Well actually, being an introvert, I said, “Isn’t that nice,” in an undertone).
Louis and Antoinette by Vincent Cronin
Life on a Medieval Barony by William Stearns Davis
The Spider King by Lawrence Schoonover (I think I had this one already, but I couldn’t find it the other day)
England’s Mistress: The Infamous Life of Emma Hamilton by Kate Williams (I rescued this one from the romance section, where it was languishing next to books with bare-chested Scotsmen on the cover)
The Queen’s Husband by Jean Plaidy
Queen in Waiting by Jean Plaidy (I have this one, it turns out, but I got so excited about finding old Jean Plaidy paperbacks that I decided to take a chance and get it anyway)
A Coffin for King Charles by C. V. Wedgwood
The Fifth Queen by Ford Madox Ford
Henry VIII: Images of a Tudor King by Christopher Lloyd and Simon Thurley
Elizabeth: Captive Princess by Margaret Irwin
Anne Boleyn by Norah Lofts (as usual, the Tudors were well represented at this sale)
Medieval Warfare Source Book by David Nicholle (Vol. 1. No, I didn’t see volume II)
Harold II: The Doomed Saxon King by Peter Rex
The Plantagenet Prelude by Jean Plaidy (another duplicate–I really need to bring a list)

Goofiest question a customer asked me: “Are there any good books here?” My answer, “What do you like to read?” Customer: “I don’t know.”

Book that will probably get a title change if it’s ever reprinted: Gay Monarch: The Life and Pleasures of Edward VII.

Number of copies of The Autobiography of Henry VIII in the Biography section: 1 (usually I pull three or four out of there).

Most underloved area of the book sale: Westerns

Times I appeared on TV tonight, according to my daughter, when the local news channel did a broadcast about the sale: 1. My daughter says that I have my back to the camera and am rubbing one foot with the other. My feet were aching by then.

Anyway, the sale was held in a former grocery store. As you can see, the romance paperbacks fit quite nicely in the frozen food area: 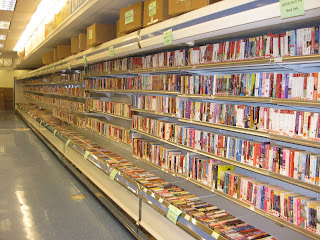 I probably shouldn’t go back, but I probably will give into temptation (especially since many books were still in their boxes when I left today because of lack of shelf space).

12 thoughts on “Yes, It’s My Favorite Time of Year Again”