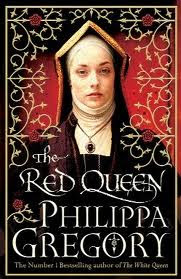 In fact, I went shopping for Philippa Gregory’s latest novel so early in the morning that Barnes and Noble barely had its display ready! What can I say–I’m a Wars of the Roses novel junkie.

First, despite its title, The Red Queen is not about Margaret of Anjou, but about Margaret Beaufort, Countess of Richmond, mother of Henry VII. (For some reason, no one in the novel ever addresses Margaret as the Countess of Richmond, though records from the time refer to her as such, and she herself seems to be unaware that she holds that title through her first marriage to Edmund Tudor, Earl of Richmond. I found this odd, because Margaret as depicted here is not a woman to forget the fact that she has a title.)

Margaret, as those of you who have read the early reviews know, is convinced from early childhood that she is chosen by God to do great things, just like Joan of Arc. When she bears her only child, Henry Tudor, she becomes equally convinced that her God-granted destiny is to put her son on the throne. For those who do not share her conviction–which amounts to just about everyone–Margaret has nothing but scorn.

First, the bad news: there are some odd historical errors here. Gregory pushes the 1469 Battle of Edgecote into 1470, making it the event that restores Henry VI to the throne, and she has Elizabeth Woodville give up the Duke of York before, instead of after, Hastings is executed. (I suppose Gregory might have been following the theory that Hastings was executed on June 20 instead of June 13, but that theory has been discredited for some time.) These chronological errors don’t make much difference in the greater scheme of things, but they will distract and annoy anyone who’s done more than cursory research into this period. I also found it highly unlikely that Margaret and the other characters would repeatedly exchange letters detailing their treasonous thoughts and schemes, as they do here; they might as well have drawn lines on their necks reading “CUT HERE.”

Despite those reservations, I did enjoy this novel. Telling a first-person story through an essentially unlikable narrator is a tough job, and Gregory does it very well here. Margaret’s snide remarks about the other characters made me laugh out loud at several points, one of my favorites being her comment about Katherine Woodville: “a girl born and bred only to raise hens in Northampton.” There are some rather droll moments, such as when the widowed Margaret canvasses her possible future husbands and sets her cap at Richard, Duke of Gloucester, only to find that the unsuspecting prospective groom has foiled her plans by marrying Anne Neville. Despite being seen through the eyes of the obtuse and insensitive Margaret, several of the supporting characters are quite sympathetic, particularly Henry Stafford, Margaret’s sardonic, war-weary second husband, and Jasper Tudor, Margaret’s loyal brother-in-law. Henry Stafford’s death was quite moving, and Jasper’s scenes with his baby nephew were quite sweet. Margaret’s cynical, opportunistic third husband, Thomas Stanley, is the perfect foil for Margaret, without being a cardboard villain. He did much to keep the latter third of the novel, which recounts the very familiar events of 1483 to 1485, moving along at a brisk pace. Elizabeth of York makes a brief appearance, but one that’s long enough to inform the reader that she is no fool. As for Margaret herself, although I don’t share Gregory’s view of the historical Margaret Beaufort, I didn’t find her characterization here implausible, grossly unfair, or one-dimensional, as I have in some novels where Margaret is depicted as a fiend who does everything but cackle, “I’ll get you, my pretty, and your little dog, too!”

All in all, I found this a diverting and enjoyable read about a woman who’s been relatively neglected in historical fiction.

9 thoughts on “Yes, I Bought The Red Queen the First Day It Came Out”