Nearly every biography of Elizabeth Woodville gives her birth date as being some time in 1437, the same year her parents, Jacquetta, Duchess of Bedford and her husband Sir Richard Woodville, were pardoned for their secret marriage. But where does the 1437 birthdate come from? From only one source–this portrait. 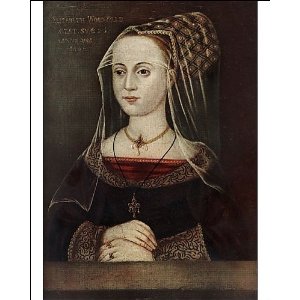 The portrait in question is labeled “1463” (or at least, that’s the date I’m told it says; I can’t read it) and gives Elizabeth’s age as twenty-six (again, I can’t make it out myself)–hence the 1437 birth year. In a 1934 article in Burlington Magazine entitled, “The Early English School of Portraiture,” John Shaw suggested that it was done by John Stratford, who on July 8, 1461 was appointed as “the king’s painter.” Shaw described the veil in the portrait as a “widow’s veil” and suggested that the likeness was painted before Edward IV’s marriage to Elizabeth.

Based on this evidence, Elizabeth’s early biographer David MacGibbon wrote confidently, “All remaining doubts regarding the date of Elizabeth’s birth can now be said to have been finally dispelled by the inscription on the panel portrait of Elizabeth in the possession of Dr. W. A. Shaw of the Record Office. On this portrait, painted in 1463, her age is given as 26. This would make the year of her birth 1437.” More recently, David Baldwin in his biography of Elizabeth wrote, “Her date of birth is unknown, but a portrait dated 1463 indicates that she was then twenty-six.”

The label on the portrait is problematic, however. First, it is likely not contemporary. A label made in 1463 would surely identify Elizabeth as “Dame Elizabeth Grey,” her married name at the time, not as “Elizabeth Woodville.” Nor would it use the spelling “Woodville,” which is a modern spelling. A label made in 1464, after Elizabeth became queen, would likely say simply “Elizabeth” or “Elizabeth queen to Edward IV” or something of the sort.

Moreover, it is doubtful that the portrait dates from 1463.  While John Stratford was indeed made the king’s painter in 1461, it is highly unlikely he would have been sent to take Lady Elizabeth Grey’s portrait in 1463. By all accounts, Edward IV’s marriage to Elizabeth was a secret match that took all of the country by surprise. This is hardly consistent with a scenario of Edward IV commissioning a portrait of Elizabeth the year before he married her. Moreover,  in 1463 Elizabeth was in straitened circumstances after the death of her first husband, Sir John Grey, at the second battle of St. Albans in 1461. She was having difficulty recovering her dower and her sons’ inheritance; the following year, she would enlist William, Lord Hastings, in bringing her plight to the attention of the king. If she was on such terms with Edward IV in 1463 that he was having her portrait painted, she would have had no need of Hastings’ help in 1464.

The other possibility is that Edward IV had nothing to do with commissioning the portrait. But Elizabeth’s struggles over her dower indicate that she was not in a financial position to have her portrait taken in 1463. Nor were barons’ daughters in the habit of commissioning such portraits in the 1460’s, at least in England.

What about the “widow’s veil”? I am not an expert in medieval fashion by any means, but I see nothing in Elizabeth’s transparent veil to suggest that it was a mark of widowhood. Notably, Elizabeth is not wearing a barbe, the neck covering usually associated with medieval widow’s wear.

So when was Elizabeth born? Even if the 1463 date on the portrait is discounted, it’s not impossible that she was born in 1437. According to an inquisition post mortem, Thomas Grey, Elizabeth’s oldest child, was born around 1455. Her youngest child, Bridget, was born on November 10, 1480.  If Elizabeth was born in 1437, she would have been around 18 at the time of Thomas’s birth and 43 at the time of Bridget’s birth. Both dates are  consistent with a 1437 year of birth. While 43 might seem a tad old for childbearing, Elizabeth’s own mother, Jacquetta, was recorded as being around seventeen at the time of her marriage to the Duke of Bedford in 1433, putting her birthdate at around 1416; her youngest child, Katherine, was born around 1458. Thus, she would have been about 42 when her childbearing ceased.

One source (albeit not strictly contemporary) suggests a later date of birth for Elizabeth, however. The following handwritten note by Robert Glover, Somerset Herald, on a late-fifteenth-century visitation (Visitations of the North, part 3, p. 57), which Brad Verity kindly called my attention to several years ago, may indicate the birth order of the Woodville children:

Anthony, the first child named in Glover’s list, was listed in his mother’s 1472 postmortem inquisition as being “of the age of thirty years and more,” which would put his birth date at around 1442, but the “and more” leaves plenty of hedge room and leaves open the possibility that he was born earlier than 1442. It is entirely possible, then, that he, not Elizabeth, was the oldest child. Unless new records surface, we’ll probably never know–but there are good reasons to doubt the inscription on the portrait as a source.

21 thoughts on “When Was Elizabeth Woodville Born?”