Did you really think that this blog was going to let the royal nuptials between Prince William and Kate Middleton pass without notice?

First, this blog is located in North Carolina, home of Krispy Kreme doughnuts, and I’m proud to say that they’ve done things up right for the ceremony with these Gold Ring doughnuts: 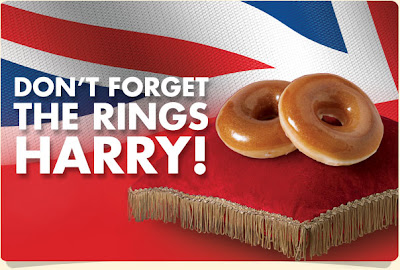 (Sadly, it looks as if you have to be in the UK to get them.)

Anyway, in a shameless attempt to get in on the royal wedding excitement, I’ve assembled a list of wedding tips from those who ought to know best: some medieval and Tudor rulers.

Edward II: No wedding is complete without your best chum. And make sure he looks HOT.

Edward III: Let your mother and her boyfriend pick out your bride, and things will work out just fine.

Henry V: Get some value with your bride, like France.

Henry VI: Put your foot down when your bride says, “Honey, can you give Maine back to my uncle Charlie? Pretty please?”

Edward IV: A quiet little ceremony will do just fine.

Richard III: Don’t want your mother-in-law meddling in your wedding ceremony? No problem! Keep her in sanctuary.

Henry VII: Let your mother and the bride’s mother pick out your bride, and things will work out just fine.

Lady Jane Grey: Whatever you do, don’t marry a guy named Dudley.

Mary I: Don’t let a little rebellion stand in the way of marrying the man you love.

Elizabeth I: Whatever you do, don’t marry a guy named Dudley.

7 thoughts on “Wedding Tips from the Royals Themselves”