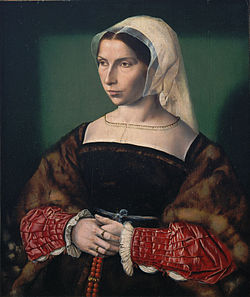 In May 1510, Henry VIII is supposed to have strayed from the marital bed of Catherine of Aragon, taking as his partner Anne, Lady Hastings, a sister of Edward Stafford, Duke of Buckingham. Indeed, book after book confidently asserts that Anne was Henry’s mistress, at least for a short time.

Anne was the younger daughter of Henry Stafford, Duke of Buckingham (executed in November 1483 for rebelling against Richard III) and Katherine Woodville, the youngest sister of Elizabeth Woodville, Edward IV’s queen. Anne’s husband, George Hastings, became the first Earl of Huntingdon in 1529. His grandfather, William, Lord Hastings, had also been executed by Richard III.

George was born in 1486/87. As Anne was alive at the time of her father’s rebellion in 1483, she was some years the senior of Henry VIII, born in 1491. Anne and George were newlyweds in May 1510, having been married in December 1509. It was Anne’s second marriage; she was the widow of Sir Walter Herbert, the illegitimate son of William Herbert, Earl of Pembroke.

Elizabeth, Anne’s older sister, was married to Robert Radcliffe, Lord Fitzwalter. Both women served Catherine of Aragon, and this was where the trouble started. As Don Luis Caroz, the Spanish ambassador, reported on May 28, 1510 (the brackets are those of the State Papers, Spanish editor):

What lately has happened is that two sisters of the Duke of Buckingham, both married, lived in the palace. The one of them is the favourite of the Queen, and the other, it is said, is much liked by the King, who went after her. Another version is that the love intrigues were not of the King, but of a young man, his favourite, of the name of Conton, who had been the late King’s butler. This Conton carried on the love intrigue, as it is said, for the King, and that is the more credible version, as the King has shown great displeasure at what I am going to tell. The favourite of the Queen has been very anxious in this matter of her sister, and has joined herself with the Duke, her brother, with her husband and her sister’s husband, in order to consult on what should be done in this case. The consequence of the counsel of all the four of them was that, whilst the Duke was in the private apartment of his sister, who was suspected [of intriguing] with the King, Conton came there to talk with her, saw the Duke, who intercepted him, quarrelled with him, and the end of it was that he was severely reproached in many and very hard words. The King was so offended at this that he reprimanded the Duke angrily. The same night the Duke left the palace, and did not enter or return there for some days. At the same time the husband of that lady went away, carried her off, and placed her in a convent sixty miles from here, that no one may see her. The King having understood that all this proceeded from the sister, who is the favourite of the Queen, the day after the one was gone, turned the other out of the palace, and her husband with her. Believing that there were other women in the employment of the favourite, that is to say, such as go about the palace insidiously spying out every unwatched moment, in order to tell the Queen [stories], the King would have liked to turn all of them out, only that it has appeared to him too great a scandal. Afterwards, almost all the court knew that the Queen had been vexed with the King, and the King with her, and thus this storm went on between them. I spoke to the friar about it, and complained that he had not told me this, regretting that the Queen had been annoyed, and saying to him how I thought that the Queen should have acted in this case, and how he, in my opinion, ought to have behaved himself. For in this I think I understand my part, being a married man, and having often treated with married people in similar matters. He contradicted vehemently, which was the same thing as denying what had been officially proclaimed. He told me that those ladies have not gone for anything of the kind, and talked nonsense, and evidently did not believe what he told me. I did not speak more on that subject. I spoke with him in order to try whether I could not in this or that manner discuss with him some pending affairs, and [to remind him] that he never ought to consider me as a stranger in these matters, but until this time I have not found him serviceable to me. He is stubborn, and as the English ladies of this household as well as the Spanish who are near the Queen are rather simple, I fear lest the Queen should behave ill in this ado. She does so already, because she by no means conceals her ill will towards Conton, and the King is very sorry for it.

“Conton” is identified by the editor as William Compton, Henry VIII’s groom of the stool. A detail that is often added to this tale is that upon catching Compton, Buckingham bellowed, “Women of the Stafford family are no game for Comptons, no, nor for Tudors either!” The quotation does not appear in the ambassador’s report, however, and in fact it seems that Buckingham never actually said this. Rather, the comment was first made by Catherine’s biographer Garrett Mattingly in his description of the incident: “Whether out of loyalty to the Queen or to her family, the elder sister alarmed her brother, who surprised the gallant Compton in the younger’s chamber. Buckingham was furious. Women of the Stafford family were no game for Comptons, no, nor for Tudors either.” At some point, historians began putting Mattingly’s comment directly into Buckingham’s mouth, presumably thinking that it was something the choleric duke might have said.

But was Anne actually Henry’s mistress? Nothing in the ambassador’s report, which is the sole source for this incident (an abbreviated version appears in the Letters and Papers of Henry VIII), indicates how far their relationship, if any, had actually gone. They could have been lovers, or they could have been progressing toward an affair that was cut short by the intervention of Anne’s sister and the duke. Alternatively, they could have just as easily been having a harmless flirtation or playing at the game of courtly love–and, of course, it is also possible that nothing untoward at all had been going on between the king and Anne. Henry’s anger could have been caused by annoyance that Anne’s sister and brother were upsetting the queen with their suspicions, or irritation that Buckingham was reprimanding one of his favorite courtiers, and Katherine’s anger could have been at Henry’s dismissing one of her favorite ladies. Still, for the New Year of 1513, the king presented Anne with a silver-gilt cup weighing over thirty ounces. This was a large gift for one of the queen’s ladies, as Neil Samman points out, but the list is not complete, as Samman also notes; it represents the work of only one of several goldsmiths employed to make gifts from the king that year. Anne’s gift was dwarfed by that given to Catherine of Aragon: two great pots weighing over 575 ounces and costing over 143 pounds. Moreover, both Anne and her sister Elizabeth gave Henry New Year’s gifts in 1513, so it is possible that Elizabeth received an unrecorded gift comparable to that of her sister.

Anne’s name continued, however, to be linked with that of William Compton, even after 1513 when he married a lady with the unmelodious name of Werburga, who was the widow of Sir Francis Cheyne and the daughter of Sir John Brereton. At some unspecified date, according to Barbara Harris, Compton took the sacrament as proof that he had not committed adultery with Anne. Whether or not this was true, in 1523, Compton made a will in which he left Lady Hastings a life interest in part of his land, which, as Harris notes, was highly unusual for a man to do for a woman who was not a close relation. Compton, who died of the sweating sickness in 1528, also specified that masses be said for the souls of the king, the queen, and Lady Hastings, as well as the souls of himself and his wife.

Whatever happened or did not happen between Anne, Henry, and Compton, Hastings appears to have borne a great deal of affection toward Anne. In a 1525 letter quoted by Harris, he wrote, “with all my whole heart, I recommend me unto you as he that is most glad to hear that you be merry and in good health,” and in his will he treated her most generously and named her as one of his executors. The couple had eight children; their eldest son, Francis, was born in 1513/14. Their grandson Henry Hastings, the third Earl of Huntington, married Katherine Dudley, the youngest surviving daughter of the Duke of Northumberland, as part of the triple wedding that starred Guildford Dudley and Jane Grey. Another Hastings grandchild, Mary, received a proposal from Ivan the Terrible, much to her dismay; fortunately, Queen Elizabeth shared Mary’s distaste for the match and fended off the czar.

7 thoughts on “Was Henry VIII Having an Affair with the Duke of Buckingham’s Sister?”