Whatever one believes about the guilt or innocence of Mary Surratt, her daughter, Anna, is surely deserving of our sympathy. On July 6, 1865, she had been given the horrifying news that her mother would be executed; the following day, despite Anna’s desperate efforts to beg for her life, the sentence was carried out.

Anna was left not only to grieve, but had to figure out how to salvage a future for herself. Her mother had gone to the gallows heavily in debt; most of the boarders at the H Street townhouse once frequented by John Wilkes Booth had gone elsewhere; and John Lloyd, the tenant who rented the Surratt tavern in southern Maryland, had his own troubles, having been imprisoned and given testimony at the conspiracy trial which revealed him as a hopeless alcoholic. Neither of Anna’s two brothers could help her: Her older brother, Isaac, had been serving with the Confederate army and had yet to make his way home, and her younger brother, John, was a fugitive who himself was in danger of hanging if he were caught. Anna would have to rely on her mother’s relations and family friends to get through the coming months.

Meanwhile, however, Anna had one immediate goal: giving her mother a proper burial. Accordingly, on July 8, 1865, the day after her mother’s death, she roused herself and wrote this letter (held by the Library of Congress): 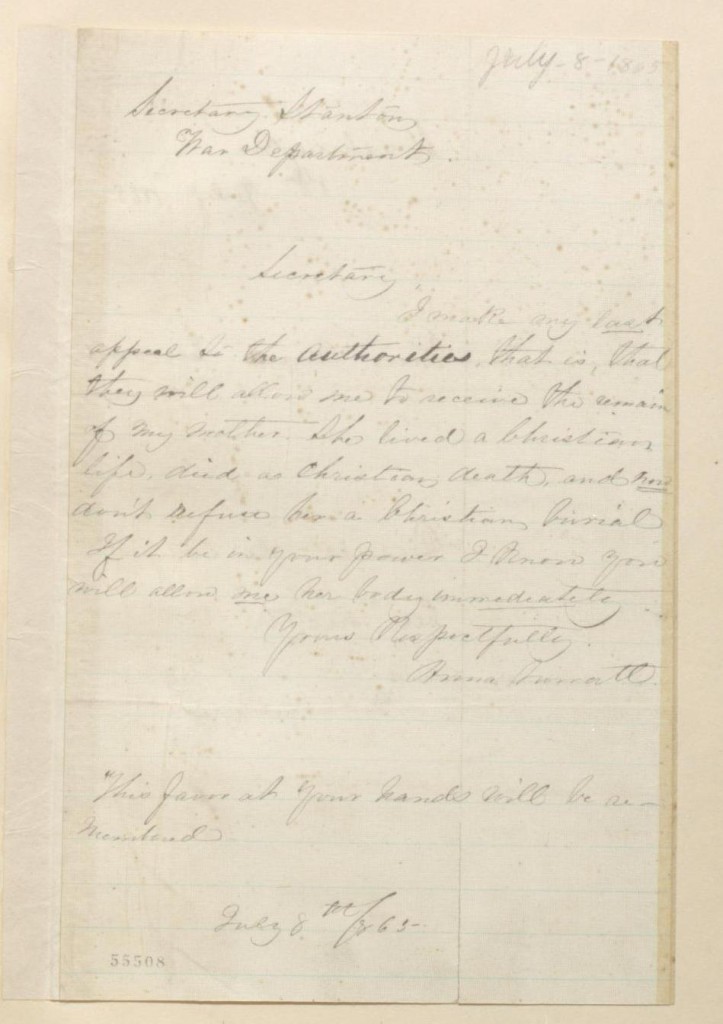 This favor at your hand will be remembered.

Edwin Stanton, Secretary of War, was not inclined to give in to this appeal, however. Mary Surratt had had her sympathizers, and the last thing he wanted was to see them flocking to her grave and giving her the status of a martyr. Only in 1869, when President Johnson at last allowed Anna to bury her mother in a place of her own choosing, would Anna get her wish.

The next day, Anna wrote another letter, this time to General John Hartranft, who had been in charge of the Old Arsenal Prison where Mary Surratt spent her last weeks.

Genl. Hancock told Mr. Holohan [a boarder at the H Street house]  that you had some things that belonged to my poor Ma, which, with my consent you would deliver to him. Don’t forget to send the pillow upon which her head rested and her prayer beads, if you can find them–these things are dear to me.

Someone told me that you wrote to the President stating that the prisoner Payne had confessed to you the morning of the Execution that Ma was entirely innocent of the President’s assassination and had no knowledge of it. Moreover, that he did not think that she had any knowledge of the assassination plot, and that you believed that Payne had confessed the truth. I would like to know if you did it because I wish to remember and thank those who did Ma the least act of kindness. I was spurned and treated with the utmost contempt by everyone at the White House.

Remember me to the officers who had charge of Ma and I shall always think kindly of you.

On July 16, 1865, General Hartranft, preparing to leave his post, informed General Hancock that he had turned over the effects of the executed prisoners to their relatives. Anna had succeeded in one mission at least.

Edward Steers and Harold Holzer, The Lincoln Assassination Conspirators: Their Confinement and Execution as Recorded in the Letterbook of John Frederick Hartranft.

3 thoughts on “Two Letters from a Grieving Daughter”