First, let me make it clear that I take no credit for busting the three myths that I am about to discuss: all three have been previously addressed by other authors. Nonetheless, whenever I do a search on Frances Grey, Duchess of Suffolk (nee Brandon, mother of Jane Grey), I run across all three of them, so I will discuss them here in an effort to counter all of the nonsense that a search brings up.

Myth #1: Frances Grey married her second husband, Adrian Stokes, within three weeks of the executions of her daughter and her first husband in February 1554. (One source I ran across last night has Frances rushing to the altar within 10 days of the executions.) In fact, as Carl T. Berkhout, Leanda de Lisle, and Eric Ives have each pointed out recently, the marriage did not take place until March 1555 or possibly even later. Indeed, as late as April 21, 1555, Simon Renard was reporting to Charles V, the Holy Roman Emperor, “It has been proposed that [Edward] Courtenay might be married to the widow of the last Duke of Suffolk, who comes next to the daughter of Scotland in line of succession to the crown.”

But what of the story that Frances had a child by Stokes born in 1554? Notes and Queries from December 8, 1855, citing Cole’s Escheats, notes that Frances and Adrian did indeed have a daughter, Elizabeth, who died in infancy on February 7, 1556–a death date entirely compatible with a 1555 marriage. I have yet to find a source that supports the statement that Frances bore a child in 1554.

Myth #2: Adrian Stokes was half Frances’s age. Not only is Frances said incorrectly to have rushed to the altar after the executions of February 1554, she’s accused of doing so with a boy-toy. In fact, Carl T. Berkhout has found that Laurence Nowell, a contemporary of Stokes, recorded the exact day and hour of Stokes’ birth in a horoscope: 8 p.m. on March 4, 1519. This makes Stokes less than two years younger than Frances, born on July 16, 1517. Both parties, therefore, were in their mid-to-late thirties when they married.

Myth #3: A double portrait of a double-chinned woman and a much younger man is that of Frances and Adrian. As readers of Josephine Tey’s The Daughter of Time know, a bedridden Inspector Grant spots a portrait of Richard III and decides that he must have been a decent chap after all, and proceeds to assemble evidence to that effect. The portrait below has caused many an author to do some reverse Inspector-Granting with Frances. Richard Davy, for instance, notes the “very sinister expression” in Frances’s eyes. 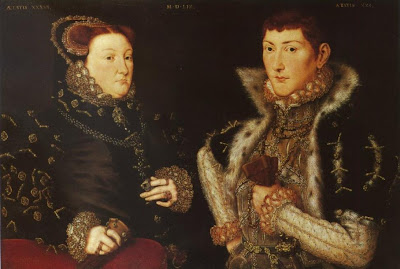 All of these physiognomic efforts, however, have been wasted, for the portrait was re-identified in 1986 by Susan Foister as being that of Mary Neville and her son, Gregory Fiennes–not of Frances and Adrian at all. An actual portrayal of Frances Brandon–the figure on her tomb in Westminster Abbey–could not be more different from the portrait that is still misidentified as her on various sites.

Leanda de Lisle, The Sisters Who Would Be Queen: Mary, Katherine, and Lady Jane Grey.

7 thoughts on “Three Myths About Frances Grey, Duchess of Suffolk”