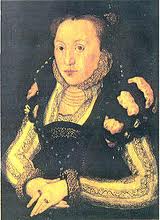 On April 20, 1578, Mary Grey, the youngest daughter of Henry Grey, Duke of Suffolk, and Frances Brandon, died at her house in St Botolph’s-without-Aldersgate in London. Unlike her older sisters, Jane and Katherine, Mary died a free woman.

In 1565, while at the court of Elizabeth I, Mary had married Thomas Keyes, the sergeant porter at court. Their timing was extraordinarily poor, as Mary’s sister Katherine had already been confined for making a match without royal permission. Elizabeth was no happier over Mary’s match with Keyes, and the newlyweds were duly imprisoned.  Keyes was freed but died in 1571, having never been allowed to live with Mary as his wife. Mary was released in 1572. After staying with her stepfather, Adrian Stokes, for a time, she set up her own house in London, where she died at around age thirty-three. Three days before her death, she drew the following will.

The will was transcribed by W. L. Rutton and appears in the October 20, 1894, issue of Notes and Queries. For readability, I have broken up the various provisions into separate paragraphs.

Most of the people named in the will had close connections to Mary’s family. Katherine, Duchess of Suffolk, had been married to Charles Brandon, Duke of Suffolk, after the death of his wife Mary Tudor and thus was Mary’s step-grandmother. After Brandon’s death, Katherine married Richard Bertie and had two children by him, Susan and Peregrine. Susan was the Countess of Kent named by Mary. Peregrine’s wife, Mary, was Mary de Vere, daughter of John de Vere, sixteenth earl of Oxford.

The Countess of Lincoln was Elizabeth Fitzgerald, married to Edward Clinton, Earl of Lincoln.

Lady Arundel is identified by Leanda de Lisle in The Sisters Who Would Be Queen as Mary’s cousin Margaret Willoughby, married to Sir Matthew Arundel. Lisle identifies Lady Stafford as Dorothy Stafford, a sister of the rebel Thomas Stafford and a long-standing attendant upon Elizabeth I.

Lady Throckmorton was the former Anne Carew. She was the second wife of Mary’s stepfather, Adrian Stokes.

Jane Merrick was a daughter of Thomas Keyes and thus was Mary’s stepdaughter. Mary Merrick, Mary’s namesake and goddaughter, was Jane Merrick’s daughter.

Blanche Parry, who had served Elizabeth since the future queen’s infancy, was chief gentlewoman of the queen’s privy chamber from 1565 on.

The Will of Mary Grey

In the name of god Amen the xvij daye of Aprill in the years of our lord god 1578 And in the XXth years of the Raigne of our Soveraigne Ladye Elizabethe by the grace of god of England Fraunce and Irelande Queene defender of the faithe I the Ladye Marye Greye of the p’ishe of St. Botolphe wthout Aldersgat in the Citie of London widowe of wholl minde and of good and perfect remembraunce laude and praise be unto Almightie god therfor doe ordaine and make this my last will and testamente in manner and forme followinge repealinge herbie and utterlie revolkinge all former willes and testamentes whatsoever hertofor by me made and ordained

Itm. I will that all such debtes and duties as of right and consciens I doe owe unto any personn or persons be well and trulie contented and paide by myne execntores herafter by me made and ordained

Itm. I geave to my verie good lady and cosenne the countesse of Lincolne one girdle of gouldsmithes worke set all wth pearle and buttons of gould

Itm. I geave to my verie good l. and sister my l. Marie Bartye and to Mr Peregrine Bartye her husband my best gilt cupe and my best saltceller of sylver and gilt

Itm. I geave to my verie good I. and cowsene my I. Stafford a tablet of gould wth an aggett in it

Itm. I geave to my verie good l. my l. Arrundell one tankarde of sylver and gilt

Itm. I geave to my l. Margaret Nevell a traine kirtle of yellowe vellet wth a foreple belonginge to it of the same

Itm. I geave unto her more one petticotte of crimson satten garded about wth a blacke gard of vellet and a gould lace ymbrothered uppon the same

Itm. I geave to my verie good l. my l. Throckmortonne a boulle of silver and gilt wth a cover

Itm. I geave to my verie frend Mrs Blaunche a Parre a little gilt bowlle wth a cover to it

Itm. I geave to my verie good cowsenn Mrs Duport the elder one standinge eup of silver and gilt wth a cover

Itm. I geave more to my cowsenn Mrs Hall a gowne of blacke vellet set about wth buttons and a blacke vellet kirtle layed about wth a purple and blacke silke billmmer lace

Itm. I geave to my daughter Janne Merrick one good fethered bedde and a boulstere to the same and the three peres of hangings wch I have of myne owns and a cowple of covered stoolles

Itm. I will that the leasse of my howse wherin I now dwell be sould and the money comminge therof after the rent is paid I that is due to the landlord alreadie I geave the residue to Marrie Merrick my goddaughter to be kepte in the hand of my cowsen Edmond Haull to the use and behoof of the child untill suche tyme as shee either be married or accomplishe the tearme of xxj years

Itm. I geave to Marrie Fulleshurst xls And unto her sister Margaret Fulshurst vjl xiiis iiijd wch I will to be delivered to my cosenn Mr Toms. Duport to keepe and occupie for the wenches behalf untill suche tyme as thei either be married or accomplishe the tearme of xxj years

Itm. I geave to Rachell Broune iiijl to be likewise kepte in the handes of my cosen Edmond Hall to the use and commoditie of the wenche untill thee come either to be married or els to the tearme of xxj yeares as aforesaid

Itm. I giue to Anne Gouldwell my servant half a dozen of silver spones and twoe trenchers plattes of silver

Itm. I giue to Katherin Duport my servant one trencher platte of silver gilt about the eddge

Itm. I giue to Robt. Savell my servant my blacke coatche geldinge with my coatche and furniture belonging

Itm. I giue unto William Parfoot [qy.; Parpoint erased] iiijl to binde him prentice to some good occupacon suche as my executores shall thinke meet and convenient

Itm. the residue of all my goodes and catteles boths moveable and immoveable leasses houshould stuffs jeuelles platte money dettes and all other my goodes by whatsoever name or names thei beare or ought to be called wch either I be myself or by myne owne handes have not geaven or befor in this my last will and testament not bequeathed or assigned I will that of the same be made the most that can be And my debtes being paide my funerall charges & expenses performed And theiss my legacies contaigned in this my p’sent testament fufiiled I will that the same be equallie devided amongst my forsaied servants

And the rest not named by the hands of my trustie and welbeloved cowsens Mr. Edmoud Hall and Mr. Thomas Duport esquires whome I constitude ordaine and make my executores of this my p’nt last will and testament hoping thei will finishe and accomplishe the same according to the effectes and my true meaninge herine as my assured hope and speciall trust is therin.

In witnesse wherof that this is my verie true last will and testament I have hereunto subscribed my name and set to my seall the day and yeare furst above written.

9 thoughts on “The Will of Mary Grey”