As readers of this blog know (I was going to say “regular readers,” but this blog has been a bit, er, irregular over the past few months), I’m very fond of wills. When I was researching Margaret Douglas, Countess of Lennox,  for a now-defunct project, I had her will transcribed, and it’s been sitting forlornly in my files ever since. So here it is! I’ve modernized the spelling and broken it into paragraphs for ease of reading.

Margaret died on March 9, 1578, having made her will on February 26, 1578. Note that the new year officially began on March 25, so Margaret gives the date of her will as 1577. She was buried at Westminster Abbey at the expense of Queen Elizabeth. Later, King James VI and I (the King of Scots mentioned by Margaret) erected a monument to his grandmother’s memory. 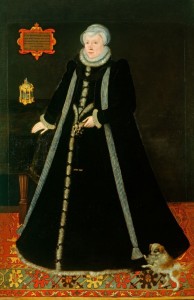 In the name of God Amen I Margaret Countess of Lennox widow late wife of Matthew Earl of Lennox Regent of Scotland deceased, being of good and perfect mind and remembrance and in good health of body (thanks be to Almighty god) the six and twentieth day of February in the year of our lord God a thousand five hundred seventy and seven [new style date: 1578] and in the twentieth year of the reign of our sovereign lady Elizabeth by the grace of God queen of England France and Ireland defender of the faith etc do make, ordain and declare this my present last will and testament in manner and form following

First I bequeath my soul unto Almighty God my savior and redeemer, And my body to be buried in the great church of Westminster in the monument, sepulcher or tomb, already bargained for, and appointed to be made and set up in the said church. Also I will that the body of my son Charles shall be removed from the church of Hackney and laid with mine both in one vault or tomb in the said church of Westminster / And I give appoint and bequeath for my burial and funerals to be bestowed and employed thereupon the sum of twelve hundred pounds alias one thousand two hundred pounds of lawful money of England to be made and furnished of my plate household stuff and movables to be sold therefore / And I will that forty pounds of the said twelve hundred pounds shall be given and distributed to the poor people at the day of my burial / And that there be one hundred gowns furnished and given to a hundred poor women at the said day of my burial to be paid for and furnished of the said sum of Twelve hundred pounds.

Also I give and bequeath to the king of Scots for a remembrance of me his Grandmother my new fielde [field? filled?] bed of black velvet embroidered with flowers of needle work with the furniture thereunto belonging as curtains, quilt, and bedstead, but not any other bedding there unto / And the same to be delivered to the said king within six months after my decease if God shall grant him then to be living.

Also I give and bequeath to Margaret Wilton my woman (if she be with me in service at the time of my death) the sum of fifty pounds of lawful money And to every other servant of mine (as well women as men) that at the time of my decease shall be in my service ordinary, one year’s wages according to the rate of their entertainment they then have of me yearly. Also I give and bequeath to old Mompesson my servant (if then at my death he shall be living) twenty pounds of lawful money / All and every which sums I will to be made raised paid and satisfied of my household stuff with in any my houses wheresoever to be sold therefore within one year next after my burial and Funerals performed as aforesaid / Also I give and bequeath to Thomas Fowler my servant for his good and faithful service done to me and mine many years past all and every my stock of sheep as well young as old of all sorts and kinds / And now in the use and custody of Lawrence Nessebett, Symonde Doddesworth and Rowland Fothergill and every or any of them within and upon my lordship of Settrington in the County of York being in number eight hundred at six score to the hundred / And where I owe unto the said Thomas Fowler my servant seven hundred threescore eighteen pounds and fifteen shillings of lawful money of England upon the determination of his last account made and cast up by my auditor at my audit held at Michaelmas last past which debt I acknowledge to be due and owing to him by me I will that the same sum of money as my due debt be paid and satisfied to the said Thomas Fowler of my goods, chattels, plate and jewels / Also I give and bequeath to the said Thomas Fowler all my clocks, watches, dials with their furnitures.

And I make ordain will constitute and appoint John Kaye of Hackney Esquire and the said Thomas Fowler my full and lawful executors / And I give and bequeath to the said John Kaye for his pains forty pounds to be made of my goods as aforesaid / And I will, ordain and provide my very good Lords William Lord Burghley Lord Treasurer of England, and Robert Earl of Leicester my overseers / And I give and bequeath to them for their pains viz to the said Lord Treasurer my Ring with four diamonds set square therein black enameled and to the said Earl of Leicester my chain of pomander beads netted over with gold / And my tablet with the picture of King Henry the eighth therein / All the rest of my jewels goods chattels movable and unmovable, my funerals and legacies performed and my due debts paid I give and bequeath to the Lady Arbell Daughter of my son Charles deceased / Provided always and I will that where the one of my said Executors Thomas Fowler hath for sundry and divers bargains made for me and to my use by my appointment, authority and request entered into sundry bonds and covenants of warranties in sundry sorts and kinds that by law he may be challenged and constrained to answer and make good the same he the said Thomas Fowler my said executors shall out of my said goods, chattels movables plate and jewels whatsoever be answered allowed satisfied recompensed and kept harmless from any loss recovery forfeiture actions suits demands whatsoever may be and shall be of and from him my said executor lawfully recovered and obtained by any person or persons at any time or times after my decease / And provided also and I will that the rest and portion of my jewels, goods or movables whatsoever shall fall out to be shall remain in the hands, custody and keeping of my said executor Thomas Fowler until the said Lady Arbell be married or come to the age of fourteen years, to be then safely delivered to her if God shall send her then and so long to be living.

In witness whereof, and that this is my lawful last will and testament made and determined advisedly by good deliberation, and upon good considerations / I the said Lady Margaret being in good and perfect health and memory have put here unto my hand and seal of arms, the day and year above expressed and specified / witnesses to the same these persons hereafter subscribing their names.

Memorandum that whereas this will was sealed up with a label and the seals of D. Huicke and D. Caldwall set unto or upon the same label the eleventh of March 1577 [1578] the said D. Huicke and D. Caldwell were present at the breaking up of the same label and did acknowledge the same to be sealed with their seals / And that the testament within written was before them and others whose names be endorsed, acknowledged by the within named Lady Margaret to be her last will and testament / In the presence of me William Drurye Doctor of the law and other witnesses underwritten Robert Huicke Richarde Caldwall, Robert Boys N. Paine, Robert Weldoms / Witnesses to this her grace’s last will and Testament are we whose names be underwritten Margery Will[ia]ms Robert ?Hewicke, Richarde Caldwall, John Wolpe, Lawrence Nessebett / Will[ia]m Mompesson

Translation of the probate

This testament was proved at London before master William Drurye, doctor of laws, commissary of the Prerogative Court of Canterbury, on the 27th day of the month of March in the year of the lord 1578 by the oath of Thomas Fowler, the executor, named in this will. To whom was committed the administration, etc, sworn, etc, well, etc, with John Key, the other executor, renouncing [the will].

10 thoughts on “The Will of Margaret Douglas, Countess of Lennox”