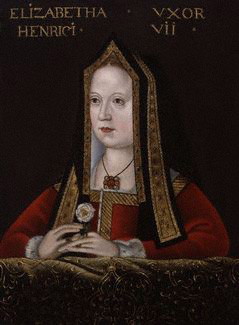 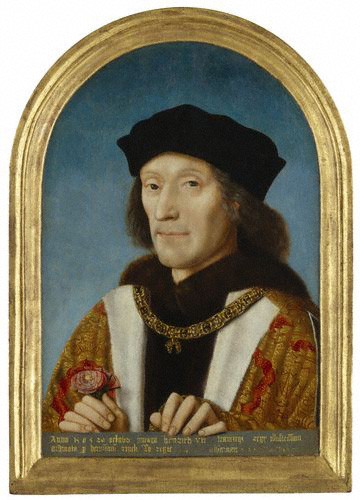 Little is known about the ceremony, but the union itself was celebrated in a lengthy Latin epithalamium  (a poem in honor of a bride and bridegroom) by Giovanni Gigli, the papal collector for England and a future Bishop of Worcester.  In her Memoirs of the Queens of Henry VIII, and His Mother, Elizabeth of York, Agnes Strickland included translations of a few stanzas, some of which appear below:

Hail, ever honoured and auspicious day,

When in blest wedlock to a mighty king—

To Henry—bright Elizabeth is joined,

Fairest of Edward’s offspring, she alone

So here the most illustrious maid of York,

Deficient nor in virtue, nor descent

Most beautiful in form, whose matchless face

Adorned with most enchanting sweetness shines;

Her parents called her name Elizabeth,

And she, their first-born, should of right succeed

Her mighty sire. Her title will be yours

If you unite this princess to yourself

Oh! my beloved, my hope, my only bliss,

Why then defer my joy? Fairest of kings,

Whence your delay to light our bridal torch?

But one in mind, in equal love the same.

Your sad Elizabeth entreats—and you

Will not deny Elizabeth’s request,

For we were plighted in a solemn pact,

Signed long ago by your own royal hand.

How oft with needle, when denied the pen,

Has she on canvass traced the blessed name

Of Henry, or expressed it with her loom

In silken threads, or ‘broidered it in gold;

And now she seeks the fanes and hallowed shrines

Of deities propitious to her suit.

Imploring them to shorten her suspense,

That she may in auspicious moment know

The holy name of bride.

And keep them ever pure. Oh! royal maid,

Put on your regal robes in loveliness.

A thousand fair attendants round you wait,

Of various ranks, with different offices,

To deck your beauteous form; lo, this delights

To smooth with ivory comb your golden hair,

And that to curl and braid each shining tress,

And wreath the sparkling jewels round your head,

Twining your locks with gems. This one shall clasp

About your snowy neck, while that unfolds

The robes that glow with gold and purple dye,

And fits the ornaments, with patient skill,

To your unrivalled limbs; and here shall shine

The costly treasures from the Orient sands,

The sapphire, azure gem, that emulates

Heaven’s lofty arch, shall gleam, and softly there

From the pure gold.

[Not bad for a churchman, eh?]

2 thoughts on “The Wedding that Beget a Dynasty”