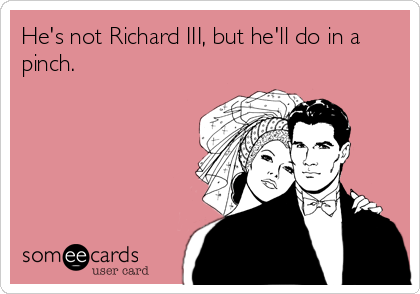 As most regular readers of this blog have gathered, I’m not a great admirer of Richard III, though I find the man and his times fascinating and am very grateful for the work of the Richard III Society in making more information about both available. And while I’m not keen on the man himself, I do have a number of Ricardian friends, with whom I have passed many entertaining and enlightening moments online (and sometimes offline as well).

There is, however, a very small subset of Ricardians whose feelings for Richard III go far beyond the bounds of mere admiration or interest. For this minority, someone (not me, sadly) has coined the brilliant phrase, the “Brides of Gloucester.” For these folks, nothing but abject, slavish devotion to the king will do, and woe betide anyone who might hold a different opinion.

Now, having read this far, you might be sitting up straighter and worrying, “Could I, with my boar badge and my penchant for white roses, be a Bride of Gloucester?” In order to ease your mind (or not, as the case may be), I therefore am providing you with a public service. If you can answer three or more of these questions with “yes,” you may want to find a new interest, such as learning to become a tattoo artist. (No, a portrait of Richard III would NOT look good tattooed on your back. Don’t even think about it. At least have the decency to settle for a simple white rose.) If you can’t–you’re in the clear. Heck, you might even come to have a sneaking admiration for Margaret Beaufort.