The failed conspiracy to kidnap President Lincoln in 1865, and the conspiracy to assassinate him which grew out of the first, drew a host of disparate people into their orbit. Among them was a Catholic schoolteacher named Anna F. Ward.

Born in 1834 (according to her death certificate), Anna Ward emigrated with her parents, William and Elizabeth Ward, from Ireland as a child; her sister, Margaret Mary, was born in Baltimore in 1841. By 1860, Anna was working as an assistant teacher at St. Mary’s Female Institute in Bryantown, Maryland, where Mary Surratt’s daughter, Anna Surratt, was a pupil. Left in debt after her husband died in 1862, Mary was in arrears on Anna Surratt’s tuition long after her daughter left school; in 1863, she made a payment to the headmistress through Anna Ward. In 1865, Anna Ward testified that she had known Mary for six to eight years.

Mary and her children moved from their tavern in Prince George’s County, Maryland, to Washington, D.C., in the fall of 1864. Anna Ward had also moved to the city, where she was employed in 1864-65 as a teacher at the Visitation School for Girls at 10th and G Streets. A pupil of Anna’s, Harriet Riddle Davis, described Anna years later as “a tall, angular young woman” with a “stern, even haggard” face and a “restless, nervous way of looking about.” She added that Anna had a “certain breezy energy in her way of teaching that made even the most idle among us know that there could be no trifling.”

When not at her teaching duties, Anna Ward occasionally visted Mary Surratt at her H Street boardinghouse. Anna also was an acquaintance of Mary’s son John, who evidently found the respectable schoolmarm to be a useful cover for his treasonous activities. In December 1864, John Surratt had met the well-known actor John Wilkes Booth, and the men had begun plotting the kidnapping of President Lincoln. In March 1865, it became necessary to find another conspirator, Lewis Powell, a place to stay in Washington, and the Herndon House, a large boardinghouse, was chosen as his residence. Louis Weichmann, a resident of Mary Surratt’s boardinghouse and a friend of John Surratt, testified:

Q. Do you remember having gone with John H. Surratt to the Herndon House for the purpose of renting a room?
A. Yes, sir.
Q. What time was that?
A. It must have been on or about the 19th of March.
Q. For whom did he wish to rent this room?
A. He went to the door, and inquired for Mrs. Mary Murray; and when Mrs. Mary Murray came, he stated that he wished to have a private interview with her. She did not seem to comprehend; and said he, “Perhaps Miss Anna Ward has spoken to you about this room. Did she not speak to you about engaging a room for a delicate gentleman, who was to have his meals sent up to his room?” Then Mrs. Murray recollected: and Mr. Surratt said that he would like to have the room for the following Monday.

Testifying for the defense at the same trial, Anna Ward admitted to inquiring about a room at the Herndon House, but did not know exactly when, other than it could have been February or March. She denied knowing that the room was for a man, and claimed that she did not know who the room was for.

News of the surrender at Appomattox reached Washington on April 10. That day, Harriet Riddle Davis recalled, Anna “came to the school jaded and excited, and after locking the door, got us little children around her and made her, to me, never-forgettable prayer. She prayed for eight lost souls about to be sent into eternity. She prayed for a city about to be plunged into darkness. Meantime the guns around the city were booming out the surrender.”

Anna dismissed her bewildered students. That same day, according to Louis Weichmann, she came to the Surratt boardinghouse bearing a letter from John Surratt, who was then in Canada on business for the dying Confederacy, which he had served as a courier. Anna testified later that during his stay in Canada John Surratt had sent her four letters, two addressed to her and two to be delivered to Mary Surratt. John Wilkes Booth had also stopped by the boardinghouse and, as reported by Weichmann, took an interest in the letter, asking Anna to let him see the address of “that lady” again. “When Booth and Miss Ward had departed, Miss Anna Surratt said, ‘Mr. Weichmann, here is a letter from brother John,’ and I read the letter which Booth had returned to Miss Ward. No lady’s name was mentioned in it.” John Surratt, Weichmann surmised in his memoir, was using Anna “as a tool, and appeared to have adopted the plan of sending his letters in her care instead of forwarding directly to his own home.”

On April 14, Good Friday, Anna Ward brought a second letter from John Surratt to his mother. Its contents, as recalled by Weichmann, were innocent enough: Surratt admired the city of Montreal, mentioned that he had bought a French pea jacket, and complained about the high cost of lodging. Mary Surratt was not home to receive this missive; she had gone to her tavern in Maryland. John Lloyd, her tenant, would later testify that Mary told him to have some guns and whiskey ready for a party who would call for them that evening. That night, John Wilkes Booth assassinated President Lincoln, and Booth duly stopped by the tavern afterward to get the items named by Mary.

Mary Surratt was arrested on April 17. Later, a former slave named Rachel, aka Eliza Hawkins, testified that she went to the boardinghouse on the morning of Tuesday, April 18, to get her young daughter, a servant there, and was told by the soldiers guarding the house that anyone who went there could not come out. She testified that Anna Ward was detained after coming to the boardinghouse that day. Anna’s detention must have been brief, because she was back at her job on May 1, when General Augur ordered two officers to “at once proceed to the convent Cor. of 10th and ‘G’ St. this city and examine the baggage of Miss Annie Ward, Teacher and arrest her.” One can safely guess that having a lay teacher hauled away by soldiers was a novel occurrence at the convent.

Anna was probably not confined for long. Despite the evidence that Anna had helped to secure lodgings for Lewis Powell–who had tried to murder Secretary of State William Seward at the same time Booth was shooting Lincoln–and the fact that she had been the intermediary for letters between John Surratt and his mother, she was not charged with any crime, although the government took the opportunity to cross-examine her about her actions at the conspiracy trial of 1865, where she testified for the defense. Much of her testimony concerned Mary Surratt’s poor eyesight, which her attorneys were using to explain why Mary had not recognized Powell, who had lodged with her, when he turned up at the boardinghouse on April 17. Anna claimed that she knew that Mary was near-sighted because she was too: “[O]n one occasion, something was pointed out to me, and I was laughed at for not seeing it, as it was pretty close by; and she then said she supposed I was something like herself.”

Neither Anna’s testimony nor anyone else’s saved Mary from the gallows. John Surratt, meanwhile, had gone into hiding when he realized he was a suspect in Lincoln’s assassination. Having fled abroad, he was eventually captured and was brought to trial in 1867. Anna was not called by either side to testify, although her name came up at trial on several occasions. She was not entirely hidden from public view that year, however. On September 9, 1867, she wrote a letter to President Johnson, telling him that in February, a man calling himself Mr. Morrison had come to the boardinghouse where she lived and said that he was in possession of information that could acquit John Surratt and wanted a meeting with him. Anna, rightfully wary, advised the man to speak to Surratt’s lawyers, but Morrison persisted in trying to get Anna Ward to introduce him to Anna Surratt. Anna Ward concluded that the man was attempting to implicate President Johnson in the assassination of his predecessor.

After this communication, Anna Ward resumed her quiet life. For years, she worked as a music teacher in Washington. Her widowed father, who died in 1879, willed his house to Anna and her sister (who worked as a Treasury clerk), and the two women lived together at 230 Maryland Avenue N.E. until 28 September 1916, when Anna died at age 82. She was buried at Mount Olivet Cemetery, where Mary Surratt was also buried. Her sister survived until 1925. 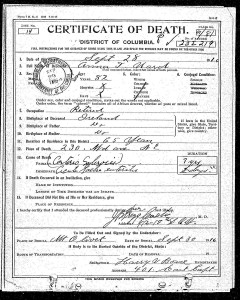 Harriet Riddle Davis, who due to Anne’s continued residence in Washington had concealed Anna’s name in giving a speech about her wartime recollections in 1900, wrote an article in 1922 in which she revealed Anna’s identity. Writing that Anna’s prayer had frightened her but that no one at the time had paid her any mind, she added, “It was not till two years later, when John H. Surratt was captured and brought to trial, that my story was recalled, or had any meaning for anybody. The trial was over, the jury was out, and my father [who was involved in the prosecution] feeling much depressed and sure that Surratt would be acquitted, said in my hearing, ‘If we could only have got hold of Anna Ward and put her on the stand we might have forced the truth.’ At the name, I again felt all the old horror, and again repeated my story — It was too late.”

Sources:
Harriet Riddle Davis, “Anna Ward’s Prayer: An Unwritten Chapter of the Assassination,” The Magazine of History: With Notes and Queries, 1922.

Ben Perley Poore, ed., The Conspiracy Trial For the Murder of the President, and the Attempt To Overthrow the Government By the Assassination of its Principal Officers.

The Trial of John Surratt.

Louis Weichmann, A True History of the Assassination of Abraham Lincoln and of the Conspiracy of 1865.

3 thoughts on “The Schoolteacher and the Surratt Family”