As Lady Despenser mentioned on her blog a few days ago, Edward II has his very own hotel in San Francisco. But did you know that he’s not the only Plantagenet to have entered the hotel business? Lo and behold, I was flipping through an old book on Richard III this afternoon when this fell into my lap: 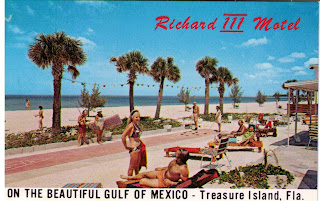 With the high importance the medieval world placed on hospitality, it seems quite fitting that at least two American inns should be named for English monarchs, though I’m not entirely sure I’d care for the room service at the Edward II hotel, and I think I’d hesitate before checking in for an extended stay at the Richard III motel. Something tells me the room rates wouldn’t be great at the Henry VII hotel, but the beds would probably be excellent at the Edward IV motel.

Any monarchs you think should join the hospitality business?

23 thoughts on “The Richard III Motel: All Rooms Double Occupancy”