At eight in the morning of Monday, August 21, 1553, ten thousand people crowded together at Tower Hill to see John Dudley, Duke of Northumberland, pay the price for having attempted to keep Queen Mary off the throne of England. As the imperial ambassadors reported it, “The scaffolding was erected; the townsmen were in arms; the people had assembled.” All was ready, down to the sand and straw to soak up the dead man’s blood.

But to the crowd’s disappointment, there would be no execution that day: instead, there would be a mass at the Chapel of St. Peter ad Vincula. As a disgusted Lady Jane Grey watched from her lodging on Tower Green,

then mr. Gage went and fetched the duke; and sir John Abridges and mr. John Abridges dyd fetche the marques of Northampton, sir Androwe Dudley, sir Herry Gates, and sir Thomas Palmer, to masse, which was sayde both with elevation over the hed, the paxe geving, blessinge, and crossinge on the crowne, breathinge, towrninge aboute, and all the other rytes and accydentes of olde tyme appertayning. And when the tyme came the prysoners shoulde receive the sacrement, the duke tourned himself to the people and saide, first, theis wordes, or suche like, “My masters, I lett you all to understande that I do most faithfullie belyve this is the very right and true waie, oute of the which true religion you and I have ben seduced theis xvj. yeres past, by the false and eronyous preching of the new prechers, the which is the onelie cause of the greate plagges and vengeaunce which hathe lighte apon the hole realme of Inglande, and nowe likewise worthelly falne apon me and others here presente for our unfaythfulnesse. And I do beleve the holye sacremente here most assuredly to be our Saviour and Redemer Jesus Christe; and this I praye you all to testifye, and praye for me.”

After which wordes he kneeled down and axed all men forgevenes, and likewise forgave all men.

Whether the duke’s religious conversion was genuine, or a desperate attempt to save his life or those of his brother and sons, will likely never be known. Taken into custody by the Earl of Arundel on July 21, Northumberland had been a prisoner in the Tower since July 25 and had had a month to contemplate his downfall; he could have easily concluded that he was being punished for his promotion of the new religion. Perhaps what had started as a gambit to win the queen’s forgiveness had turned into sincere conviction. 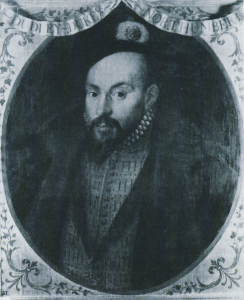 Having gratified Queen Mary by renouncing his past beliefs, the duke might have hoped for a royal pardon. He was wrong. That evening, he received the news that he was to die. Desperate, he wrote to the Earl of Arundel, who had betrayed him weeks before:

Honorable lord, and in this my distress my especial refuge; most woeful was the news I received this evening by Mr. Lieutenant, that I must prepare myself against tomorrow to receive my deadly stroke. Alas my good lord, is my crime so heinous as no redemption but my blood can wash away the spots thereof? An old proverb there is and that most true that a living dog is better than a dead lion. O that it would please her good grace to give me life, yea, the life of a dog, that I might live and kiss her feet, and spend both life and all I have in her honorable service, as I have the best part already under her worthy brother and her most glorious father. O that her mercy were such as she would consider how little profit my dead and dismembered body can bring her, but how great and glorious an honor it will be in all posterity when the report shall be that so gracious and mighty a queen had granted life to so miserable and penitent an object. Your honorable usage and promises to me since these my troubles have made me bold to challenge this kindness at your hands. Pardon me if I have done amiss therein and spare not I pray your bended knee for me in this distress, ye God of heaven it may be will requite it one day on you and yours. And if my life be lengthened by your mediation and my good Lord Chancellor’s (to whom I have also sent my blurred letters) I will vow it to be spent at your honorable feet. O my good lord remember how sweet life is, and how bitter ye contrary. Spare not your speech and pains for God I hope hath not shut out all hope of comfort from me in that gracious, princely and womanlike heart; but that as the doleful news of death hath wounded to death both my soul and body, so that comfortable news of life shall be as a new resurrection to my woeful heart. But if no remedy can be found, either by imprisonment or confiscation, banishment and the like, I can say no more but God give me patience to endure and a heart to forgive the whole world.

Once your fellow and loving companion, but now worthy of no name but wretchedness and misery.

Somewhere else in London or its environs, probably at Chelsea, Northumberland’s duchess, Jane, must have also been praying that her husband, whom she had known since she was about three and he was seven, would be spared. Having spent several days in the Tower as a prisoner herself, she had sought an audience with Mary to beg for the lives of her sons and probably of her husband as well. Five miles outside Beaulieu (New Hall) in Essex, where Mary was staying at the time, she had been turned away and ordered back to London. Literally sick with worry and frantic to save the life of the man she would describe in her will as “my lord my dear husband,” she had written her own heartfelt plea to Anne, Lady Paget. The letter (the spelling of which I have modernized) bears no date, but I believe that it was written sometime after August 18, when Northumberland had been tried and sentenced to death. The women the duchess names, Gertrude Courtenay, Marchioness of Exeter, and Susan Clarencius, were intimates of Queen Mary:

Now good madame for the love you bear to God forget me not: and make my lady Marquess of Exeter my good lady & to remember me to Mistress Clarencius to continue as she hath begun for me: & good madame desire your lord as he may do: in speaking for my husband’s life: in way of charity I crave him to do yet madame I have held up my head for my great heaviness of heart that all the world knows cannot be little: till now that indeed I do begin to grow in to weak sickness: and also such a rising in the night from my stomach upward that in my judgment my breath is like clean to go away as my women can full say it as they know it to be true by their own pain they take with me: good madame of your goodnes remember me: so God to keep your ladyship with long life with your lord & yours

& good madame desire my lord to be good lord unto my poor v sons: nature can not otherwise do but sue for  them  although  I do not so much care for them as for their father who was to me & to my mind the most best  gentleman that ever  living woman was matched withall: as neither those about him nor about me cannot say the contrary & say truly: how good he was to me that our lord & the queen’s majesty show their mercy to them

Jane’s heartbreaking letter did not succeed in saving her beloved husband’s life. Northumberland’s own plea was equally futile. The day after Northumberland wrote to the Earl of Arundel, a crowd again assembled on Tower Hill to see the duke die. This time, August 22, 1553, their vigil would not be in vain.

5 thoughts on “The Life of a Dog: The Pleas that Failed”