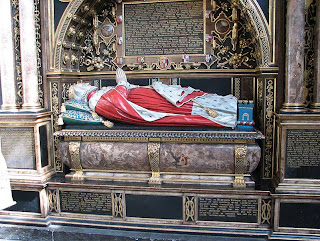 Anne Stanhope, Duchess of Somerset, will be making an appearance in my work in progress. While doing research yesterday, I stumbled upon her will, printed by John G. Nichols in an 1845 issue of the Gentleman’s Magazine. I’ll probably be posting about her more later, as she is a fascinating woman, who was the subject of a number of literary dedications and whose own daughters were highly educated. The portrayal of her in the recent television series “The Tudors” as an adulteress is entirely fanciful. From 1537 to 1550, she was busy bearing her husband, Edward Seymour, the Duke of Somerset, ten children. Edward Seymour was, of course, Jane Seymour’s brother and the uncle of King Edward VI.

For reasons that are beyond the scope of this post, Anne’s husband was executed in 1552. The duchess herself was imprisoned in the Tower, where she remained until Mary’s accession in 1553. As a prisoner, her diet included mutton, beef, veal, capon, and larks, prepared for her by her own cook; she also enjoyed the company of two gentlewomen.

In 1558, Anne married her second husband, Francis Newdegate, who had been her husband’s steward. He died in 1582, leaving her all of his estate. Famously, Anne’s son Edward, Earl of Hertford, married Lady Jane Grey’s younger sister Katherine, an escapade that landed both Hertford and Katherine Grey in the Tower. The imprisoned couple, who had conceived one son before their imprisonment, managed to conceive a second one during their incarceration. Both sons were eventually placed in Anne’s care.

Born in about 1510, Anne lived to be quite an old lady, dying on April 16, 1587. She was survived by four of her children, including the no-longer-incarcerated Earl of Hertford, who had remarried following the death of Katherine Grey. Her will, which follows, indicates that for all the vicissitudes of the duchess’s life, she did not die poor. (Do note the rope of a thousand pearls.)

[Burghley Papers, MS. Lansd. 50, art. 90.] In the name of God. Amen. The xiiij day of Julie, in the yeare of our Lord God 1586. I Anne by the goodness of God Duchess of Somerset, considering the many yeres wherwith God hath blessed me, and the sicknes wherwith I am visited, doe in perfect mynde and remembrance make this my last will and testament in manner and forme following. First, I thank God in Christ Jesus that he hath long agoe called me to the knowledge and love of the Gospell, and ever since kept me therein to an assured hope of life everlasting, thorough faith in the righteousnes of Jesus Christ alone. In which faith I recomend my bodie to the dust whence it was taken, and my soule into the most mercifull handes of him that redemed it, to be kept of him till it shalbe reunited to the bodie in that glorious daye of the resurrection of all flesh. Secondly, I geve thanks to God allso for the temporall blessings of my landes, goodes, and chatells, which I dispose to my childeren, servaunts, the poore, and others, as followeth.

First, I geve to my sonne the Earle of Hertford, and his heyres for ever, all my mansion howse situate in Chanon rowe, within Westminster, in the Countie of Middlesex, with the howsholde and furniture therof. Item, I geve him a glasse of cristall dressed with gould, a basen and ewer all gilt plaine, a payr of gilt pottes, a payer of flagons newe bought, iij gilt trenchers, a spone of gould not foulded, iiij other spones gilt antique fashion. Item, I geve him ij of the fayrest gilt bowles with covers, a salt of cristall, and my beast cheane of greate pearle with long beades of goulde betwene, a fayer juel of diamondes, and a greate pearle worth by estimation about xxx1.

Item, I geve to my sonne the Lord Henry Seymour xiij hundred powndes of lawfull English monie, over and above the vij hundred I have allreadie geven him towards the payment of his debts. Item, I geve him a fayer jewel of an egret with divers stones. Item, I geve him ij bowles of silver and gilt, with ewers, and a basen and ewer of sylver.

Item, I geve to my daughter the Ladie Marie Rogers all my lease and tearme of yeres in the manner and ferme of Ashford, in the countie of Middlesex, which I have fernied of (blank). Item, I geve her a harkenet of pearle, in number about c.c.c. two ropes of perle, in number about ij thousand, a lace with small pearle, a jewel of jacinth rownd with small pearle, a cople of bowles with covers, a spice box of sylver with the furniture of it, a ladle sylver and gilt, and my saddel embroydered with black velvet.

Item, I geve to my daughter the Ladie Elizabeth Knightley a greate cheane of pearle with true-loves, a jewel of a balist, ij great standing cuppes sylver and gilte, a jugge of stone fayer dressed with sylver and gilt, and a skellet of sylver.

Item, I geve to my sonne Beuchamp [a grandson] ij hundred powndes of lawfull English monie and a cheane of pearle and gould with friers’ knottes, the gould by estimation worth about Lxxx1.

Item, I geve to my Sonne Thomas Seymour [another grandson] a hundred powndes of lawful English monie, and a cheane worth about Lxl.

Item, I geve to my sonne Beuchampes wife a booke of gould kept in a grene purse, and a payer of bracelets without stones.

Item, I geve to my daughter Maries husband a clieane of gould black.

Item, I geve to my daughter Elizabethes husband one of my ringes that hath the best diamonds.

Item, I geve to my goddaughter Anne Knightley five hundred powndes of lawful English monie and a rope of small pearle, in number about a thousand.

Item, I geve to my Lord Treasurer a jugge of cristall with a cover dressed with sylver and gilt, and a ring with an emerald.

Item, I geve to my nephew John Stanhope the fortie powndes he oweth me.

Item, I geve to my nephew Michael Stanhope a piller of gould with viii diamondes.

Item, I geve to godly and poor students in the ij Universites xx1, x1 to the one and x1 to the other.

Item, I geve to the poor prisoners in London xx markes, willing that these ij legacies be distributed by ij godly preachers.

The rest of all my landes, tenements, rentes, plate, Jewells, with other goodes, leases, chattles, horses, mares, geldinges, oxen, shepe, and all other stock and store, together with all mony, debts, now or hereafter dew, by bonde, covenant, or otherwise, my debts and legacies being payd, I geve to my sonne the Earle of Hertford, whom I make and appoint my sole executor, to see my debts payd and my legacies faithfully performed, and my funeralls discharged according to this my last will and testament. In witness whereof, to this my last will and testament, I have subscribed my name with myne own hande, and putte my seale this daye and yere abovesayd.

Postscriptum. Memorandum, that there is no materiall enterlyning, but the gown geven to Mrs. Ashhurst, these wordes, ” lawfull English monie,” and abowt the recitall of the goodes,tenements, leases, &c. Witnesses. Tho. Penney. Tho. Muffet. W. Clarke.

Endorsed. This was acknowledged and avowed by her Grace the Duchess of Somerset to be her last will and testament, we witnesses whose names are underwritten.

8 thoughts on “The Last Will of Anne Stanhope, Duchess of Somerset”