One of my many weaknesses is eBay. A few years ago, doubtless as a reaction to turning a Certain Age, I began buying old Barbie dolls there, but this got a bit on the expensive side, not to mention the crowded side. So I’ve changed my eBay habits a bit, and now I bid mostly on books. I’ve got quite a few things there, historical fiction and otherwise, that I wouldn’t have gotten elsewhere.

Unless I’m looking for a particular book, I’ll usually just type in a search term and see what turns up. With a term like “Anne Boleyn,” that’s not a problem; almost everything that shows up is somehow related to the English queen, though as we shall soon see, sometimes in rather peculiar ways. On the other hand, “Edward II” can pull up things about the English king, but also DVD’s by a band called Edward II and the Red Hot Polkas and a line of women’s clothing (why not men’s clothing? seems a natural). “Gaveston” often brings up items relating to Galveston, Texas. And “Despenser” pulls in quite a few sellers who misspelled “dispenser.” These items raise some interesting mental pictures:

Of course, it’s easy enough to avoid results like these by limiting the search to books, but it’s not quite as much fun. And one time in one of my general searches, I came across a cast-metal figure of Hugh le Despenser’s son Hugh (d. 1349), dressed in armor and riding a destrier, which would have looked lovely perched on my hard drive. I duly put a bid in, but sadly, I was sniped. The jerk probably thought he was bidding on a toilet tissue paper holder.

In any case, did you know that Royal Doulton makes a set of figures called “Bunnykins” that include Henry VIII and all his wives? 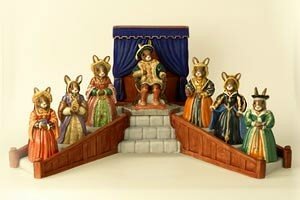 Unfortunately, I don’t think Royal Doulton has a Bunnykins figure for Edward II or his favorites. Or for any of the Plantagenet kings. Someone clearly needs to get cracking on this. Or should I say hopping?

6 thoughts on “The Joys of eBay, and Tudor Bunnies”