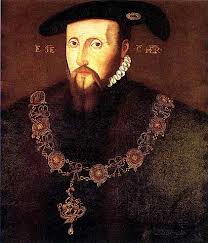 Although Henry VIII’s marriage to Jane Seymour would transform the fortunes of her oldest brother, Edward Seymour was a rising man before his sister caught the eye of the king.

Edward was born around 1500 to John and Margery Seymour, whose chief residence was Wolf Hall in Wiltshire. He was his parents’ second son; his older brother, John, died young.

It has been claimed that Edward was educated at Oxford and Cambridge, but his stays there are not documented, although David Loades notes that it was not unusual for young gentlemen to spend only a brief period at a university in order to give themselves a polish. Edward was certainly presentable enough to be chosen in 1514 as a “page of honor” to accompany Henry VIII’s younger sister Mary to France for marriage to Louis XII. Among Mary’s other attendants was a young “Mademoiselle Boleyn.” Three years later, on July 14, 1517, Edward and his father were made the joint constables of Bristol Castle.

By 1518, Edward had married Katherine Fillol and had his first son, John. A second son, Edward, followed in due course, but the marriage would prove to be an unhappy one, possibly due to infidelity on Katherine’s part, as Edward would later come to doubt the paternity of his eldest son. Much later, it was alleged that Katherine had had an affair with her own father-in-law, but there is no evidence that this story was current during the sixteenth century. Certainly nothing indicates that Edward or his father was shunned at court or that father and son were estranged, as is claimed by some popular historians. Edward did, however, repudiate his wife, whose father’s 1527 will gave her an annuity of forty pounds “as long as she shall live virtuously and abide in some house of religion of women.”

In 1523, Charles Brandon, Duke of Suffolk, led an expedition into France. Among the young men knighted by Suffolk at Roye on November 1, 1523, was Edward. Three days later, another up-and-coming young man, John Dudley, was knighted.

Before Christmas of 1524, some of the esquires of the king’s household, including Edward Seymour and John Dudley, sent Windsor Herald into the queen’s chamber to propose a feat of arms. A mock fortress, known as the Castle of Loyalty, was duly built at Greenwich, and the king himself took part in assaulting it. The chronicler Hall commented, “I think that there was never battle of pleasure, better fought than this one.”

While the assaults upon the Castle of Loyalty were taking place in January and February 1525, Edward Seymour was made a justice of the peace for Wiltshire on January 12. That same year, the king appointed him master of the horse for Henry Fitzroy, Duke of Richmond, the king’s illegitimate son. Two years later, Edward accompanied Cardinal Wolsey on an embassy to France. In September 1530, he became an esquire to the body to Henry VIII, for which he received an annuity of 50 marks.

Edward’s New Year’s gift to the king in January 1532 was “a sword, the hilts gilt with ‘kalenders’ upon it.” That same year, Henry took Anne Boleyn, soon to become his second queen, to Boulogne. Ironically, in light of later events, Edward and his father were among the entourage accompanying the happy couple abroad. Father and son each had eight attendants. When Anne was crowned queen in June 1533, Edward served as the carver for the Archbishop of Canterbury.

It was also in 1533 that Edward became involved in a messy legal dispute with Arthur, Lord Lisle, the illegitimate son of Edward IV. Lisle was the stepfather of Sir John Dudley, who held the reversion to certain land occupied by Lisle, and the dispute stemmed from Dudley’s sale of his reversionary rights to Edward Seymour. The complex dispute, detailed painstakingly by M. L. Bush, shows an unscrupulous, acquisitive side of Seymour (an aspect, admittedly, not lacking in other courtiers) and also shows Seymour’s growing influence with the king: in 1534, it was believed that the king would support Seymour over his natural uncle.  The dispute dragged on through 1537, and ended with Seymour in possession of the land in question.

Sometime before March 9, 1535, when Henry granted Edward  and his wife land in Hertfordshire, Edward remarried. His bride, about ten years his junior, was Anne Stanhope, the daughter of Sir Edward Stanhope and Elizabeth Bourchier. It has been suggested that Edward had his first marriage annulled to marry Anne, but there is no evidence of an annulment, and Edward’s marriage to Katherine Fillol had broken down years before, as evidenced by the reference in her father’s will to Katherine’s remaining in a house of religion.  Most likely, Katherine had died in her nunnery, leaving Edward free to remarry. Sir Richard Page, Anne’s stepfather, was a fellow courtier, who like Edward had served in Henry Fitzroy’s household and accompanied the king to France in 1532, so it is possible that one of the two men proposed the match to the other. Alternatively, Anne had served Catherine of Aragon, so she and Edward may have met at court and become attracted to each other of their own volition. Regarded by contemporaries as difficult and haughty, Anne was nonetheless a loyal and apparently loving wife. By November 1537, Edward and Anne had two daughters, who were brought to visit Princess Mary; they would eventually have ten children, one of whom died young.

In September 1535, Henry VIII and Anne Boleyn, on a royal progress, visited Wolf Hall, the chief residence of the Seymours. As his father’s heir, Edward probably helped host the event, and while his sister Jane is not documented as being present, it seems likely that she would have been there as well, as one of Queen Anne’s ladies.

When the king started taking an interest in Edward’s sister is unknown, but by February 10, 1536, Chapuys was reporting “the treatment shown to a lady of the Court, named Mistress Semel, to whom, as many say, he has lately made great presents.”

Less than a month later, on March 3, Edward Seymour was made a gentleman of the king’s privy chamber—a position that that the late Eric Ives, in a rare moment of unkindness, suggested that he used to his advantage to act as his “sister’s ponce.” Henry, however, having interested himself in Jane, was probably quite capable of managing his new amour without brotherly assistance from Edward—as, perhaps, was Jane herself. On April 1, Chapuys reported that the king had sent Jane a purse full of sovereigns and a letter, which Jane returned to the messenger with the declaration that “she had no greater riches in the world than her honor, which she would not injure for a thousand deaths, and that if he wished to make her some present in money she begged it might be when God enabled her to make some honorable match.” As Chapuys went on to note, Henry was so impressed by this that he declared that he would speak to Jane only in the presence of her relations, to which purpose he ordered Thomas Cromwell to vacate his chambers at Greenwich in favor of Edward Seymour and his wife, so that the king could visit Jane in their presence.

Edward and his lady, of course, were not required to act as chaperones for long. Following Anne Boleyn’s arrest and execution, Henry married Jane Seymour on May 30, 1536 (not, as is often claimed, the day after Anne’s execution). A few days later, on June 5, Henry made his new brother-in-law Edward Viscount Beauchamp of Hache. On October 18, 1537, soon after Jane presented the king with a son, Henry created Edward Earl of Hertford. Nonetheless, Edward still had a long way to go in his career: in 1538 an observer, describing the various noblemen about court, declared him to be “young and wise, of small power.” A decade later, however, Edward Seymour, as Protector for his nephew, would be the virtual ruler of England.

Letters and Papers of Henry VIII.

2 thoughts on “The Early Career of Edward Seymour”