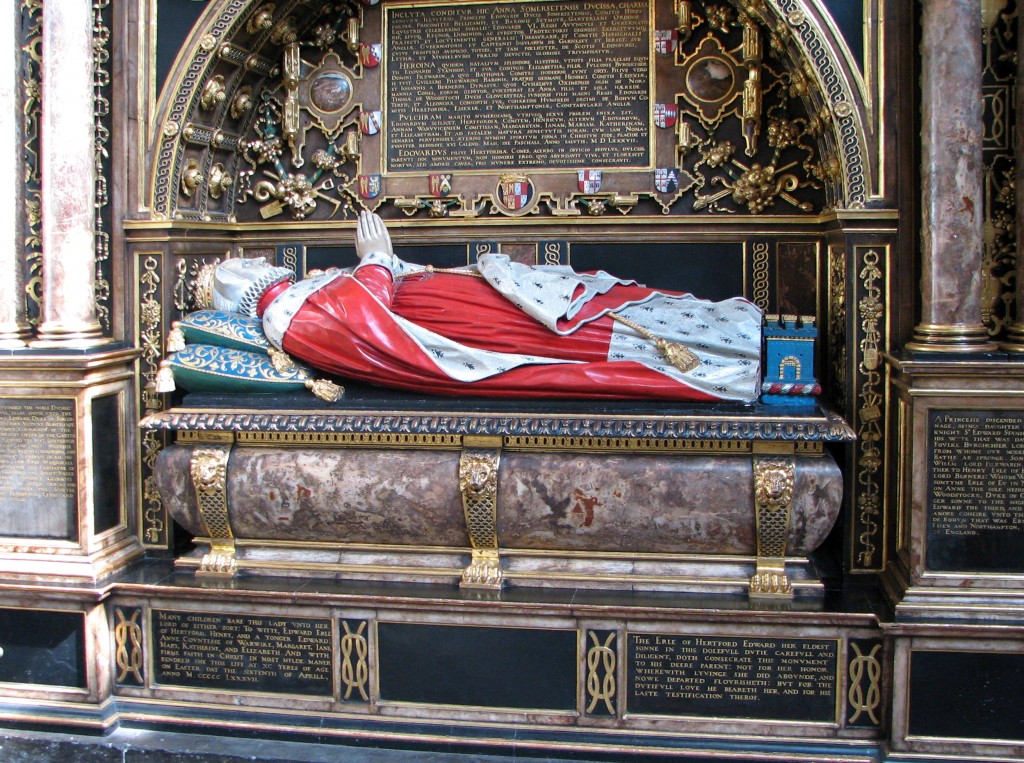 Hi, there! Between taxes and a lovely weekend in Washington, D.C., with the family, I haven’t had much time to blog, but I did want to stop in and commemorate the death of Anne Seymour, Duchess of Somerset. She’s an important character in Her Highness, the Traitor (coming out on June 1!), and I’m seriously considering giving her a novel to herself. What would you think of that?

Anne died at Hanworth in Middlesex on Easter Sunday, April 16, 1587. Her epitaph claims that she was ninety, but her year of birth has been more recently estimated as 1510, which seems more likely given her gynecological history (she bore her last child in 1550, after which her childbearing was interrupted by her husband’s imprisonment in October 1551 and execution in January 1552).

Anne herself had been arrested soon after her husband was seized and remained as a prisoner in the Tower until August 1553, when she was released by Mary I, with whom she had long been friendly. Over the next years, she managed to rebuild her fortunes; Retha Warnicke gives the value of her goods and moveables at her death as £9,829 19s 8d.

At the sompteous and stately funeralls of the last Anne duchesse of Somerset, which were performed by the right honorable Edward earle of Hertford hir executor, anno 1587, there was a portraieture of the same duchesse made in robes of her estate, with a coronicall to a duchesse, and the same representation bore under a canopie; and all the other ceremonyes accomplished; and bycause there was no duchesse to assist thereat, the queen’s majesty gave her royal consent that the countesse of Hartford his wife should have all honour done to her after that estate during the funeral. As by warrant directed to me under her majesty’s hand appears.

The Earl of Hertford, who had married Frances Howard some years after his first marriage to Katherine Grey landed both of the spouses in the Tower, erected a fine tomb to his mother’s memory in the Chapel of St. Nicholas. The English epitaph, which fills four plaques, reads:

The noble Dutchess of Somerset,

Dear Spouse unto the renowned Prince

0f the most famous knightly Order of the Garter,

Uncle to King Edward the Sixth,

Governor of his Royal Person,

And most worthy Protector

Of all his Realms, Dominions, and Subjects.

Lieutenant-General of all his Armies,

Treasurer, and Earl-Marshal of England,

The Isles of Guernsey, and Jersey;

Under whose prosperous Conduct,

Hath been so often, so fortunately

Vanquished at Edinburgh, and Leith,

Daughter to the worthy Knight,

By Elizabeth his Wife, that was Daughter to

Our Modern Earls of Bath are sprung.

That was Brother to Henry, Earl of  Essex,

And William their Sire,

Sometime Earl of Eu, in Normandy.

Begat on Anne, the sole Heir of

Thomas of Woodstock, Duke of Gloucester,

Younger Son, to the mighty Prince

And of his Wife Elinore;

Earl of Hereford, Essex, and Northampton,

This Lady bare many Children, To wit,

Edward Earl of Hertford, Henry, and

And with firm Faith in Christ,

And in most mild Manner,

Render’d she her Life

At Ninety Years of Age,

The Earl of Hertford, Edward her eldest Son,

In this doleful Duty careful and diligent,

Doth consecrate this Monument to his dead Parent;

Not for her Honour wherewith living she did abound,

But for the dutisul Love he beareth her,

And for his last Testisication thereof.

The photograph here shows Anne’s effigy, but the tomb itself is much larger.  A photograph of the entire tomb can be found here.

William Dethick, Garter. “Of the Antiquity of Ceremonies Used at Funeralls.” in Thomas Hearn, ed., Collection of Curious Discourses, Volume I, 1773.

15 thoughts on “The Death of Anne Seymour, Duchess of Somerset”