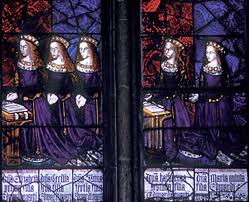 When Edward IV died in April 1483, he was survived by two sons and five daughters. His eldest daughter, Elizabeth, would become Henry VII’s queen, his sons would disappear during Richard III’s reign, his daughters Cecily, Anne, and Katherine would marry, and his youngest daughter, Bridget, would become a nun. But what of the often-forgotten children–three of them–who died before their father?

The first of these children, Mary, was Edward IV and Elizabeth Woodville’s second daughter, who was born at Windsor Castle in August 1467. She was christened on 12 August 1467, a couple months after the famous tournament between Anthony Woodville and the Bastard of Burgundy at Smithfield. Cardinal Bourchier, the Archbishop of Canterbury, was her godfather; her godmothers are not recorded, but perhaps Elizabeth’s younger sister Mary served as one of them, and gave the infant her name. A year later, in October 1468, Edward IV granted the queen an allowance of 400 pounds per year for the expenses of her two daughters, Elizabeth and Mary. Mary’s governess during her early years was Margaret, Lady Berners, who served the princess until Lady Berners’ death in 1475.

Edward IV, preparing for what would be an anticlimatic expedition to France in 1475, drew up his will. Like her sister Elizabeth, Mary was to have a marriage portion of ten thousand marks if she married in accordance with the wishes of her mother and the Prince of Wales. If she disparaged herself, her ten thousand marks would go toward her father’s debts. Edward IV did not intend his daughters to make a runaway match as he had.

Instead of making war on the French king, Louis XI, Edward IV ended up entering into a peace treaty with him. As part of the arrangements, Elizabeth of York was promised to Charles, the Dauphin of France. In the event that Elizabeth died before the marriage took place, Mary was to take her place as the Dauphin’s promised bride.

In July 1476, Edward IV reburied his father, Richard, Duke of York, who had been killed at the Battle of Wakefield on 30 December 1460. The reburial took place at Fotheringhay. Among those making offerings at the requiem mass were “the queen and her two daughters,” presumably her first two daughters, Elizabeth and Mary, who was almost nine at the time.

The next ceremony Mary was called upon in which to participate was probably more to the young girl’s taste than the burial of the grandfather she had never known. In January 1478, Mary’s four-year-old brother Richard, Duke of York, married an older woman, the five-year-old Anne Mowbray. As the little bride entered the chapel, the king, the queen, and their daughters Elizabeth, Mary, and Cecily waited for her under a canopy of cloth of gold.

In 1481, Mary, apparently no longer needed as a stand-in for her older sister’s engagement, was proposed as a bride for Frederick I of Denmark. Sadly, instead of becoming queen of Denmark, Mary died in May 1482 at Greenwich–eleven months before her father.

Mary was buried alongside her little brother George. Her grave was excavated in 1810.

Conceived several months after her father recovered his throne in 1471, poor little Margaret was born at Windsor on 10 April 1472 and died on 11 December 1472. She was buried at Westminster Abbey before St. Edward’s shrine. According to Mary Ann Everett Green, her Latin tomb inscription, translated into English, reads: “Nobility and beauty, grace and tender youth are all hidden here in this chest of death. That thou mayest know the race, name, sex and time of death, the margin of the tomb will manifest all to thee.”

Edward IV named George as his lieutenant of Ireland on 6 July 1478 and appointed Henry, Lord Grey of Codnor as his deputy. Young George never got a look at the emerald isle. In March 1479 he died, probably a victim of the plague or another epidemic disease. Griffiths believes that the boy was staying at Sheen at the time of his death.

George’s half-brother by the queen’s first marriage, Thomas, Marquess of Dorset, attended George’s funeral at Windsor, as did his uncle, Anthony, Earl Rivers; John, Lord Strange, the husband of Elizabeth’s sister Jacquetta; John Blunt, Lord Mountjoy; Richard Hastings, Lord Welles; and Lord Ferrers of Chartley. By custom, Edward IV was not publicly present at his son’s funeral, although it is possible that he observed the proceedings from an enclosed space. He was issued a robe of blue, however, a color worn by Margaret of Anjou and Elizabeth of York when their mothers died.

Mary Anne Everett Green, Lives of the Princesses of England

Cora Scofield, The Life and Reign of Edward the Fourth

Anne Sutton and Livia Visser-Fuchs with R. A. Griffiths, The Royal Funerals at the House of York at Windsor

23 thoughts on “The Children Who Predeceased Edward IV”