Lately, I’ve developed a weakness for cartes de visite—the small photographs that were prized during the last half of the nineteenth century—and have amassed a tiny collection of them, including one of my favorites here of an unidentified lady. 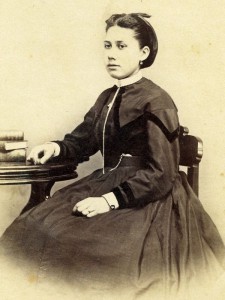 As noted by the American Museum of Photography, cartes de visite (CDVs, as they are commonly abbreviated by collectors) were albumen prints mounted on cards usually measuring  2-1/2″ x 4″. Patented in 1854 by Parisian photographer Andre Adolphe Disderi, CDVs did not become popular in the United States until the end of the decade. Their small size and sturdiness meant that a sitter could buy multiple copies of his or her photograph for a reasonable price–10  to 25 cents apiece– then easily mail them to distant friends and relatives. The American Civil War added to their popularity, as men had their pictures taken before going off to war and in turn carried the portraits of loved ones with them.

Once one began to accumulate CDVs, of course, one had to put them somewhere. Album makers like D. Appleton & Co. hastened to fill this need, informing newspaper readers, “No drawing room table of the day can be considered furnished without its ‘Photographic Album.'”

Not only ordinary people had their photographs taken. Photographic galleries sold CDVs of celebrities–politicians, actors, writers, singers, royalty, generals, and so forth. John Towles wrote, “Everybody keeps a photographic  album, and it is a source of pride and emulation among some people to see how many cartes de visite they can accumulate from their friends and acquaintances. . . . But the public supply of cartes de visite is nothing to the deluge of portraits of public characters which are thrown upon the market, piled up by the bushel in the print stores, offered by the gross at the bookstands, and thrust upon our attention everywhere.” Queen Victoria was both a subject and a collector (“such an amusement–such an interest,” she said). Abraham and Mary Lincoln had their own album, bound in fine leather, although Mary lost her enthusiasm for the pastime after the Lincolns’ son Willie died in 1862. 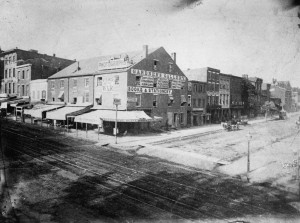 Ubiquitous as CDVs were, it’s not a surprise that they even figured into the Lincoln assassination. The assassin himself, the popular actor John Wilkes Booth, had CDVs of five  ladies on his person when he was trapped in a barn and fatally shot in Virginia: Lucy Hale, his secret fiancée, and four actresses, Alice Grey, Effie Germon, Helen Western, and Fannie Brown.  (As Lucy was the daughter of a New Hampshire senator, her link to the assassin was kept from the public.) The five CDVs (including Lucy’s, shown below) can be seen at the Ford’s Theatre museum in Washington. 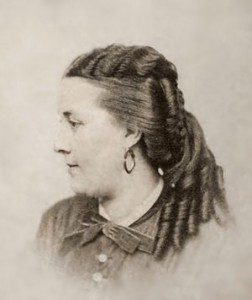 Booth’s celebrity as an actor and his striking looks, of course, meant that his own CDV was much in demand long before he committed the crime of the century.  Among the many admiring  ladies who bought his picture were Anna Surratt, whose mother, Mary, kept a Washington, D.C., boardinghouse  frequented by Booth, and Nora Fitzpatrick, a twenty-year-old boarder. One day in the spring of 1865, Nora, who had had her photograph taken, went with Anna Surratt to pick up the finished product. Seeing CDVs for sale of their exciting new acquaintance, Booth,  each lady purchased one. 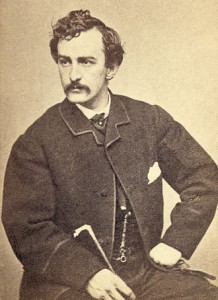 After the assassination, when suspicion fell upon the occupants of the boardinghouse, Mary Surratt, Anna Surratt, Nora Fitzpatrick, and Mary’s visiting niece were arrested and the boardinghouse searched. Detectives found Nora’s CDV of Booth concealed between two others in her album, while another detective, lifting a popular print entitled “Morning, Noon, and Night” off a mantelpiece, found that someone had punched a hole through the back of the frame and concealed Anna’s CDV of Booth inside. The searchers also found a number of CDVs of Confederate leaders and generals, which cast further doubt as to the loyalties of the inmates of the boardinghouse. As it turned out, the CDVs belonged to Anna, who when testifying for her mother’s defense during the conspiracy trial was questioned about her collection:

Q.          [Exhibiting to the witness the picture of “Morning, Noon and Night,” already in evidence.] Do you recognize that picture as ever having belonged to you?

A.           I went one day with Miss Honora Fitzpatrick to a daguerrean gallery to get her picture (she had had it taken previously), and we saw some of Mr. Booth’s there; and having met him before, and being acquainted with him, we got two of the pictures and took them home. When my brother saw them, he told me to tear them up and throw them in the fire; and that, if I did not, he would take them from me; and I hid them.

Q.          Did you own any photographs or lithographs of the leaders of the Rebellion—Davis, Stephens, and others?

Anna’s eclectic taste in CDVs, sadly for her, did nothing to save her mother from the gallows.

Prior to their trial, six of the eight suspects–George Atzerodt, Lewis Powell (known during the trial by his alias of Lewis Payne), Samuel Arnold, David Herold, Michael O’Laughlin, and Edman Spangler–were photographed by Alexander Gardner while they were being held prisoner. Soon Gardner was doing a brisk business in selling CDVs of the gloomy or sullen-looking men, such as the one of Lewis “Payne” shown below. Fake CDVs also circulated, like that of Mary Surratt, who had not had her picture taken by Gardner and who kept her face concealed by a veil during her trial. 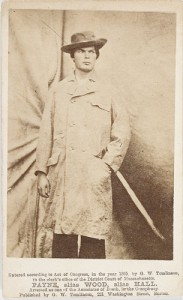 As for Booth, the public’s horror at his crime did nothing to reduce the demand for his CDV, to the disgust of the government, which banned its sales on May 2, 1865, but rescinded the order on May 26, 1865. Meanwhile, Boston Corbett, the sergeant who had fatally shot Booth in Virginia, soon found his own image for sale, although the fanatically religious Corbett, who had taken the extreme measure of castrating himself to avoid going sexually astray, was an unlikely celebrity. 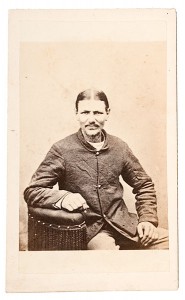 Naturally, some of these cartes de visite play a role in my forthcoming novel, Hanging Mary. Look for it next year!

Dorothy Meserve Kunhartdt and Philip B. Kunhardt, Jr., Matthew Brady and His World.

Benjamin Perley Poore, ed., The Conspiracy Trial for the Murder of the President and the Attempt to Overthrow the Government by the Assassination of Its Principal Officers.

6 thoughts on “The Carte de Visite and the Lincoln Assassination”