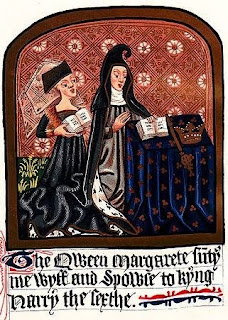 A comment on Margaret’s Facebook page (thanks, Marilyn!) reminded me that I’ve never posted in detail about Margaret’s captivity following her defeat at Tewkesbury. So now I’m going to remedy this situation.

Edward IV left Tewkesbury on May 7, 1471, heading toward Worcester. On his way, he was told that Margaret had been found not far from there in a “poor religious place,” the identity of which is unknown, and would be at his commandment. Some authors, including Paul Murray Kendall and Clements Markham, claim that William Stanley captured Margaret, but they give no source for this information, and I have yet to find a primary source that mentions Stanley in connection with Margaret’s seizure.

Taken with Margaret were her daughter-in-law, Anne Neville, the Countess of Devon, and Katherine Vaux. Anne, of course, had been widowed at Tewkesbury, as had Katherine Vaux, whose husband William had fought and died for Margaret. The Countess of Devon was Marie, a bastard daughter of Charles, Count of Maine and thus a kinswoman of Margaret. Her husband, Thomas Courtenay, the Earl of Devon, had been executed after the battle of Towton; his brother John died at Tewkesbury. Ironically, the women were brought to Edward IV at Coventry, where Henry VI’s and Margaret’s court had been centered during the late 1450’s. It is not known whether the captives had first been taken to Tewkesbury to see their Lancastrian dead.

Edward’s army and the captives returned to London, where on May 21, 1471, they made a triumphant procession into the city, Margaret displayed in a chariot as a trophy of war. Probably Anne Neville was not with her at this point; as her sister Isabel was married to Edward IV’s brother the Duke of Clarence, Anne most likely had been sent to join her sister. Margaret was brought as a prisoner to the Tower, where her husband, Henry VI, also was a captive. That very night, Henry VI died. The official account claimed that Henry VI died of “pure displeasure and melancholy,” but few believed it, then or now. Whether Margaret was allowed to view her husband’s body before it was taken away for burial is unknown.

Now bereft of both her husband and of her only son, Margaret began what would prove to be four and a half years of captivity. According to records cited by Cora Scofield, Katherine Vaux remained with her, and two other women, Petronilla and Mary, waited on her. The ladies were not held for long in the Tower, for on January 8, 1472, John Paston reported to Mary Paston that Margaret had been removed from Windsor to Wallingford near Ewelme, the residence of Alice de la Pole, Duchess of Suffolk. Alice was the widow of William de la Pole, who had negotiated Margaret’s marriage to Henry VI and who been appointed by the king to bring his bride to England. Wallingford Castle was under the constableship of Alice’s son, John, who was married to Edward IV’s sister Elizabeth, and Margaret may have been given into the charge of Alice.

Cora Scofield has suggested that after January 1472, Margaret alternated between strongholds, sometimes in captivity at Wallingford, sometimes in captivity at the Tower. J. L. Laynesmith notes that payments to John, Lord Dudley, for Margaret’s “diets” exist for 1473 and 1474; Dudley was constable of the Tower, but held other offices as well. Laynesmith suggests that Margaret might have returned to the Tower in 1473, or perhaps was lodged someplace else in London under Dudley’s supervision. Sometime during this period, at the crown’s expense, a tailor provided Margaret with seven yards of a woolen cloth known as “puke,” while another person was paid for supplying Margaret six yards of black velvet for “frontlets, tippets, and other necessaries.”

Two records for 1475, Margaret’s last year of captivity, are of interest. Sometime in 1475, Margaret joined the London Skinners’ Fraternity of the Assumption of the Virgin: her membership is commemorated by a miniature (shown above) in the fraternity’s records. Katherine Vaux, Margaret’s faithful lady-in-waiting, also joined the fraternity that year and may be depicted alongside Margaret in the miniature. It may well be, then, that Margaret was residing in London at this time, and that her imprisonment was not rigorous. She certainly had the ability to petition for a papal dispensation, for on November 18, 1475, she was granted one. As transcribed by Peter D. Clarke, it reads as follows:

Margaret, formerly queen of England but now held captive in the hands of her enemies, [informs the pope] that since she is of a delicate and weak constitution and she inhabits a cold region where olive oil does not grow and eating other oil is harmful and abhorrent to her, she doubts whether she and even her household and other persons who sometimes happen to eat with her and may do so in the future can properly [nourish] their bodies and not endanger their persons without eating butter, eggs, and other dairy products. She requests that the pope grant to her and her current household and other person who happen to eat at her table that they may eat butter, eggs, and other dairy products on Lenten and other fasting days or that he leaves such food to their consciences. [approved under a special papal mandate by Antonio Parentucelli, bishop of Luni-Sarzana, regent of the penitentiary, and agreed by him that it be left to their consciences]

By the time Margaret’s dispensation was issued, her captivity was drawing near its end. Earlier in 1475, Edward IV and the French king, Louis XI, had entered into the Treaty of Picquigny; in the negotiations that followed, Louis XI agreed to ransom Margaret for 50,000 crowns (10,000 pounds). Louis’s motives were by no means altruistic; he would ultimately require Margaret to renounce all of her rights to her parents’ lands in Lorraine, Anjou, Bar, and Provence. Margaret, who died in 1482, would spend her last years in France as Louis’s pensioner.

On November 13, 1475, Edward IV authorized Thomas Thwaytes, who had been given custody of Margaret (probably pending the negotiations about her ransom), to deliver her to Thomas Montgomery, who in turn was to conduct her to King Louis in France. Scofield reports that Margaret was soon afterward taken to Sandwich and thence to France. She left behind the graves of those whose rights she had struggled for so long to protect: her husband, then buried at Chertsey Abbey (he was later moved to Windsor), and her son, buried at Tewkesbury Abbey.

On January 22, 1476, at Rouen, Margaret renounced all of the rights she might have in England and was formally handed over to French officials, thereby severing her ties with England. Nearly thirty-one years before, she had entered Rouen in grand state as England’s new queen.

Keith Dockray, ed. Henry VI, Margaret of Anjou and the Wars of the Roses: A Source Book. Gloucestershire: Sutton Publishing, 2000.

5 thoughts on “The Captivity of Margaret of Anjou”