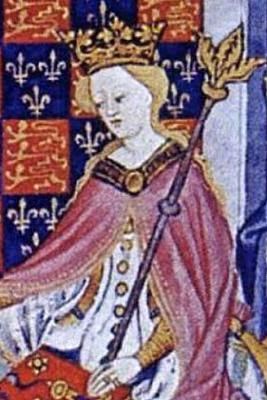 Though contemporaries had a great deal to say about Margaret of Anjou, complimentary and otherwise, scarcely anyone troubled to write about such a mundane detail as her personal appearance. The most detailed description is a secondhand one, which appears in a letter from Raffaelo De Negra to Bianca Maria Visconti, Duchess of Milan, dated October 24, 1458: “The Englishman told me that the queen is a most handsome woman, though somewhat dark and not so beautiful as your Serenity.”

Flattery aside, what exactly does “somewhat dark” mean? Did it mean that Margaret was a brunette? Did it mean that she was a dark blonde? Did it refer merely to her complexion in general? For the record, I know next to nothing about the Duchess of Milan, but it appears from her portraits that she had very fair hair and a very light complexion, so compared to her, many if not most women might have looked “somewhat dark.”

Despite this one description of Margaret as “somewhat dark” the contemporary illustrations of her that show her hair color depict her as a blonde. The most famous is the one shown at the beginning of this post, from the manuscript presented to Margaret upon her marriage by John Talbot, Earl of Shrewsbury. (It depicts Henry VI as having dark hair, which seems to be the way he’s depicted in all of his portraits.)

A less well known portrait of Margaret is from Margaret’s prayer roll, which is kept at the Bodleian Library as Jesus College Oxford MS 124. A black-and-white reproduction of Margaret’s portrait, from which the image below is taken, was reprinted in 1851 in The Archaeological Journal: 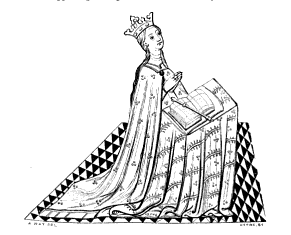 I haven’t been able to find a book that reproduces the illustration in color. According to The Archaelogical Journal, Margaret’s hair in the prayer roll is auburn; according to Joanna Laynesmith in The Last Medieval Queens, it’s blond. The color of the hair in the illustrations may not be indicative of how the real Margaret looked, in any case, for as Laynesmith notes, it was conventional to depict queens with blond hair.

With the less than helpful description of Margaret as being “somewhat dark” and the manuscript illustrations that may owe more to convention than to reality, it’s anyone’s guess what Margaret looked like. I chose to depict her in my own novel as a blonde, on the theory that the Earl of Shrewsbury when having his manuscript illustrated for presentation would have chosen to have Margaret depicted reasonably close to her appearance in reality. At least I do feel safe portraying Margaret as an attractive woman, for as Margaret Kekewich in her book about Rene of Anjou notes, no one in England ever complained about Margaret’s appearance.

Edit: I should have added that there is a medal of Margaret of Anjou by Pietro da Milano, which was made in 1463-1464 during Margaret’s exile in France. This (taken from L. Forrer, A Biographical Dictionary of Medallists, vol. 4, 1909) may well be the most authentic image of Margaret–but it doesn’t answer the all-important question of hair color or complexion. It does, however, show that Margaret, who was then in her early thirties, was an attractive woman. 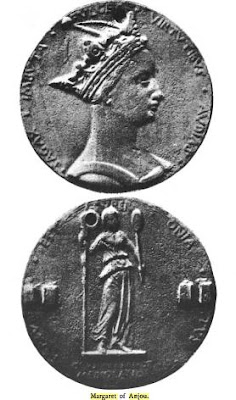 5 thoughts on “So What Did Margaret of Anjou Look Like?”