I’m delighted to be hosting Tony Riches, author of Jasper: Book Two of the Tudor Trilogy, a novel about one of my favorite people, Jasper Tudor! Over to Tony:

Wales had become a dangerous place for the Tudors by 1471 – and the second book in the Tudor trilogy begins with a disaster for the hero, Sir Jasper Tudor, Earl of Pembroke. Forced to flee the massacre of his Welsh army at the Battle of Mortimer’s Cross, his only hope is to organise a rebellion to return his half-brother King Henry to the throne.

Their Lancastrian cause was lost with the news that King Henry VI had been found dead in his chapel in the Tower of London. The Lancastrian heir to the throne, Edward, Prince of Wales, was slaughtered in the massacre of Queen Margaret’s forces at Tewkesbury and many Lancastrian nobles were executed by York’s army. Finding themselves besieged in Pembroke Castle, Jasper Tudor and his young nephew Henry realise their only hope is to somehow escape to France.

As part of the research for this book I decided to follow the Tudor’s journey from Wales to their fourteen year exile in Brittany – and ultimately their return to victory at the pivotal Battle of Bosworth. There are many stories but the documented historical record raises questions and I wanted to see for myself what primary evidence I could discover. I live close to Pembroke Castle and the seaside town of Tenby, so it was relatively easy to research their movements in Wales.

Tenby, the nearest town where they could hope to find a ship, was full of danger, as it had been taken by the supporters of King Edward IV. The story handed down over the centuries is that Jasper and Henry Tudor hid in a cellar belonging to a wine merchant named Thomas White, then escaped to the harbour at night through a secret tunnel. It was easy enough to find the location of Thomas White’s house in Tenby, as there is a plaque on the wall outside what is now Boots the Chemists in Tenby High Street. Under a Tudor rose the plaque reads: By tradition Henry Tudor with his uncle Jasper Tudor Earl of Pembroke was hidden in the cellar on this site before escaping to Brittany in 1471. In 1485 he landed at Dale and defeated Richard III at Bosworth to take the throne as the first Tudor monarch. 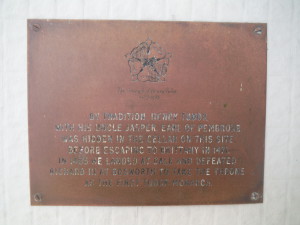 The manager of Boots agreed to show me the tunnels and we started in the extensive basement cellars, now used as store-rooms. As we entered the tunnels, deep under the street, we were plunged into darkness and had to rely on torches. I saw the remains of an ancient fireplace, complete with chimney, an odd luxury to have in a tunnel, which could be evidence for its use in the past to hide people who might need a fire for warmth. The tunnel had several exits which were bricked up but although it wasn’t possible to follow the trail to the harbour, I could see the stories of how the Tudor’s escaped from Tenby could be true. 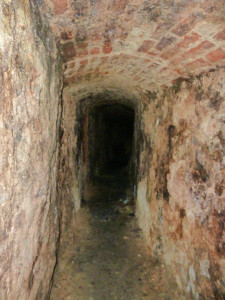 I have sailed from Tenby harbour many times, including in complete darkness to catch the tide, just as the Tudors would have done. There are perilous rocks just below the surface as you head out into the Bristol Channel bound for the equally hazardous Land’s End, which their ship had to navigate before they could even begin heading for the uncertain welcome they might receive in Brittany.
There is a great sense of freedom as you leave the confines of the little town with its narrow streets and pass the monastic island of Caldey before heading out into open water. I can imagine Jasper and Henry Tudor would have stood at the ship’s rail and felt relieved to escape – but also sad to be leaving their troubled country as refugees, with only what they could carry and no idea of when, if ever, they would be able to return.

My own journey began in the old Breton port of Vannes, where I visited the Château de l’Hermine, the residence of Duke Francis of Brittany, where the Tudors requested his protection. Duke Francis appreciated the political value of the exiled Tudors to King Edward IV, as well as to King Louis of France, to whom they were related through the Valois family of Jasper’s mother, Henry’s grandmother, Queen Catherine. 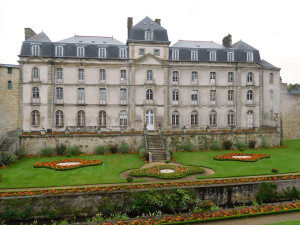 It seems the duke was soon visited by York’s envoys who tried, unsuccessfully, to negotiate their return. Encouraged by King Louis, Duke Francis promised to ensure their safety as his guests while they remained ‘within his dominion’. Although they effectively became his prisoners, it is said Duke Francis treated the Tudors as his own brothers, with ‘honour, courtesy and favour.’

I knew little of the grand fourteenth century palace remains, as the Hotel Lagorce was built on the site in 1785. In my research I managed to track down a contemporary illustration of the marriage of Duke Francis to his first wife and cousin, Marguerite of Brittany in the Château de l’Hermine in November 1455, which gives an impression of the interior when the Tudors were in residence. Although there was little point in entering the present-day château, it was interesting to explore the ancient medieval walls and the narrow maze of streets, as well as the magnificent Gothic cathedral of St. Pierre.

By October, 1472, Duke Francis became concerned they might be abducted by York’s agents and moved the Tudors to his remote ‘hunting lodge’ by the sea, south of Vannes, the Château de Suscinio. Their new home had been fortified in the fourteenth century and now resembled a castle of grand proportions, surrounded by forests stocked with game.

I visited the Château de Suscinio on a gloriously hot afternoon and was surprised to find the car park full of coaches and soon discovered why. The Département of Morbihan has spent a fortune over the last fifty years restoring the once ruined castle to how it might have looked when Jasper and Henry stayed there in the fifteenth century. 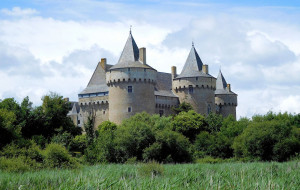 There are no records of where in the château Henry and Jasper were accommodated but one candidate is the first floor, which was used by the captain of the guard, as the second floor contained the duke’s private apartments and third floor those of the duchess. Another intriguing possibility is the West range, on the opposite side of the spacious walled courtyard. I couldn’t explore the rooms in this building as it is still being restored, although the extensive accommodation was claimed to have once been used as a prison, which seems unusual for a château used as a hunting lodge. If the Tudors had been housed there, the men guarding them would have been likely to think of them as ‘prisoners’.

After less than two years at Suscinio Duke Francis decided to reduce the risk of their abduction to England by moving them to different locations inland. Young Henry Tudor found himself deep in the forest at the remote Forteresse de Largoët, outside of the Breton town of Elven. In the safe custody of the twenty-seven year old Marshall of Brittany, Jean IV, Lord of Rieux and Rochefort, Henry was able to continue his education but was prevented from communicating with his mother in England or with his uncle, Jasper Tudor.

The poorly signposted Forteresse de Largoët was a little difficult to find up an unlikely looking track leading deep into the woodlands outside Elven. At the small gatehouse I was given a useful leaflet in English which confirmed that: ‘On the second floor of the Dungeon Tower and to the left is found a small vaulted room where the Count of Richemont was imprisoned for 18 months (1474-1475).’
I was impressed by the scale of the building, which sits in a wooded valley by a small lake. It was built unusually high, at fifty-seven meters, to provide a view out to the Gulf of Morbihan. The tower originally had a moat crossed by a raising drawbridge on a pier and still has a spiral stone staircase with 177 steps to the top. There are deep cracks in the crumbling walls and notices warning of falling masonry and that visitors climb the stairs at their own risk and will ‘arrive at numerous gaping openings which makes this a dangerous venture.’ 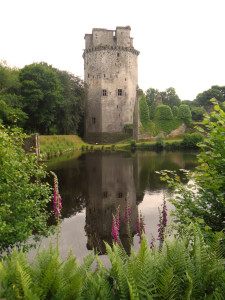 Entering the tower through a dark corridor, the open interior reveals there were once at least seven floors. This space was once used as a kitchen and leads to the main stairway and a guardroom. I regretted not bringing a torch, as the high stairway is lit only by the small window openings. Interestingly, the lower level is octagonal, with the second hexagonal and the rest square. Worryingly, the leaflet notes that ‘This imposing ruin has defied the centuries, in spite of an absence of relieving arches above the large windows. This is what produced the large crevices.’ Cautiously feeling my way up the staircase I had a real awareness that I was now most certainly walking in the footsteps of the young Henry Tudor, who would also have steadied himself by placing his hand against the cold stone walls, nearly five and a half centuries before.

Jasper Tudor had been moved to the impressive château at Josselin, which is still home to the de Rohan family. I was able to have a guided tour of the château and could see how Jasper would have found it frustrating to be so close to his young nephew but unable to see him or even write a letter. From his high window he would have had views across the countryside and probably the ancient bridge over the river (which survived until WW2). When Duke Francis heard of King Edward IV’s untimely death and the rise of Richard III he decided to reunite the Tudors and support Jasper’s daring plan to mount an invasion of England with a mercenary army. 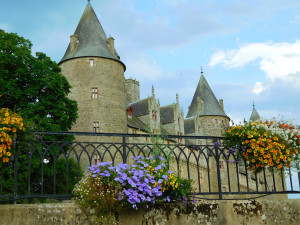 This first attempt was almost a disaster, and they were lucky not to be captured by Richard’s supporters. They limped back to Brittany but learnt from the experience and returned to Mill Bay in Pembrokeshire to march to confront Richard’s army, gathering support on the way. It was an impossibly ambitious idea but Henry’s mother, Margaret Beaufort had convinced them they could win – with the support of her husband, Lord Stanley.

The two armies met at Bosworth Field on the 22nd of August 1485 and the Tudor’s unlikely victory changed the history of Britain. My own journey ends in Bosworth at the anniversary event, where I will raise a glass to the memory of a daring man who risked everything to make his twenty-seven year old nephew king – Jasper Tudor, the true ‘Kingmaker.’ 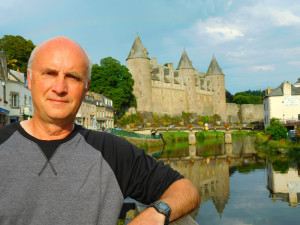 Tony Riches lives with his wife in Pembrokeshire, West Wales and is a specialist in the history of the fifteenth century, with a particular interest in the Wars of the Roses and the lives of the early Tudors. For more information about Tony’s books please visit his popular blog, The Writing Desk and his WordPress website and find him on Facebook and Twitter @tonyriches.

JASPER on Amazon US http://www.amazon.com/gp/product/B01D6KSLJ2

1 thought on “Researching Jasper: A Guest Post by Tony Riches”