With all the things going on the world today and these past few weeks, it’s occurred to me at times that this blog is a bit insular–rather like that Dorothy Parker short story “From the Diary of a New York Lady: During Days of Horror, Despair, and World Change,” but without all the cocktails. However, I decided when I started this blog to leave politics to the political bloggers, and God knows there’s enough of them without me putting my bit in.

So good job, UK, in catching those terrorists, and now back to historical fiction. (And at least one can still carry books on airplanes.)

Having enjoyed The Seventh Son, I toted Reay Tannahill’s Fatal Majesty to the beach with me this weekend. It’s about Mary, Queen of Scots, and I liked it even better than The Seventh Son. It’s written in a similar style, with a very dry, sardonic tone to the narration.

Fatal Majesty switches back and forth between the English court and the Scottish court, and has a very wide cast of characters–wide enough, in fact, to be rather confusing for someone who isn’t intimately familiar with the main players of the time. Most of the characters act entirely in their own self-interest, like so many spiders spinning their webs, and it is the convergence of these webs that eventually engulfs and destroys Mary.

Though Tannahill is sympathetic toward Mary, one gets a sense of distance, especially in the latter half of the novel. Indeed, Tannahill’s favorite character seems to be Mary’s Secretary of State, Lethington, which gives rise to what I thought was the novel’s major flaw: once Lethington makes his final exit, Tannahill becomes far less engaged with her material, making the last fifty pages a bit of chore to get through. Tannahill covers thirty years in those fifty pages, and although there’s a lot of intrigue packed in those years and pages, I found myself skimming. Worse, Mary herself appears only occasionally in them. That may have been to drive home the point that she was little more than the pawn of others during that time, but I would have liked to have seen more of Mary nonetheless. Still, this is a 450-plus-page novel, and the pleasure of reading the first 400 pages, packed full of excellent characterizations and dry wit, more than makes up for the relative weakness of the last fifty pages.

Below: Onslow, the King of the End Table 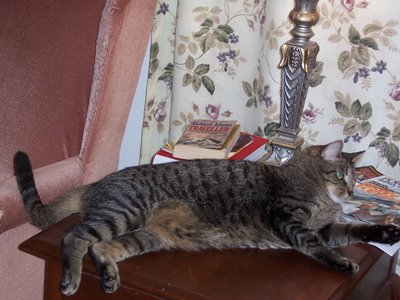 2 thoughts on “Reay Tannahill Redux , and a Nod Toward the News”