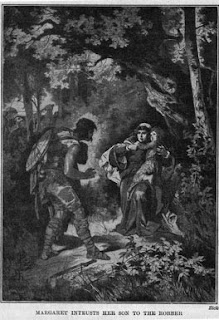 One story that’s common to almost all chronicle accounts of Margaret of Anjou is one where Margaret encounters robbers and narrowly escapes. But when and where Margaret was robbed is a matter of some confusion, which this post will do nothing to clear up.

The first reported encounter dates to 1460, after the battle of Northampton. The English Chronicle reports that when she and her son were fleeing to Wales, Margaret was robbed of ten thousand marks. William of Worcester claims that she was robbed by one John Cleger, a servant of Lord Stanley, but escaped while Cleger and his men were going through her possessions. while Gregory’s chronicle claims that Margaret was robbed by one of her own servants:

Ande thenn the quene hyrynge thys she voydyde unto Walys, but she was met with be-syde the Castelle of Malepas, and a servand of hyr owne that she hadde made bothe yeman and gentylman, and aftyr a-poyntyd for to be in offysce with hyr sone the prynce, spoylyde hyr and robbyde hyr, and put hyr soo in dowt of hyr lyffe and sonys lyffe also. And thenn she com to the Castelle of Hardelowe in Walys, and she hadde many grete gyftys and gretely comfortyd, for she hadde nede there of, for she hadde a fulle esy many a-boute hyr, the nombyr of iiij personnys. And moste comynly she rode by-hynde a yonge poore gentylle-man of xiiij yere age, hys name was Jon Combe, i-borne at Amysbery in Wyltschyre. And there hens she remevyd fulle prevely unto the Lorde Jesper, Lorde and Erle of Penbroke, for she durste not a byde in noo place that [was] opyn but in pryvatt. The cause was that conterfete tokyns were sende unto hyr as thoughe that they hadde come from hyr moste dradde lorde the Kyng Harry the VI.; but hyt was not of hys sendyng, nothyr of [his] doynge, but forgyd thyngys, for they that brought the tokyns were of the kyngys howse, and sum of [t]epryncys howse, and sum of hyr owne howse, and bade hyr beware of the tokyns, that she gave noo credans there too; for at the kyngys departynge fro Covyntre towarde the fylde of Northehampton, he kyste hyr and blessyd the prynce, and commaundyd hyr that she shulde not com unto hym tylle that [he] sende a specyalle tokyn unto hyr that no man knewe but the kynge and she. For the lordys wolde fayne hadde hyr unto Lundon, for they knewe welle that alle the workyngys that were done growe by hyr, for she was more wyttyer then the kynge, and that apperythe by hys dedys, &c.

[The part about Henry VI kissing Margaret and blessing the prince before departing from Coventry is rather sweet, isn’t it? And it would be fun if the 14-year-old Jon Combe was an ancestor of my husband, whose surname is quite similar. But I digress.]

According to another story, which is recounted by Georges Chastellain and French sources, Margaret once more fell into the hands of robbers before escaping abroad, where she regaled the Duchess of Bourbon and other ladies with tales of her ordeal. None of the contemporary sources, however, tell the story quite as splendidly as the Victorian writer Agnes Strickland in her Lives of the Queens of England:

While Margaret was engaged in these agonizing supplications, some of the ruffians began to quarrel about the division of the rich booty of which they had despoiled her. From angry words, they fell to furious fighting one with another; a dreadful slaughter ensued, which proved a providential diversion in favour of the royal prisoners, for the men who had been preparing to put the queen to a cruel death, ran to take part in the conflict in order to secure their share of the plunder, and paid no further heed to her or her son. Margaret took advantage of their attention being thus withdrawn to address herself to a squire, who was the only person remaining near her, and conjured him, “by the passion of our Lord and Saviour Jesus Christ, to have pity on her, and do what he could to assist her to make her escape.” This squire, whose heart God had touched with compassion for her distress, and who was luckily provided with a horse, which was able and willing to carry, not only double, but threefold, responded to her appeal in these encouraging words: “Madame, mount behind me, and you, my lord prince, before; and I will save you, or perish in the attempt.” Margaret and her boy promptly complied with this direction, and made off unpursued, the ruffians being too much occupied in rending each other, like savage beasts over their prey, to observe the escape of their prisoners. . . .

While she was lamenting over the calamitous events of that disastrous day, she suddenly perceived, by the light of the rising moon, an armed man of gigantic stature and stern aspect advancing towards her with threatening gestures. At first she imagined tnat he belonged to the baud of pitiless ruffians from whom she had fled, but a second glance at his dress and equipments convinced her that he must be one of the forest outlaws, of whose remorseless cruelty to travellers she had heard many frightful instances. Her courage rose with the greatness of the danger, and perceiving that there was no possibility of escape except through God’s mercy, maternal love impelled her to make an effort for the preservation of her son, and she called the robber to her. There is something in the tone and manner of those whose vocation is command which, generally speaking, ensures the involuntary respect of attention. The robber drew near, and listened to what Margaret had to say. The popular version of the story is, that she took the little prince by the hand, and presented him to the outlaw with these words: “Here, my friend, save the son of your king.” But if Margaret’s own account of this memorable passage of her life is to be credited, she was not quite so abrupt in making a communication attended with such imminent danger to her son, nor before she had in some degree felt her way by an eloquent and impassioned appeal to the compassion of the unknown outlaw, who came not in a guise to invite a precipitate confidence. She commenced the parley by telling him, that if he were in quest of booty, she and her little son had already been rifled by others of all they possessed, showing him that they had been despoiled even of their upper garments, and had nothing now to lose but their lives; yet, although she supposed he was accustomed to shed the blood of travellers, she was sure he would have pity on her, when she told him who she was. Then bending her eyes upon him, she pathetically added, “It is the unfortunate queen of England, thy princess, who hath fallen into thine hands in her desolation and distress. And if,” continued she, “O man! thou hast any knowledge of God, I beseech thee, for the sake of His passion who for our salvation took our nature on him, to have compassion on my misery. But if you slay me, spare at least my little one, for he is the only son of thy king, and, if it please God, the true heir of this realm. Save him, then, I pray thee, and make thine arms his sanctuary. He is thy future king, and it will be a glorious deed to preserve him,—one that shall efface the memory of all thy crimes, and witness for thee when thou shalt stand hereafter before Almighty God. Oh, man ! win God’s grace to-day by succouring an afflicted mother, and giving life to the dead.” Then perceiving that the robber was moved by her tears and earnest supplications, she put the young prince into his arms with these words: “I charge thee to preserve from the violence of others that innocent royal blood, which I do consign to thy care. Take him, and conceal him from those who seek his life. Give him a refuge m thine obscure hiding-place, and he will one day give thee free access to his royal chamber and make thee one of his barons, if by thy means he is happdy preserved to enjoy the splendour of the crown, which doth of right pertain to him as his inheritance.”

The outlaw, whose heart, to use the impressive words of the royal heroine of this strange romance of history, “the Holy Ghost had softened,” when he understood that the afflicted lady who addressed these moving words to him was indeed the queen of the land, threw himself at her feet and wept with her; declaring, withal, “that he would die a thousand deaths, and endure all the tortures that could be inflicted on him, rather than abandon, much less betray, the noble child.”

Reconciling all of these various accounts, and untangling the contemporary accounts from later embellishments, has posed quite a bit of difficulty for historians. Cora Scofield, Edward IV’s biographer, decided that there were likely two robberies, one in 1460 and 1463, while Charles Spencer Perceval, who studied the various accounts in 1881, speculated that the English accounts were the source of the later Burgundian and French accounts and that it was probable that there was only one incident, that after the battle of Northampton. To confuse matters more, there is a local tradition in Hexham that Margaret and her robber ally hid out in “The Queen’s Cave” there following the battle of Hexham; the battle, however, was fought in 1464, long after Margaret had made her way to France.

13 thoughts on “Queen Margaret of Anjou and the Robbers”