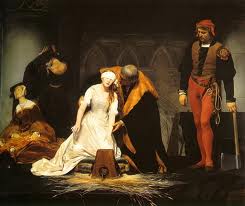 1. Philip of Spain, Queen Mary’s fiancé, insisted upon Lady Jane’s execution before he would marry the queen.

Philip’s supposed insistence upon Jane’s death before he would wed Mary has often been used in novels and in the film Lady Jane to depict Mary as a pathetic, aging hag so desperate for love that she would sacrifice a young girl’s life to keep from losing a prospective husband. Mary’s council did indeed urge the queen to execute Jane, and Simon Renard, the imperial ambassador, was clearly pleased at her decision to do so. But there is no evidence that Philip or his father, the Emperor Charles, demanded Jane’s death as a precondition to marriage or indeed that they even had a chance to do so, given the short period of time between the collapse of Wyatt’s rebellion (the uprising which sparked the decision to execute Jane and Guildford, who had been sentenced to death the previous year) on February 7 and the executions on February 12. Indeed, the decision to execute the couple appears to have been taken before the rebellion had even ended: Renard, writing to the emperor on Thursday, February 8, to report the collapse of the rebellion, believed that Jane and Guildford’s executions had been ordered for the previous Tuesday—February 6—but did not know whether they had been carried out. Renard’s letter to Charles on February 13 mentions Jane’s and Guildford’s deaths the day before almost offhandedly: “Since then it has been discovered that 400 or 500 gentlemen and others had a share in the plot, so the prisons will not suffice to hold them all. Yesterday Courtenay, chief of the conspiracy according to Wyatt, was committed to the Tower, and the Lady Elizabeth set out to come hither. She is expected to-morrow with an escort of 700 or 800 horse, and it is believed that she will soon be sent to the Tower, where Jane of Suffolk was yesterday executed, whilst her husband, Guildford, suffered in public. To-day 30 soldiers, men of some standing, were executed as an example to the people.”

Mary may or may not have been reluctant to execute Jane and Guildford, but she was certainly capable of resisting imperial pressure, as her refusal to execute her sister Elizabeth despite Renard’s urgings shows.

2.  Queen Mary offered to spare Jane’s life if she would convert to Catholicism.

Mary did send a priest, John Feckenham, to persuade Jane to accept the Catholic faith before she died, and gave her a three-day reprieve from execution while he attempted to convert her. Mary’s interest, however, was in saving Jane’s soul, not her life. As Giovanni Commendone, a papal official who was on hand for the events of 1553, related, “Once sentence was passed, it was sent to her a theologian of high repute who should try to persuade her and free her from that superstition in which she had grown up, so that when dying her body, the soul would not be lost.” One can speculate as to what might have happened had Feckenham succeeded in winning Jane’s conversion, of course, but little indicates that Mary, who had executed the Duke of Northumberland the previous August despite his own dramatic conversion to Catholicism, was offering any spiritual plea-bargains. (Incidentally, Jane did allow Feckenham to accompany her to the scaffold, where she took leave of him affectionately and told him “that during those few days she was more bored by him than frightened by the shadow of death.”)

3. Jane refused to write to her mother before her death.

Jane wrote messages to her father and to her sister Katherine before her death, but no message to Frances survives, prompting many to cite this omission on Jane’s part as proof of Frances’s shortcomings as a mother. In fact, Michelangelo Florio, who had served as Jane’s tutor in Italian, stated in Historia de la vita e de la morte … Signora Giovanna Graia that Jane wrote to Frances before her death. It  may simply be that the letter to Frances was lost or destroyed, particularly if it was purely of a personal, and not religious, nature.

On a related note, Jane is said to have written two messages to her father, one of which appears in her prayer book, the other of which is a letter which begins “Father, although it hath pleased God to hasten my death by you, by whom my life should rather have been lengthened . . . “ The prayer book, of course, survives in the British Library, but as Eric Ives in his book on Lady Jane Grey has noted, the original of the letter does not. It first appeared in the 1570 edition of John Foxe’s Book of Martyrs. As Ives points out, the style of the two writings differs considerably: Jane addresses her father, the Duke of Suffolk, in the unquestionably authentic prayer book as “Your grace,” whereas the letter begins abruptly, “Father.” Ives also notes that the letter refers to the duke’s imprisonment (he was brought to the Tower on February 10) and questions why Jane would need to write to her father twice within a short period of time. Thus, there is good reason to doubt the authenticity of the letter.

4. Guildford Dudley wept copiously on his way to the scaffold and at his execution.

Guildford Dudley has been portrayed in both nonfiction and in most historical novels as sniveling his way to the scaffold, his undignified  behavior being contrasted to that of his calm, self-possessed wife. In fact, the one contemporary account of his death indicates that while walking to the scaffold without a priest but surrounded by well-wishers, he conducted himself with quiet dignity. On the scaffold, he simply made a short, unrecorded speech and prayed a great deal, without losing control of his emotions.

The monday, being the xijth of Februarie, about ten of the clocke, ther went out of the Tower to the scaffolde on Tower hill, the lorde Guilforde Dudley, sone to the late duke of Northumberland, husbande to the lady Jane Grey, daughter to the duke of Suffolke, who at his going out tooke by the hande sir Anthony Browne, maister John Throgmorton, and many other gentyllmen, praying them to praie for him; and without the bullwarke Offeley the sheryve receyved him and brought him to the scaffolde, where, after a small declaration, having no gostlye father with him, he kneeled downe and said his praiers; then holding upp his eyes and handes to God many tymes; and at last, after he had desyred the people to pray for him, he laide himselfe along, and his hedd upon the block, which was at one stroke of the axe taken from him.

6. Jane was pregnant when she died.

Thomas Chaloner, writing after Mary I’s death, wrote in an elegy (as translated by Dr. J. Stephan Edwards) that Mary “was not stirred by [Jane’s] youth nor fortitude, nor by nearness of blood, nor (so holy) by pregnancy.” As Edwards notes, there is no other evidence that Jane was pregnant at the time of her death; indeed, since she had not been with Guildford since July 1553, her pregnancy would have been far advanced in February 1554 and is highly unlikely to have escaped notice. (On a related note, the episode in the film Lady Jane where Guildford and Jane enjoy a night of love-making the evening before their deaths is entirely fictitious; indeed, Jane is on record as having declined to have a farewell visit with Guildford on the ground that it would only distress them both.) Something about young women and the Tower seems to have stirred otherwise sensible men to flights of fancy: Renard, reporting on February 17 that Mary’s sister Elizabeth was on her way to the Tower, insisted that the future Virgin Queen was known to be pregnant.