After writing my last post, I thought I would mention some of the various portraits that have been identified as depicting Frances Grey (née Brandon), Duchess of Suffolk. None has been authenticated as a portrait of her, but here’s a look at the various candidates:

The painting below is by far the one most usually associated with Frances. For centuries, it was misidentified as a portrait of her and her second husband, Adrian Stokes. Recent scholarship has identified it as one of Mary Neville and her son, Gregory Fiennes, but centuries of error die hard. As dozens of books, nonfiction and fiction alike, have relied on this painting in depicting Frances’s physical appearance (and even her personality), it’s likely that it will be associated with Frances for years to come. (Incidentally, the myth that Adrian Stokes was half Frances’s age rests largely upon this portrait; Stokes was actually only a couple of years Frances’s junior. Before joining her household he was the marshal of Newhaven in France, where he commanded ten men until the fortress fell to the French in 1549.) 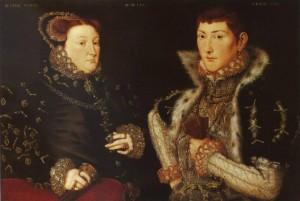 The drawing below by Hans Holbein was labeled “The Marchioness of Dorset” after Holbein’s death in 1543. John Cheke, Edward VI’s tutor, is said to have provided the labels for many of the portraits.  Unfortunately, from 1533 to 1541, there were two Marchionesses of Dorset, Frances and her mother-in-law, Margaret Grey, née Wotton. Art historians have generally identified this portrait as being of Margaret rather than of Frances. Moreover, as Eric Ives has pointed out, the lady is carrying a walking stick, which seems an unlikely implement for Frances, who was only twenty-six at the time of Holbein’s death, to be holding. The walking stick can be seen more clearly in the finished painting: 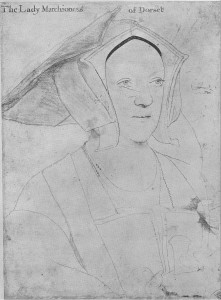 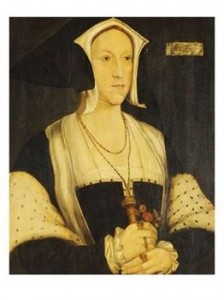 The next Holbein sketch, labeled “The Duchess of Suffolk” is usually identified as being that of Frances’s stepmother, Katherine Brandon, Duchess of Suffolk. As Ives points out,  Frances did not become a duchess until November 1551, so if Cheke made his identifications of the Holbein portraits before then, it would rule Frances out as a possible subject. If he made his identifications after that date, however, it is possible that “Duchess of Suffolk” referred to Frances rather than Katherine. The Holbein can be compared to the miniature of Katherine Brandon shown below it. 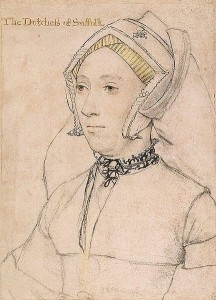 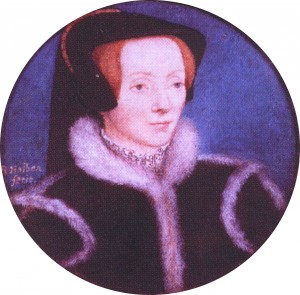 In his study of Frances’s father, Charles Brandon, S. J. Gunn referred to the Holbein sketch below as being one of Frances, her daughters Jane and Katherine, and Charles’s two sons by his marriage to Katherine Brandon. Gunn based his statement on Paul Ganz’s identification of the sketch. As Dr. John Stephan Edwards pointed out when I asked him about the sketch, however, the British Museum dates this piece to 1532-33, before either Frances’s children or the Brandon boys were born. It seems unlikely, then, that Frances is the sitter in this pleasant domestic scene. 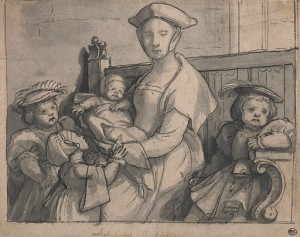 In her biography Bess of Hardwick, Mary Lovell reproduced the portrait below as being one of Frances. This painting, which Lovell credited to the Royal Collection, can be found all over the Internet, identified as Frances, but I have found absolutely nothing about its date, the identity of the artist, or where it is held. Neither Ives nor Leandra de Lisle mentions it as a likeness of Frances. The ruff looks to me like something from the later part of the century (Frances died in 1559). If anyone knows anything about the provenance (there’s just something nice and tweedy about the word “provenance,” isn’t there?) of this painting, please comment! 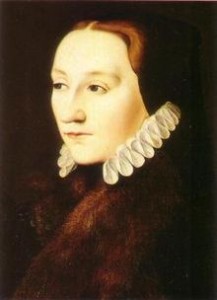 Finally, one undisputed image of Frances does exist: the effigy on her tomb at Westminster Abbey. Adrian Stokes, her widower, obviously hired an excellent craftsman to pay a last tribute to his duchess. 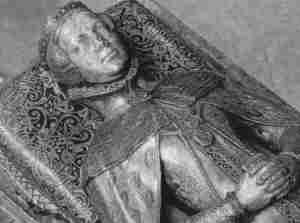