I may be blogging again before the year is out, but just in case I don’t make it and/or you’re too busy to stop by, I wanted to wish all of my blog readers a Merry Christmas and a Happy New Year. Boswell and Dudley are celebrating in style in their Christmas sweaters, as you can see: 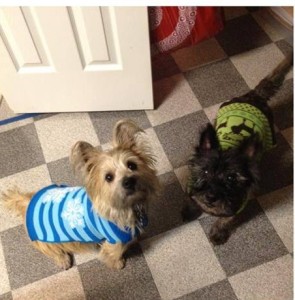 My first nonfiction book, The Woodvilles, is coming out in hardback this January in the United States (it’s already available as an e-book and in printed and electronic form in the United Kingdom).

The historical novel I’m currently working on (working title, The Assassin’s Kiss) is taking me in quite a new direction: it’s set not in medieval or Tudor England, but in 1865 Washington, D.C., and not a single person gets his head chopped off.  On the other hand, one heroine ends up on the gallows, while another ends up in an insane asylum. My clever Facebook friends have guessed one heroine, can you? Look for more posts connected with my work in progress in 2014!

After the New Year, I’ll be offering my readers something that I’ve never done before: the chance to name one of my characters. Not a human character, all of whom have been supplied with names by history, but a feline one. The winner will get an acknowledgment in my novel as well as a signed copy. So be thinking of good 19th-century American cat names!