Merry Christmas, and a Happy New Year! I’ve been busy revising my forthcoming novel, Hanging Mary, for the publisher. Here’s a seasonal excerpt for you, set at Mary Surratt’s boardinghouse 150 years ago on Christmas Eve, 1864:

The men had gone out the previous night, Mr. Weichmann to buy some presents for his sisters and Mr. Surratt to offer him his invaluable advice, as he put it, and had stayed out until past their usual hour. Mr. Surratt yawned as he sat down. “Ma, you didn’t wait up for us last night.”

“Should I have? I trusted that Mr. Weichmann would keep you out of trouble.”

“If you had, I would have told you who I met last night.”

“As I was planning to. But you must guess. Who do you think Weichmann and I met in the street?”

“Mrs. Sprague?” Anna suggested, naming Kate Chase, the recently married daughter of the even more recently appointed Chief Justice of the Supreme Court. One of the most beautiful women in Washington, and now one of the richest, her wedding had been the talk of the town last year.

“No, those dainty slippers would never touch the mud, although I’d much rather meet her on the street than Old Abe any day. You try, Miss Fitzpatrick.”

I shrugged. There were so many important people in Washington one might glimpse. “John Wilkes Booth,” I said idly.

If you had put a young lady from New Orleans, a young lady from Boston, a young lady from Richmond, a young lady from Cleveland, a young lady from Baltimore, and a young lady from Washington together, the one thing they would have agreed upon, before they scratched each other’s eyes out, was that John Wilkes Booth was one of the handsomest men in America. Any woman worthy of her sex, and I was no exception, could rhapsodize for hours upon his curling black hair, his soulful black eyes, his beautiful skin, and his fine physique—even those women who hadn’t actually had the privilege of seeing him in person. I was among the lucky ones, for the previous year, he had played at Ford’s Theatre, and as I had been at school in Georgetown at the time, I had plagued my father until he agreed to take me. As the play had been Richard III, Mr. Booth’s looks had not shone to their best advantage, since he was forced by the role to assume a hunchback and to scowl a great deal. Even so, I had had to repress a smile when Lady Anne informed Richard that he was a foul toad. I had gone to bed that night thoroughly convinced that such a lovely man could not have possibly killed his nephews, although of course the play said that he did.

“Yes. Mr. Weichmann and I were by Odd Fellows Hall when we saw Dr. Mudd from Bryantown. You probably know Dr. Mudd from when you were at school there, Anna.”

“I do, he treated one of my classmates when she fell sick. But what’s Dr. Mudd to me? I want to hear about Mr. Booth.”

“Well, to get to the Booth, you must step through the Mudd. Dr. Mudd hailed us and introduced his companion—who, if you’re clever, you might deduce was Mr. Booth.”

“I thought his name was Mr. Boone at first,” Mr. Weichmann admitted.

“How does he look close up?” I asked.

“I’m not a connoisseur of men’s looks, Miss Fitzpatrick, but I think most would call him very handsome. Perhaps more so in person than onstage, since there’s not the gaslight or the makeup to intrude.”

I gazed raptly into space.

“So what happened next? Did you continue on?”

“Goodness, no, sister! It gets better. Mr. Booth invited the three of us to his rooms at the National Hotel, and we sat and had milk punch—”

“And smoked cigars,” Anna said. “I smell them on you and Mr. Weichmann.”

“Yes, well, we men like our cigars, you know. If you wish to marry you will have to learn to tolerate them, or else die an old maid. Anyway, we drank our milk punch, smoked our fiendish cigars, and talked awhile. Afterward, we went onto Dr. Mudd’s rooms at Pennsylvania House—he came to town to see some relatives—and talked some more. And that is it, except that Mr. Booth has promised to call upon us here sometime.”

“So he said. Mind you, he didn’t say precisely when.”

“We shall have to keep the place spotless at all times, Ma,” Anna said. “Thank goodness the furniture in the parlor is new—I couldn’t bear to see Mr. Booth sitting here in shabby surroundings.”

“He travels a great deal, and must stay in all sorts of places,” I said. “Perhaps he will be willing to make some allowances.”

“Nay, Miss Fitzpatrick, that will not do. We must be in readiness to receive him at any possible moment, and the house must be in a state of nearly palatial splendor.” Mr. Surratt studied his egg thoughtfully. “Perhaps we should not serve any meals here, lest the smell of cooking offend him.”

“Johnny, stop tormenting the young ladies,” Mrs. Surratt said. “This is a perfectly respectable house, and a clean one too, if I must say so myself, and there is no reason Mr. Booth, if he comes, should not be pleased. He will not, of course, be expecting a grand house.”

“Well, I might have added a staircase or two in my description of it, and a bay window. Is it too late to bring a builder over?” 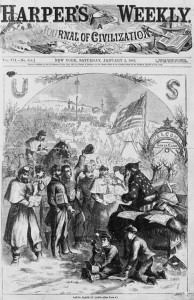 1 thought on “Merry Christmas, and An Excerpt!”