In the fall of 1864, Mary Surratt, a widow from Prince George’s County, Maryland, moved to Washington, D.C. and opened her property at 541 H Street (the light-colored house below) to boarders. Mary’s late husband, John, had acquired the house years before as part of a land deal.

So who were the people Mary chose to fill her house on H Street? We’ll save the transients–those who stayed for only a few days, two of whom shared the gallows with Mary–for another time. Here are the seven lodgers who were in Mary’s house for the long term:

Louis Weichmann. Age twenty-two, Louis Weichmann had gone to school with Mary’s son John, and the men had kept up the friendship they formed there. An aspiring priest, Louis had recently got a job as a clerk in the War Department. Finding his lodgings in a large boardinghouse to be lonely, he eagerly accepted John Surratt’s invitation to share John’s bedroom–indeed, his bed, although such sleeping arrangements were common at the time and did not raise eyebrows as they would today. The two men occupied the back bedroom on the house’s third story. 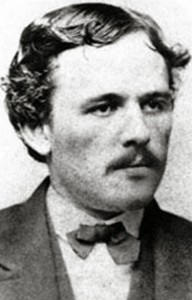 Weichmann’s observations of the goings-on at the Surratt boardinghouse would turn him into a star witness at the conspiracy trial that followed President Lincoln’s assassination. How much he knew of John Surratt’s activities, and how loyal he truly was to the Union, remain hotly debated topics even today.

The events of 1865 ended Weichmann’s aspirations for the priesthood (which may not have been that strong to begin with). He returned to his hometown of Philadelphia, where for many years he held a patronage job with the government until a change of administration cost him his position. His brief marriage to Annie Johnson, a temperance activist, ended in separation. Following the loss of his government job, Weichmann moved to Anderson, Indiana, where some of his siblings were living, and opened a business school. He died in 1902, having left a memoir that was not published until 1975.

Nora Fitzpatrick. Nora, a twenty-year-old fresh out of the convent school of Georgetown Visitation, was a native of Washington, D.C., and the daughter of a widowed bank messenger. As Nora’s father himself was in lodgings, apparently with no suitable quarters for Nora, he placed her with Mary Surratt, probably through a mutual acquaintance. Nora shared a bed with Mary Surratt, who had her bedroom in the back of the house’s second story, and sometimes with Anna Surratt as well, although on the night of the assassination, Anna was sharing an attic room with her visiting cousin.

Along with Anna Surratt, Nora bought a photograph of her exciting new acquaintance, John Wilkes Booth, and kept it in her album, where it would be found by detectives searching the boardinghouse. Along with John Surratt, Lewis Powell, and another boarder, young Mary Apollonia Dean, Nora attended Ford’s Theatre on March 15, 1865, sitting in the same box in which President Lincoln was shot a month later. Booth, who had arranged this visit for Surratt and Powell to familiarize themselves with the layout of the theater in preparation for what was then a kidnapping scheme, stopped by the box.

At the conspiracy trial, Nora testified for both the government and the defense; she reprised her testimony at John Surratt’s trial two years later. She was prominent at Mary Surratt’s reburial in 1869.

In 1870, Nora married Alexander Whelan, a widower with two young daughters, and bore him three sons, but the marriage broke down. So, too, did Nora’s mental health, for in 1885 she was committed by her brother to the Government Hospital for the Insane, now known as St. Elizabeths. Nora died there of tuberculosis in 1896. Her psychiatric diagnosis was “chronic melancholia.” She is buried near her parents in Washington’s Mt. Olivet Cemetery, not very far from Mary Surratt’s grave.

The Holohan family. John T. Holohan, his wife, Eliza (nee Smith) and their children, Mary Catherine and Charles, moved into the boardinghouse in February 1865. The family occupied two rooms in the front of the third story. According to famed assassination researcher James O. Hall, records show that Eliza once accused her husband of assault. A recollection by one of Mary Surratt’s descendants has it that the couple had just reconciled after a separation before they came to live with Mary.

John Holohan worked as a stonecutter, but in 1865 was also involved in procuring substitutes for those wanting to evade service in the Union army. Business was good enough for him to have plenty of greenbacks on hand when John Surratt, heading up to Canada after the fall of Richmond, needed some gold pieces changed. Along with John Surratt, Louis Weichmann, George Atzerodt, and David Herold,  on March 18, 1865, John Holohan attended the play The Apostate, starring John Wilkes Booth, who gave his last performance that evening.

Eliza Holohan was friendly with both Mary and Anna, although she testified that she knew Anna better. On the evening of the assassination, she and Mary set out for Good Friday services at church, but the two women turned back home on account of the dreary weather. Booth once sent a telegram to Louis Weichmann, which Mrs. Holohan delivered to him at his office.

Of all of the boarders, Charles Holohan, who was about eleven, left the most insubstantial mark in the record; he may have been the life and soul of the parlor, for all we know, but none of his activities during his stay with Mary Surratt seems to have been recorded. His older sister, Mary Holohan, who was about thirteen in 1865, is known only for what she did not do: she was invited to go to the theater in March, but declined because she was preparing for her First Communion, leaving Nora to take her place.

After the assassination, John Holohan and Weichmann were required by detectives to help search for John Surratt, a journey that ultimately took them to Canada, but the mission failed. Both Mr. and Mrs. Holohan testified at the conspiracy trial. Although Mrs. Holohan moved in with her mother after the assassination, the Holohans returned to the boardinghouse after Mary Surratt’s hanging, apparently in order to help Anna Surratt. The boardinghouse, however, was soon lost to creditors.

John Holohan, then working as a stone cutter, died of cancer on July 3, 1877. Eliza Holohan succumbed to tuberculosis on March 6, 1899; she was employed as a “sewer of books.” Charles Holohan, who had followed his father into the stone-cutting business, died of pneumonia on November 11, 1909. He had married Catherine Culthane in 1885. Mary C. Holohan married Francis Shafer, a printer. The last surviving Surratt boarder, Mary died on February 1, 1927, of a cerebral hemorrhage. All of the family was buried at Mount Olivet. 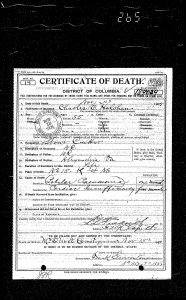 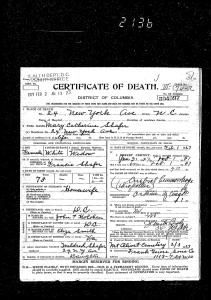 Mary Apollonia Dean. This splendidly named little girl, a day student at the nearby Visitation School for girls, was about ten when she joined the Surratt household. Her mother, Mary Dean, lived near Alexandria, Virginia, a short distance from Washington.

Where young Mary slept in the boardinghouse is unrecorded. Along with Nora Fitzpatrick, she went to the theater in March 1865 with John Surratt and Lewis Powell. Before the assassination, she left Washington to spend the Easter holiday with her family, and never returned to the boardinghouse. On April 24, 1865, her mother asked the mayor of Washington to help her recover her daughter’s trunk from her H Street lodgings.

On December 19, 1872, in Fairfax County, Virginia, Mary Apollonia Dean married the even more splendidly named Napoleon Bonaparte “Harry” Grant. Then, on February 18, 1894, tragedy struck: Harry, who was employed as an engineer on the Richmond and Danville Railroad, was fatally injured when a freight train and a work train collided near Proffits, Virginia.  A widow with two children, Mary Grant received $2,000 from a fraternal organization and $4,000 from her husband’s employer, but she was shattered by her husband’s death. Just three months later, on May 14, 1894, she died. The Alexandria Gazette reported that she had never recovered from the shock her nervous system received from her husband’s death, and that “her death is believed to have been the result of the poignant sorrow and shattered nerves from which she had ever since suffered.” Just a few weeks later, her administrator auctioned off her household goods, which included “two fine parlor sets” and carpets. Husband and wife were buried in Alexandria’s St. Mary’s Catholic Cemetery. 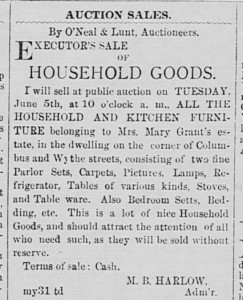 So here they are–seven ordinary, middle-class roomers, all of whom would likely have vanished quietly into obscurity had it not been for the events of April 14, 1865.