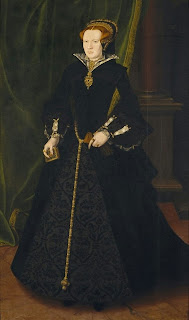 One of the things I enjoy most is finding things that the people in my novels wrote themselves–letters, wills, and, in some cases, poetry.

Mary Dudley, the oldest surviving daughter of John Dudley, Duke of Northumberland, married Henry Sidney in March 1551 at Esher in Surrey, in a private ceremony; in May, a public wedding was held at Ely Place, Northumberland’s London mansion. (At that time, Northumberland was the Earl of Warwick, having not yet become a duke.) Sidney, eight years older than Edward VI, was a companion to the young prince and became a gentleman of his privy chamber after the young Edward VI became king. Why the young couple had two wedding ceremonies is unexplained: had the pair made a runaway match? Henry Sidney was a few months shy of his twenty-second birthday; Simon Adams has estimated Mary Dudley’s birthdate as being anywhere from 1530 to 1535. After Northumberland’s ill-fated attempt to put Lady Jane Grey on the throne in 1553, Henry Sidney was soon reconciled to the new queen, Mary I, but he remained loyal to his wife’s family and was among those who helped the surviving Dudley brothers regain their freedom following their lengthy imprisonment in the Tower. Mary Sidney became a favored lady of Elizabeth I, a decidedly mixed blessing, for she nursed Elizabeth through an attack of smallpox, caught the infection, and was badly scarred. Mary is shown here in a portrait by Hans Eworth, dated between 1550 and 1555.

Henry Sidney and Mary Dudley are most notable, perhaps, for being the parents of Philip Sidney, the celebrated poet-courtier. Their daughter Mary, Countess of Pembroke, was herself a writer and a literary patroness.

Mary Dudley also tried her hand at writing, as did her husband. On two blank pages of Hall’s Union of the Two Noble and Illustrate Famelies of Lancastre and Yorke, now in the hands of the Folger Shakespeare Library in Washington, D.C., the spouses traded verses, Henry in Latin, Mary mostly in English, with a bit of French and Latin mixed in. I’ve obtained photographs of the pages and would love to post them here, but I haven’t yet obtained permission to do so. I hope to get permission, because the couple’s handwriting is lovely and quite legible. The first two verses have been transcribed by Alfred Bill in Astrophel, or the Life and Death of the Renowned Sir Philip Sidney; the last two are my own maiden attempts at transcription (if anyone more accustomed to reading sixteenth-century English than I am wants to have a stab at a transcription, I’d be happy to pass the photograph on to you!)

To whyshe the best and fere the worst
are to points of the wyese.
To suffer then whatt happen shall
that man is happy thryese.

Of all thinges the newest is the best,
save love and frinship, which
the elder it waxeth is ever the better

If not for to spede thou think again
Will not the thing that thou moveth not attain
for thou and none other art cause of thy [lett? loss?]
if that which thou mowest not thou [?]
to express scriptini manire felix

Upon thy good daye
have thou in mind the [unware?]
woe that may come behind

4 thoughts on “Mary Dudley Sidney Writes in a Book”