In her new book on Mary Boleyn, Alison Weir devotes an appendix to the subject of portraiture, including the identity of the sitter in this well-known painting, usually identified as one of Mary Boleyn:

Weir writes that because the sitter was wearing ermine, the portrait is unlikely to have been Mary Boleyn, because ermine was a “fur reserved exclusively for royalty and peers of the realm.” She also notes that six versions of the portrait exist and questions whether there would have been sufficient interest in Mary to merit multiple copies. Instead of Mary Boleyn, Weir suggests, this may be a portrait of Frances Brandon, made to mark her marriage to Henry Grey.

I don’t pretend to have researched Tudor costume, Tudor portraiture, or Tudor sumptuary laws in depth, but my search of what materials I have on hand doesn’t suggest that the wearing of ermine was as restricted as Weir claims.  In her book Rich Apparel, Maria Hayward  summarizes the four acts of apparel enacted during Henry VIII’s reign. By 1533, sable had been restricted to the king and his family, while black genette or lynx was restricted to dukes, marquesses, earls, and their children, or barons unless they were a knight of the Garter. Ermine, however, is not mentioned at all.

Notably, Elizabeth, Lady Vaux, wife of Thomas Vaux, a mere baron, is shown below conspicuously wearing ermine, which suggests that the fur wasn’t reserved for the highest  echelons of the nobility. (Fun Queen of Last Hopes fact: Thomas Vaux was the grandson of Margaret of Anjou’s devoted lady-in-waiting, Katherine Vaux.) Here is Lady Vaux showing off her stoats: 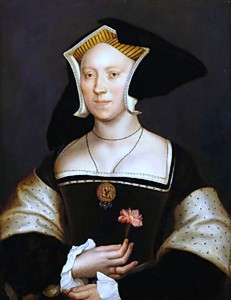 Hayward also notes that an Elizabeth Speke left in her will a black satin gown “purfled [edged] with powdered ermines.” It therefore seems to me that the ermine in itself isn’t enough to rule out Mary Boleyn as the subject of the first portrait, especially since Mary gained status after her father was made a viscount in 1525 and an earl in 1529. Whether there was sufficient interest in Mary for multiple copies of the portrait to be made is another question, but I would think the same objection would apply to Frances, who is known to us today mainly because of her daughter. In any case, if the portrait is not one of Mary, it could be of any number of ladies who were sufficiently well-off to afford ermine.