It’s a beautiful spring evening in Washington, D.C., way too nice to be sitting in a hotel room, but I had a marvelous two days and wanted to talk about them while they were fresh in my mind. (Apologies for the substandard photography.)

When I heard that Ford’s Theatre was planning a round-the-clock tribute from April 14 to April 15 to commemorate the 150th anniversary of Lincoln’s assassination, I was determined to get up to Washington , as I was too young to care about the 100th anniversary and probably won’t be around for the 200th anniversary. So as my husband was kind enough to accommodate me, here I am!

I got excited as soon as I approached my hotel in the afternoon of April 14 and saw two young women in hoop skirts getting out of a taxi. The hotel, which is just a block from Ford’s Theatre, played host to many Civil War reenactors , here to depict some of the witnesses to this most tragic night in American history.

As the crowds began to fill the block of 10th Street on which the theater sits, Ford’s Theatre presented “Now He Belongs to the Ages: A Lincoln Commemoration.” I was one of the lucky ones who had tickets to this event (which was also live-streamed via the Internet). There were many wonderful moments, such as opera diva Alyson Cambridge performing a piece from Faust that Lincoln would have heard during one of his many evenings at Ford’s Theatre, the young actress Lauren Williams reading Julia Taft’s recollection of Lincoln’s relationship with his son Tad, and the cast performing “The Battle Hymn of the Republic,” but perhaps my favorite part was singer Judy Collins blowing a kiss to the empty presidential box, then inviting the audience to join her in singing “Amazing Grace.”

In the midst of “Old Hundredth,” the Federal City Brass Band fell silent, marking the time at which Booth’s bullet struck Lincoln. We filed downstairs to find the street packed with a crowd holding candles aloft as reenactors playing figures such as actress Laura Keene and actor Harry Hawk recounted the events of the terrible night. 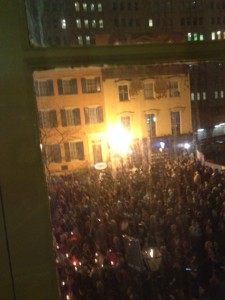 The vigil lasted all night, but I confess to leaving around midnight to catch a few hours’ sleep. At five in the morning, though, I was up to tour the theatre and to see its special exhibit: “Silent Witnesses: Artifacts of the Lincoln Assassination.” For the first time, objects associated with the tragic event—the contents of Lincoln’s coat pocket, his Brooks Brothers greatcoat, Mary Lincoln’s beautiful velvet cape, fragments from the gowns of Mary, her guest Clara Harris, and Laura Keene, Booth’s derringer, and more—were brought together for all to behold.

If you’ve been to Ford’s Theatre, you know that the block it sits on is thoroughly commercialized, with a souvenir store on one corner and a diner known as the Lincoln Waffle Shop. What better place to get a bite to eat after the exhibit than the waffle shop?

I then rejoined the growing crowd in the street. At 7:22 a.m., re-enactor emerged from the Petersen House, where Lincoln was taken to die, to announce the President’s death. There followed a beautiful ceremony where the National Park Service laid a wreath at the Petersen House in memory of the President. Even though this ceremony was taking place during Washington’s rush hour, with cars honking and construction machinery humming, it was if those of us on 10th Street were truly transported back in time for a little while. 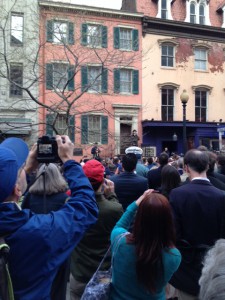 With the main part of the ceremony at Ford’s over, I went to the National Museum of Health and Medicine in Silver Spring, Maryland, which has its own collection of artifacts, including the fatal bullet that wreaked so much havoc.

Back in Washington, I went to the Smithsonian’s National Museum of American History, where the barouche that carried President and Mrs. Lincoln is on loan from the Studebaker National Museum. 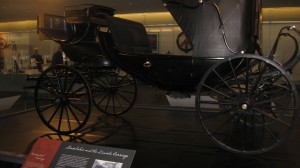 Finally, I made one last stop at the Newseum, which sits on the site of the National Hotel, where John Wilkes Booth was living at the time of the assassination. There were all the editions of the New York Herald from April 15, 1865, breaking the story of the assassination and adding details (as well as a false report of Booth’s capture) as they became available.

So there ended my Lincoln-related activities for the day. One thing that really struck me was the mix of people I saw who are passionate about Lincoln and about history, like the tattooed young woman in front of me at the theater who showed up  in a beautiful Victorian gown, the people crowding around a historian being interviewed as if he were a rock superstar, the woman who brought flowers all the way from Germany for her own tribute to the President, and the many people I saw close to tears this morning. Whatever your historical passion is, I hope that if a similar opportunity comes your way, you will seize it. You won’t regret it. 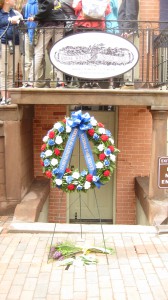