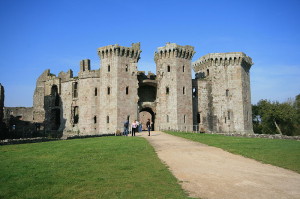 To start with, we do not know when John or Katherine were born or the identity of their mothers. It is often confidently asserted by admirers of Richard III that the children were born before his marriage, and while it seems likelier than not that Katherine at least was the product of his bachelor days, it is impossible to say this with certainty. We do not even know whether the children had the same mother.

Historian Rosemary Horrox, however, has identified a possible candidate as Katherine’s mother: Katherine Haute, who received an annuity of five pounds from Richard’s estates in East Anglia. Horrox suggests that Katherine was the wife of James Haute, a kinsman of Elizabeth Woodville. Had young Richard, Duke of Gloucester, wishing to make honorable provision for a former mistress, sought the queen’s help in arranging a suitable match for her? If so—and this is, of course, no more than speculation—it is yet another factor undermining the claim that the relationship between Richard and the queen was hostile before 1483.

Nothing is known about Katherine Plantagenet’s early years, or where she spent them. She is not named in the records of Richard’s coronation as one of the ladies receiving robes for the occasion. Richard’s seizure of the throne in 1483, however, wrought a vast change in Katherine’s own fortunes: the following year, she married an earl.

William Herbert, Earl of Huntingdon, born in 1455, was the heir of William Herbert, Earl of Pembroke, who had been captured at the battle of Edgecote and executed on the orders of Richard Neville, Earl of Warwick, in 1469. Whereas Pembroke had been a powerful and valued supporter of Edward IV, gaining his earldom (and Warwick’s enmity) as a result, the younger William Herbert had enjoyed little royal favor once he reached his majority. D. H. Thomas has suggested that William was inept or, more kindly, that William was dogged by ill health. Indeed, as early as 1483, when he was only about twenty-eight, he made his will.

Herbert had no reason to regret the passing of Edward IV. Although his first wife, Mary, had been a younger sister of Elizabeth Woodville, she had died several years before, so any benefit from the connection had died with her. Indeed, for the benefit of Edward IV’s heir, Prince Edward, Herbert had been forced in 1479 to exchange his earldom of Pembroke for the less valuable earldom of Huntingdon. From the start, then, he was a natural ally of Richard III, whose coronation he attended, bearing Queen Anne’s scepter. He may have served as chamberlain to Richard’s only legitimate son, Edward.

On February 29, 1484, Richard III and William Herbert entered into an indenture arranging the marriage of William to Katherine Plantagenet. The indenture, transcribed by D. H. Thomas, reads,

Richard III duly granted William and Katherine (referred to as “Dame Katharine Plantagenet”) the annuity of 400 marks from the lordships of Newport, Brecknok, and Hay on March 3, 1484. The next grant, in May 1484, speaks of Katherine as William’s wife. Another grant followed on March 8, 1485.

These bare financial records are all that we know of Katherine’s life during her father’s brief reign. Whether she was old enough to consummate her marriage, whether she was happy in it, and whether she was close to her father are matters that can be only guessed at. Probably she would have spent much of her married life at Raglan Castle, the Herbert family seat in Monmouthshire.

In 1485, William Herbert played no part in impeding Henry Tudor’s march through Wales, nor is he recorded as having fought for his father-in-law at Bosworth. It may be, as D. H. Thomas suggests, that he simply had no military capacity; alternatively, Thomas suggests, Herbert might have been reluctant to move against Henry, who as his father’s ward had spent some time in the Herbert household as a youth. There was also the possibility that Henry would have married William’s sister if he had been unable to marry his first choice of bride, Elizabeth of York. If William did nothing to hinder Henry Tudor, he seems to have done nothing to help him either, for William himself did not receive a pardon until September 22, 1486.

Until recently, the Wikipedia article on Richard III claimed that following the battle of Stoke in June 1487, Katherine was “almost certainly arrested at Raglan Castle.” The Wikipedia editor gave no supporting evidence for this assertion, nor have I found any. Indeed, there is no evidence that either the earl or the countess was involved in the rebellion or that they were out of favor with the king at this point.

William Herbert attended Queen Elizabeth’s coronation in November 1487. The herald who recorded the event noted that “at that time the substance of all the earls of the realm were widowers or bachelors,” and named William, Earl of Huntingdon, as one of the widowers. When Katherine had slipped out of the world is unknown, as is so much else about her. It has been speculated that she died in childbirth, but if she did bear her husband any children, none survived the earl, who himself died in the summer of 1490 “in ye flower of his age.”

ETA: Erika Millen on Facebook pointed out that Horrox suggests in her Oxford Dictionary of English Biography entry on Richard that rather than Katherine dying, Herbert might have repudiated his marriage after Henry VII came to power. In that case, the “widower” would refer to Huntington’s first marriage, to Mary Woodville.

D. H. Thomas, “The Herberts of Raglan as Supporters of the House of York,” Ph.D. dissertation, 1967.