On July 6, 1865, General John F. Hartranft, who had been placed in charge of Washington, D.C.’s Old Arsenal Prison, went from cell to cell, informing Mary Surratt, Lewis Powell (known at the time by his alias of Lewis Payne), George Atzerodt, and David Herold that they had been condemned to die for their roles in the assassination of President Lincoln–and that the executions would take place the following day. (The other four defendants, sentenced to imprisonment, would not learn of their sentences until after the hangings took place.) Soon, the newsboys of Washington began shouting the tidings, and workers at the Old Arsenal began building a scaffold for four.

The condemned were each allowed to ask for clergy to support them in their final hours. Mary Surratt chose two priests: Father Jacob Walter of St. Patrick’s Church, and Father Bernadine Wiget of St. Aloysius’s Church. They hastened to the prison to prepare Mary for her impending death.

In the sweltering summer heat of Washington, Anna Surratt, Mary’s daughter, went to the White House to beg for her mother’s life, but was refused a meeting with the President, who referred her to Judge Advocate General Joseph Holt, who had been the chief prosecutor. Holt referred her back to the President. Frederick Aiken and John Clampitt, the inexperienced attorneys who had been entrusted by senior counsel Reverdy Johnson with most of Mary’s defense, did not learn of their client’s sentence until that afternoon. They telegraphed Reverdy Johnson for advice, and were told to seek a writ of habeas corpus. At 2 a.m. on the morning of July 7, Judge Wylie from the Supreme Court of the District of Columbia, awakened from sleep, signed the writ. For a few hours, it appeared that Mary would cheat the hangman.

On the eve of the hangings, the man appointed to carry out the executions, Captain Christian Rath, fashioned three nooses with seven turns apiece. Wearying of his task, he made only five turns on the fourth noose–that intended for Mary Surratt. Given the likelihood of a pardon due to Mary’s age and sex, he reasoned, it would not be needed.

On the morning of July 7, 1865, Anna Surratt, accompanied by an unnamed female friend, went to the White House to once again beg an audience with the President. Also at the White House were John Brophy, a family friend of the Surratts who was convinced of Mary’s innocence, and Charles Mason, who appears to have no connection to the family but who did not wish to see a woman hang. None were allowed access to the President. John T. Ford, the operator of the theater where Lincoln had been shot, wrote to the President on Mary’s behalf, to no avail.

As Anna and the others waited at the White House, a lady appeared: Adele Douglas, the widow of Senator Stephen Douglas. Pushing her way past the guards, who could hardly stop one of Washington’s grand dames in her tracks, Mrs. Douglas made her way upstairs. No one knows what she said to the President, but he was unmoved by her pleas for Mary Surratt’s life. When the senator’s widow returned downstairs in defeat, John Brophy begged her to try again. She did, with no success. As President Johnson had also suspended the writ of habeas corpus obtained earlier that morning, time and hope were running out. 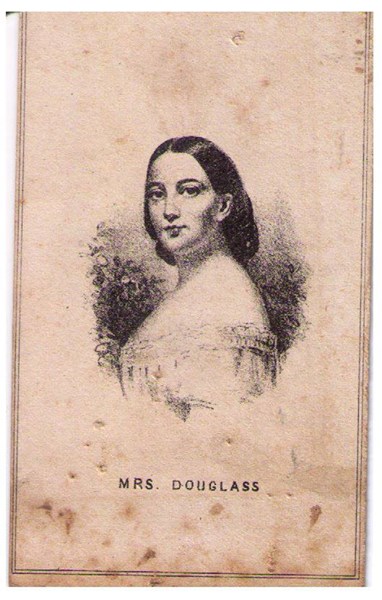 Defeated, Brophy and Anna returned to the Old Arsenal, outside of which vendors were selling cakes and lemonade to those filling the streets near the compound–although only a few possessed the passes that would allow them go inside the prison walls to see the hangings. Anna joined the others who were saying their farewells to the condemned–Herold’s sisters, Atzerodt’s brother and common-law wife, the defendants’ lawyers. None of Powell’s relations was there to bid him good-bye. Powell’s lawyer. learning his client’s identity, had written to his father in Florida, but the letter did not arrive until the day before the executions. Meanwhile, photographer Alexander Gardner stationed his camera in place, ready to capture the hangings for posterity.

At around 1:00 p.m., the four prisoners, escorted by soldiers and accompanied by their spiritual advisors, processed to the newly built scaffold, where four chairs and four nooses awaited them. Mary Surratt, her face veiled, the skirts of her black dress dragging on the ground, led the procession. The prisoners took their seats and listened as their death warrants were read and the clergy offered prayers. Umbrellas were raised to protect Mary and some of the others on the scaffold from the blistering midday sun.

The preliminaries over, the four prisoners were made to stand as they were bound with strips of cloth, then fitted with a noose and a white hood. Lieutenant Colonel William McCall, who had Mary in his charge, carefully removed her veil and bonnet and replaced it with the noose and hood. It was the first time the federal government would hang a woman.

At around 1:25, Captain Rath clapped his hands three times–the signal for the soldiers standing underneath the scaffold to knock out the props which held the scaffold trap doors in place. The four condemned plunged to their deaths. Mary and Atzerodt died almost instantaneously, but the two youngest conspirators, Herold and Powell, struggled for minutes, Powell trying to lift himself into a sitting position. After about seven minutes, even he gave up life.

About twenty minutes later, the defendants were pronounced dead, then cut down. Nearby, their coffins and freshly dug graves awaited them. But theirs were not the first burials at the prison. One corpse already lay in its grave there–that of John Wilkes Booth, the assassin who had brought the four to their deaths.