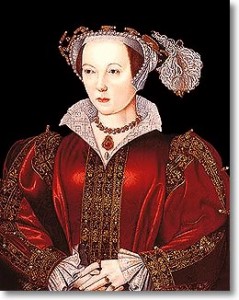 Read about Katherine Parr or Jane Grey, and you’ll soon come across the statement, in various guises, that when Jane Grey came to live with Katherine Parr, Katherine gave Jane the maternal nurturing of which she had been deprived.  It was then, the story usually goes on, that Jane first found acceptance of her intellectual gifts. Katherine Parr’s death, the story dolefully concludes, was therefore not only a tragedy for Katherine but for Jane, who was returned to her dreadful parents and consigned once again to a life of misery.

As with so many aspects of Jane Grey’s story, fiction in this instance has heavily intruded upon fact.

First, as Leanda de Lisle has pointed out, the story that the nine-year-old Jane was part of Katherine Parr’s household in 1546 and was a witness to Katherine Parr’s famous  confrontation with Henry VIII following Katherine’s learning of her imminent arrest is a product of Victorian confusion of “Lady Lane” with “Lady Jane.” The passage in question, as reported by John Foxe, places Lady Lane, not Lady Jane, at the scene: “And so first cōmaundyng her Ladyes to conuey away their bookes, which were agaynst the law, the next night folowyng after supper, shee (wayted upon only by the Lady Harbert her sister and the Lady Lane, who caried the candell before her) went vnto the kynges bead chamber, whom she found sittyng and talkyng with certeine Gentlemē of his chamber.” Nothing  places Jane Grey in Katherine Parr’s court during Henry VIII’s reign, though her mother, Frances, was among the queen’s ladies and might have brought young Jane to visit at court from time to time. (When Frances’s widower, Adrian Stokes, died, a portrait of Katherine Parr was among his household furnishings. If this came from Frances, perhaps she herself had been fond of the queen.)

Second, it is often forgotten that Jane was not Katherine Parr’s ward: she was Thomas Seymour’s.  According to the deposition of Jane’s father, Henry Grey, then Marquis of Dorset, Seymour approached him shortly after Henry VIII’s death to propose that Jane be put into his care so that Seymour could promote Jane’s marriage to the young Edward VI.  Dorset, having agreed to Seymour’s proposal, sent for Jane, “who remained in [Seymour’s] house from that time continually until the death of the Queen.” Susan James, one of Parr’s biographers, has suggested that Jane remained at Thomas’s house at Seymour Place even after Seymour’s marriage to Katherine Parr became public and that she did not join the queen’s household until after the Lady Elizabeth left it in May 1548. This may be the case; there is certainly no mention of Jane’s presence in the accounts of the sexually charged horseplay between Seymour and Elizabeth, and Jane never gave a deposition about the relations of Seymour and the princess when Seymour later fell from grace. On the other hand, it seems more likely that once Seymour and Katherine made their marriage public, Jane would have spent at least some time with the rest of the “family”–Seymour, Katherine, and the Lady Elizabeth–at Chelsea and Hanworth instead of remaining constantly at Seymour Place.

In  early 1548, after Elizabeth’s tutor died, Elizabeth succeeded in getting Roger Ascham appointed as her new tutor. It may have been then that Jane made the acquaintance of Ascham, who would visit her at Bradgate several years later and record their meeting for posterity.

Sadly,  while we know little of Jane’s relationship with Katherine during the queen’s life, we do know that Jane served as chief mourner at Katherine’s funeral: “Then, the Lady Jane, daughter to the lord Marquis [of] Dorset, chief mourner, led by a[n] estate, her train borne up by a young lady.” This may be a sign that Jane and Katherine had become close; on the other hand, it may simply be that Jane was chosen for the role because she was the highest-ranking lady available on relatively short notice.

It is certainly probable that the queen and Jane, both of whom enjoyed intellectual pursuits, found pleasure in each other’s company and that Jane admired and respected the queen. Probable–but not recorded. The  bare facts above are all that is known about Jane’s relationship with Katherine Parr. The rest of the oft-told tale–that in Katherine’s care, Jane found happiness for the first time in her young life, that Katherine’s encouragement helped Jane to blossom as a scholar, that Katherine became a mother figure to Jane, that Jane was unhappy to return home–is romantic embroidery, perfectly reasonable in fiction but irritating when it intrudes itself into nonfiction.

Susan James, Kateryn Parr: The Making of a Queen

Leanda de Lisle: The Sisters Who Would Be Queen

P. F. Tytler, England under the Reigns of Edward VI and Mary