I belong to several Wars-of-the-Roses-related groups on Facebook, and every week or so, the inevitable question arises: Did Richard III murder his nephews? Each time, at least one person comments that Richard did not; rather, the murderer was Margaret Beaufort, Countess of Richmond. After all, we’re told,  she was a ruthlessly ambitious woman who would do anything to put her son, Henry Tudor, on the throne.

But there was another formidable matriarch in England in 1483, one who almost never gets named as a suspect, but who arguably had as good a motive , means, and opportunity as Margaret. Her name? Cecily, Duchess of York, mother to Edward IV and Richard III. 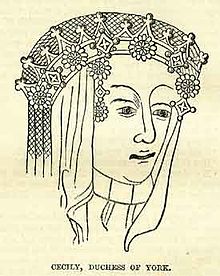 Before I go further (and before some of you start writing indignant comments), let me make myself clear: I do not believe that the Duchess of York was responsible for the deaths of her grandsons. I do not believe that Margaret Beaufort was responsible for their deaths either. Rather, I am writing simply to point out that if one can entertain the idea that Margaret was a murderer, logic dictates that one should also entertain the idea that Cecily was one. Why?

Cecily’s objection to her son Edward IV’s marriage to Elizabeth Woodville is well known, and there’s little indication that she ever warmed to her daughter-in-law. On these lines, it has been suggested that she supported her son Richard III’s bid for the throne, preferring to see him as king instead of her half-Woodville grandson Edward V. Assuming for the sake of argument that Cecily did indeed approve of Richard III’s actions, it stands to reason that she would want to see him remain on the throne once he got there. The plot to free Edward V and his brother from the Tower that emerged soon after Richard’s coronation could well have made Cecily to decide to help Richard’s cause by eliminating her grandsons.

Cecily had at least as good means and opportunity to kill Edward IV’s sons as did Margaret Beaufort, and quite probably better ones. As the mother of two kings, Cecily would have had the best of connections at court, and her house in London would have given her contacts in the city as well. Even if she couldn’t get into the Tower herself, she certainly had as much ability as did Margaret Beaufort to gain access to those who could. Indeed, as the boys’ grandmother, she had a perfectly plausible excuse to visit them in the Tower (perhaps taking them some poison-laced treats), unlike their more distant relation Margaret.

Furthermore, if Margaret Beaufort arranged for the deaths of Edward IV’s sons during Richard III’s reign in order to advance the cause of her son Henry Tudor, she was taking an enormous risk: if caught, she faced imprisonment at best, execution at worst, and her actions could have been used to discredit her son, putting paid to his chances of gaining support for his invasion. If Cecily, on the other hand, arranged for the boys’ deaths, she ran comparatively little risk, for even if Richard did not welcome such meddling,  it would have hardly benefited him to publicize the fact that his own mother killed her grandsons.

One could argue that Cecily was too pious to arrange for the deaths of two innocent boys. But Margaret was equally pious, and those who argue for her guilt have never allowed this to stand in their way.

Cecily and Margaret had each known more than her share of trouble. The daughter of a possible suicide, Margaret was a widow and a mother by age fourteen. From 1455 to 1471, her male Beaufort relatives were killed one by one by the Yorkists, and her only son grew up in exile abroad. Cecily herself suffered the deaths in battle of her husband and her son Edmund, the execution of her son George, and the demise of a number of her children by natural causes. If life had hardened Margaret, there is every reason to believe that it hardened Cecily as well.

Moreover, the men in Cecily’s life had shown themselves to be ruthless when the occasion demanded it: her husband, Richard, Duke of York, had taken the opportunity to rid himself of Edmund Beaufort, Duke of Somerset, on the streets of St. Albans; her son Edward had ordered the execution of his own brother George; and her son Richard had executed William, Lord Hastings, without a trial. Perhaps Cecily, convinced that she was acting for the good of the realm, followed their example.  Perhaps she even decided to take the sin of murder upon herself to spare Richard the responsibility.

Of course, there is a glaring difficulty in assigning guilt to Cecily: lack of evidence.  No contemporary source suggests that Cecily had a hand in the deaths of Edward V and his younger brother. But no contemporary source suggests that Margaret did either. As the evidence stands today, neither the duchess nor the countess could be convicted in a court of law of murder. Yet whereas as far as I know only one or two rather obscure novels have cast Cecily in the role of murderess, Margaret (thanks largely in part to the television series “The White Queen”) has become a leading suspect, often crowding out Richard III and the perennial favorite, Buckingham.

Asked for evidence of her guilt, those implicating Margaret point rather vaguely to her ambition and her devotion to her son  and, more specifically, to her role in the rebellion of October 1483. But while one could try to build a case for Margaret’s guilt upon this shaky foundation, it certainly doesn’t rule out Cecily as an alternative suspect.

As I said earlier, I do not believe that either Margaret or Cecily was responsible for the deaths of the Princes in the Tower. But for those who are convinced that Margaret was responsible, I leave with a parting thought. Motherly love is among the strongest of motivators. If maternal feeling could have driven Margaret to commit infanticide in order to bring her only son to the throne, why couldn’t it have driven Cecily to commit infanticide to keep her last surviving son there?

21 thoughts on “If Margaret, Why Not Cecily?”