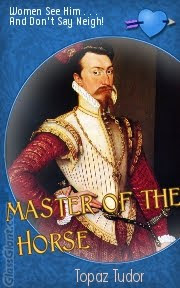 First, a visit from the Bard:

I do not now fool myself, to let imagination jade me; for every reason excites to this, that my lady loves me. She did commend my yellow stockings of late, she did praise my leg being cross-garter’d; and in this she manifests herself to my love, and with a kind of injunction drives me to these habits of her liking. I thank my stars, I am happy. I will be strange, stout, in yellow stockings, and cross-garter’d, even with the swiftness of putting on. Jove and my stars be praised!

Malvolio, the steward in Twelfth Night who fancies that his noble lady, Olivia, is in love with him, of course, was the victim of a trick. But the idea of a high-born lady marrying one of her servants wasn’t an unheard-of one in Tudor England, for here are three Tudor men who managed to land duchesses:

Born in 1517, Bertie was the gentleman usher of Katherine Brandon (Willoughby), the dowager Duchess of Suffolk, who was the widow of Henry VIII’s great friend Charles Brandon, Duke of Suffolk. Katherine, born in 1519, married Bertie around 1552, the year after both of her sons had died of the sweating sickness. Bertie was an Oxford graduate who had previously served Thomas Wriothesley; he was described as “master of the French, Italian, and Latin tongues, bold in discourse and quick at repartee.” These were qualities that must have appealed to the duchess, who herself was possessed of a caustic wit.

The fervently Protestant couple and their infant daughter, Susan (an eminently sensible and proper name), found it prudent to leave England during Mary I’s reign. While abroad, they had a son, Peregrine, whose name reflected their vagabond status during those years. Susan later married Reginald Grey, who with the duchess’s aid eventually became the Earl of Kent when the title was revived. He died as a young man, however, and Susan subsequently married John Wingfield. Peregrine, who became Lord Willoughby, married Mary de Vere, the daughter of the sixteenth Earl of Oxford.

Richard Bertie found his relatively low birth (his wife described him as “meanly born”) somewhat of a handicap. Despite his duchess’s efforts, he never was able to assume the title of “Lord Willoughby,” although his son was allowed to do so. He did, however, serve in Parliament and as a local official in Lincolnshire, and he was granted an M.A. from Cambridge. Bertie composed an answer, which was privately circulated, to John Knox’s Monstrous Regiment of Women.

Katherine died on September 19, 1580. Her first husband had been buried at St. George’s Chapel, Windsor. She was buried at Spilsby Church in Lincolnshire, where Bertie himself was buried after his death on April 9, 1582. Their monument, containing their busts, can be seen there today.

Stokes (variously described as a master of horse, an equerry, and a steward) was in the service of Frances Brandon, Duchess of Suffolk, who was Charles Brandon’s daughter and therefore Katherine Brandon’s stepdaughter (Katherine had been Charles’s ward). I’ve posted recently on the myths surrounding the marriage of Frances and Adrian. They were married in 1555, about a year after Frances’s first husband, Henry Grey, Duke of Suffolk, was beheaded for his role in Wyatt’s rebellion against Mary I. The couple had one daughter, who died as an infant.

Horace Walpole recounts the story that Elizabeth I greeted the news of the marriage with the remark, “‘What! has she married her horse-keeper?’ ‘Yes, madam,’ replied my lord Burleigh, ‘and she says your majesty would like to do so too.'” This story is clearly apocryphal; Elizabeth was not queen when Frances and Adrian married, nor was Robert Dudley, the object of Frances’s alleged rejoinder, Elizabeth’s “horse-keeper” in 1555. Frances’s motives in making the match are unknown, but marriage to a man who was entirely unsuitable for a queen’s consort would have sent a strong message to Mary I, who had executed Frances’s daughter Jane, that Frances herself had no designs on the crown. William Camden, Elizabeth I’s biographer, saw this as the motive for Frances’s marriage: he wrote that Frances, “forgetting the Nobility of her Lineage, had married Adrian Stokes, a mean Gentleman, to her Dishonour, but yet for her Security.”

Frances died on November 21, 1559. As befitted her status as a niece of Henry VIII, she was buried at Westminster Abbey. In her will, Frances placed all of her property in the hands of Adrian, her sole executor:

In the name of God, Amen. I ladye Frances Dcches Of Suffolke, wife to Adryane Stockes esquyer, considering howe uncerteyn the howre of deathe is, and how certeyne ytt ys that every creature shall dye when ytt shall please God, being sicke in bodie but hole in mynde, thankes be to Almightie God; and considering with my self that the said Adrian Stockes my husbande is indebted to dyvers and sundrye persones in greate somes of money, and also that the chardge of my funeralles, if God call me to his mercye, shalbe greate chardgcs to hym, mynding he shall have, possesse, and enjoye all goodes, catalles, as well reall as personall, as all debtes, legacies, and all other thinges whatsoever I may give, dispose, lymytt, or appoynt by my last will and testament for the dischardge of the saide debtes and funeralles, do ordeyne and make this my present last will and testament, and do by the same constitute and make the saide Adryane Stockes my husbande my sole executor to all respectes, ententes, and purposes. In wytnes whereof I have hereunto putt my hande and seale the ixtb daye of November, in the furst yere of the reigne of our soveraigne ladye Elizabeth, by the grace of God quene of Englande, Fraunce, and Irelande, defendour of the faythe, &c. Fraunces Suffolke.

Adrian made a second marriage to Anne Carew, the widow of Nicholas Throckmorton, and went on to serve in Parliament and on local commissions. He died on November 3, 1585. In his will, he left one of his stepdaughters “a bed in the Dutches Chamber” at Beaumanor, where he and Frances had spent part of their marriage. He was buried in the chapel there.

Born in 1519, Francis was employed in the household of Edward Seymour, Duke of Somerset. Somerset, brother to Jane Seymour and uncle to Edward VI, was executed in January 1552. His wife, Anne (nee Stanhope, born around 1510) herself was confined to the Tower until Mary I came to power in 1553, and Francis had his goods confiscated for a time. The widowed duchess had been left with nine children, and it was likely Newdigate’s assistance in helping her piece together her life following her release from the Tower that led her to marry him in 1558.

It was a surprising match for the duchess, whose historical reputation (quite possibly exaggerated) is that of a haughty, grasping, and overbearing woman. Anne, however, appears to have been fiercely devoted to those close to her, and she soon used her influence to get her new husband into Parliament. In 1574, the sixtyish duchess wrote to William Cecil about a slighting remark made about her husband, “By redyng my L. Chamberlaynes leter and my answer you may knowe my grefe. The lyke was never offered to any, nor the lyke threats of contempt, withowt offendyng any law, have ben gyven owt as to Mr. Newdegat. Yf your Lordship canne do any good to stay thys defacement to the world, I wolld be glad of yt.”

In 1560, Francis’s stepson, the Earl of Hertford, secretly married Adrian Stokes’ stepdaughter, Katherine Grey. The bride and groom were clapped into prison by Elizabeth I, and both stepfathers were questioned. Neither, however, suffered for their stepchildren’s impetuous match.

Francis died on January 26, 1582. In his will, dated May 31, 1580, he wrote, “Since I have received all my preferment by the Duchess’s marriage, so I bequeath her all I am able to give her.” He made her his sole executor and asked to be buried at Hanworth, which the duchess had been granted shortly before their marriage. Anne died on April 15, 1587. Like Frances, Duchess of Suffolk, she was buried at Westminster Abbey.

So what did it take to land a duchess? Being a Protestant helped a lot; Richard Bertie’s religious beliefs forced him to flee abroad with his wife. While both Stokes and Newdigate toed the line during Mary I’s reign, both had strongly Protestant beliefs: Stokes directed that he be buried “without any pomp or solemnity as yt hath bene used in the Papistes tyme,” while Newdigate commended his soul to be saved “only by faith in Christ’s blood-shedding.” Two of the three men married a woman whose first husband had died on the scaffold. Perhaps what all three men had in common, however, was loyalty in hard times and an ability to make themselves useful to their widowed duchesses, which led to the ultimate reward.

And who knows, maybe they put on yellow stockings. 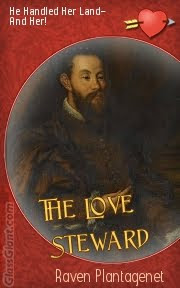 Historical Manuscripts Commission, Report on the Manuscripts of the Most Honorable the Marquess of Bath, Preserved at Longleat. Vol. IV, Seymour Papers. London, Her Majesty’s Stationery Office, 1968.

John Strype, Brief Annals of the Church and State Under the Reign of Queen Elizabeth (vol. 3). London, 1731.

5 thoughts on “How To Marry a Duchess: A Valentine’s Day Post”