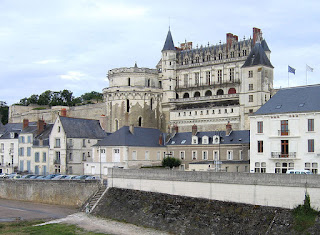 On December 13, 1470, Edward of Lancaster and Anne Neville were married. Their marriage was due to one of the more unlikely alliances of the Wars of the Roses, that between Margaret of Anjou, Edward’s mother, and Richard Neville, Earl of Warwick, Anne’s father. Anne, born on June 11, 1456, was fourteen; her groom, born on October 13, 1453, was seventeen.

The marriage had been in the works for some time. Edward and Anne had been betrothed at Angers on July 25, 1470. A proxy may have stood in for Anne, for she might not have even been present: Sforza de Bettini, the Milanese ambassador in France, wrote from Angers on July 24, 1470, that Warwick, Margaret of Anjou, and Edward were at Angers, but he did not mention Anne’s presence. On July 28, 1470, he wrote that Anne had been “sent for” to Amboise, where the marriage would be consummated. In fact, between the need for a papal dispensation and the need of Warwick to take England for his new Lancastrian allies, the marriage itself would not take place for months.

Thanks to historical fiction, with considerable help from nonfiction like Paul Murray Kendall’s biography of Richard III, two myths surrounding the marriage of Anne and Edward have become firmly entrenched: the first, that Anne was aghast at the thought of marrying Edward because she had long been in love with her childhood sweetheart, Richard, Duke of Gloucester; the second, that Edward of Lancaster was a cruel youth who mistreated his young bride. Neither myth has any basis in fact. Anne and Richard did know each other in their youth, but what each thought about the other is unrecorded. As for Edward’s personality, I’ve posted about this before, but it’s worth mentioning again that the famous comment that he talked of “nothing but of cutting off heads or making war, as if he had everything in his hands or was the god of battle or the peaceful occupant of that throne,” should not be taken as the sum total of his character, as it too often is. The comment was made when Edward was only thirteen, and the source was an ambassador who was hostile to the House of Anjou and who may have never met Edward in person. In any case, there is no historical evidence that Edward mistreated Anne. Indeed, we have no idea of what either spouse felt about the other or about their marriage. No one recorded the private interactions of the two teenagers or was inclined to speculate upon their thoughts; all eyes were on their parents.

While the dispensation was being sought and while Warwick was re-establishing Lancastrian rule in England, Edward, Anne, and their mothers were at the Chateau of Amboise (pictured above), where King Louis XI himself was in residence. There they were married on December 13, 1470, by the Grand Vicar of Bayeux. Kendall with his usual bias describes the marriage as “something of a hole-and-corner affair,” though it is hard to understand how a marriage performed by the Grand Vicar of Bayeux at a royal palace where the French king himself was present can merit such a description. (In fact, we know far more about this “hole-and-corner” marriage than we do about Anne’s second marriage to the Duke of Gloucester, for which we don’t know the date, the location, the identity of the person who officiated, or the identity of any of the guests.)

Whether the marriage was consummated is unknown. I’ve blogged about this elsewhere and won’t repeat myself at length, but I’m inclined to think that it was, as it would have been foolish of Margaret to alienate Warwick by preventing its consummation. Louis XI, who had worked hard to promote the marriage and who had been supporting the pair and their mothers at his court, would have also been furious had Margaret refused to allow the young couple to bed together.

The day after their marriage, the newlyweds and their mothers went to Paris, where Louis had arranged for them to be greeted by city and university officials. They entered the city through the Porte Saint-Jacques, passing through streets that in their honor were lavishly decorated with tapestries and other hangings, before arriving at their lodgings at the Palais (on the site of the present Palais de Justice complex, if I’m not mistaken, and I hope someone will correct me if I am). From Paris, the couple went to Normandy. They at last returned to England in April, where they were confronted with the disastrous news of Warwick’s defeat and death at Barnet.

Happy or unhappy, the couple’s marriage ended on May 4, 1471, when Edward of Lancaster was killed at Tewkesbury. The pair had been married for less than six months.

Calendar of State Papers and Manuscripts in the Archives and Collections of Milan: 1385-1618

5 thoughts on “Happy Anniversary to Edward of Lancaster and Anne Neville!”