I’m pleased to be a part of Judith Starkston’s blog tour for her first novel, Hand of Fire. While this isn’t a period I’m well versed in, this guest post made me eager to learn more about it, and I bet you’ll be interested as well! Over to Judith:

The Trojan War: Myth or History?

I set my debut novel within the Trojan War. Hand of Fire tells Briseis’s story, the captive woman who sparked the bitter conflict between Achilles and Agamemnon and thus holds a central position in the plot of Homer’s Iliad. Despite her importance to the action of this war poem, she receives only a few lines and remains largely an enigma—so I gave her a long overdue voice and life.

While my purpose in writing Hand of Fire was to tell a compelling tale, I also wanted to reflect accurately the history of this time and place. At the very least, it seems fair to ask did a Trojan War ever happen or is Homer’s famous war the stuff of legend?

The ancient Greeks certainly viewed the war as something true from their long ago past, complete with a thousand Greek ships beached in front of the great walled city for ten years. The romantics among you will have to give up the numbers of ships and that long stretch of ten years because both sums are highly unlikely if not downright impossible. However, if you define “Trojan War” as a series of major and/or repeated attacks by Mycenaean Greeks on Troy at the end of the Late Bronze Age, then that seems historically possible. The evidence is by no means definitive, but it’s looking better all the time.

The evidence falls into two categories: textual and archaeological.

Textual? you say. What texts would those be? Clay tablets written in Hittite and several other languages with cuneiform script, which looks like closely-packed bird tracks. These Bronze Age archives have been found at sites throughout the area which is now modern Turkey, but the majority come from the capital of the Hittite Empire called Hattusa, not too far from modern Ankara. Troy, on the western coast of Turkey, was often a vassal state to the Hittite Empire and is a sort of cultural cousin to the Hittites. 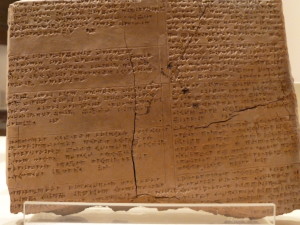 While no tablets have been found in Troy, we have several treaties and letters from Hattusa that pertain to Troy, which the Hittites called Wilusa (a variant of Ilion, the other Greek name of Troy). Some of these also mention conflicts involving the Greeks, called Ahhiyawa by the Hittites. Unfortunately from the perspective of answering how historical the Trojan War was, none of these conflicts quite matches up to what we need.

In a couple cases it sounds like the Greeks fought with the Trojans against the Hittites. But in other cases, it appears the Greeks were the aggressors against the Trojans with the Hittites coming to Troy’s defense. One of these possibilities even has the tantalizing mention of a Trojan king named Alaksandu—so close to Alexander, of stealing Helen fame. With each of the tablets concerning Greeks and Troy, there are problems identifying the conflict as the Trojan War, as we know it.

However, this clay-based evidence does demonstrate that Greeks were causing trouble and fighting near Troy. It is reasonable to believe that there were numerous large and small conflicts over time that could have been collapsed into one epic war either to make a better tale or because over the centuries that’s how this conflict got remembered. The Hundred Years War was a messy series of conflicts, not one big war, and it did not last exactly one hundred years, so these Homeric “fudges” aren’t such a leap. Many scholars are willing to accept this understanding.

We are all hoping just the right tablet is sitting in one of the storerooms waiting to be translated. There are so many, and more coming from digs all the time. We may need patience not imagination to solve this question via texts.

Then there’s the archaeological evidence. Fortunately the site of Troy, which was disastrously excavated in the 19th century by Schliemann, has been rescued and given a modern “makeover” by Manfred Korfmann and his successors. We now can say some fairly definitive things about Troy and a possible Trojan War.

In short, the correct layer of Troy, dated to about 1200-1150 BCE, variously identified as VIIa or VIi (same level just two systems of labeling), was destroyed by a great fire caused by war. There are abandoned piles of catapult projectiles and unburied bodies, so we know the Trojans lost. They’d have picked up the valuable ammunition and stowed it away if they won, not to mention buried their dead. There are other destruction layers, at least one by earthquake, but this burning of VIIa seems to match what we need rather conveniently. This particular level has the most impressive fortification walls, large paved streets, skillfully squared stonework and all the other signs of a wealthy Bronze Age city at its peak. It also reveals a city under threat. The most vulnerable of the gates into the citadel was walled up and there are other signs of shoring up any weak spots in the defenses. Troy is a baffling site to the uninitiated, but when someone like Korfmann explains what all that jumble reveals, I hear a pretty darn good case. It helps that proving the Homeric connection was never Korfmann’s purpose, but he realized that this mattered to a lot of people, so he tried to summarize what the evidence said. 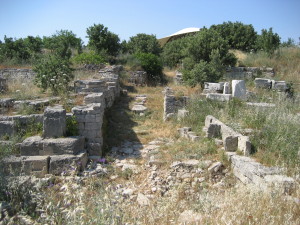 In a 2004 article for Archaeology, an online publication of the Archaeology Institute of America, Korfmann gave his answer to the question, “Did the Trojan War really happen?” In his final summary he put it this way:

“According to the archaeological and historical findings of the past decade especially, it is now more likely than not that there were several armed conflicts in and around Troy at the end of the Late Bronze Age. At present we do not know whether all or some of these conflicts were distilled in later memory into the “Trojan War” or whether among them there was an especially memorable, single “Trojan War.” However, everything currently suggests that Homer should be taken seriously, that his story of a military conflict between Greeks and the inhabitants of Troy is based on a memory of historical events—whatever these may have been. If someone came up to me at the excavation one day and expressed his or her belief that the Trojan War did indeed happen here, my response as an archaeologist working at Troy would be: Why not?”

In writing this post I pulled evidence from three works:

“Was There a Trojan War?” by Manfred Korfmann found at this link: http://archive.archaeology.org/0405/etc/troy.html

“Troia in Light of New Research” a lecture by Manfred Korfmann which can be found at this link: http://www.uni-tuebingen.de/troia/eng/fachliteratur.html

You can buy Judith’s novel at the following links: 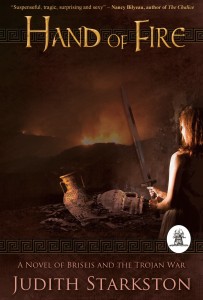 4 thoughts on “Hand of Fire Blog Tour: A Guest Post by Judith Starkston”