I’m so pleased to welcome my friend Kathryn Warner for her new biography of Edward II. I’ve been looking forward to a book like this for years, and what better person than Kathryn to write it?

Kathryn and I first met online a number of years ago, when I published my first novel, The Traitor’s Wife, about Eleanor de Clare, Edward II’s favorite niece and the wife of his favorite, Hugh le Despenser the younger.  Given that, what better topic for this guest post than Edward II and the Despenser family? Over to Kathryn: 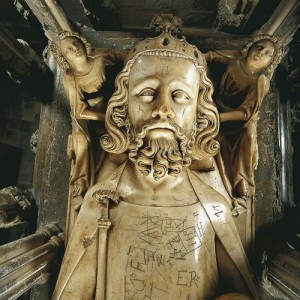 King Edward II of England (reigned 1307 to 1327) is famous, or infamous, for his reliance on male ‘favourites’, the best known of whom is Piers Gaveston, whom Edward made earl of Cornwall and who was beheaded by a group of the king’s aggrieved barons in June 1312.  The last of the favourites, Hugh Despenser the Younger, is not nearly so well-known, even though he was far more politically powerful than Piers Gaveston and helped bring about the king’s downfall and his own in 1326/27.  Rather curiously, Edward II also had some kind of intense relationship near the end of his reign with Hugh Despenser’s wife – who happened to be his own niece, Eleanor de Clare.

Hugh Despenser the Younger was born sometime in the late 1280s as the elder son of Hugh Despenser the Elder, stepson of the earl of Norfolk and later earl of Winchester (1261-1326) and Isabel Beauchamp (1260s-1306), daughter and sister of earls of Warwick and first cousin of the earl of Ulster.  Hugh the Younger made a splendid marriage in May 1306 when Edward I arranged and attended his wedding to his eldest granddaughter Eleanor de Clare, thirteen-year-old daughter of the earl of Gloucester and Edward I’s second daughter Joan of Acre.  Hugh and Eleanor’s relationship seems to have been successful, as they had at least ten children together in their twenty-year marriage: Hugh, Edward, Gilbert, John, Isabel, Joan, Eleanor, Margaret, Elizabeth and an unnamed boy who died young in 1321.

Edward II was always very fond of Eleanor de Clare Despenser, his eldest niece and only eight years his junior.  Early in his reign, he paid her expenses even when she was out of court, a sign of great favour, and in 1310 paid a messenger a generous sum of money for bringing him news of her.  In 1311/12, and probably in the years before and after as well (records don’t survive), Eleanor was a lady-in-waiting in the household of Edward’s young queen Isabella of France.  Edward also showed great favour to Eleanor’s father-in-law Hugh Despenser the Elder, twenty-three years his senior, who remained utterly loyal to him from the beginning to the end of his reign and whom he may have seen as a father figure.  The king’s undoubted affection for Hugh the Elder and Eleanor, however, did not extend to Hugh Despenser the Younger, whom the king seems barely to have noticed before 1318.  Hugh the Younger, for the first few years of Edward II’s reign, allied himself with his maternal uncle Guy Beauchamp, earl of Warwick, one of the king’s most implacable enemies, rather than with his royalist father.  Hugh’s recklessness and disregard for rules – leaving England in 1310 to go jousting without royal permission, seizing possession of Tonbridge Castle in 1315, punching another baron in the face in front of the king in 1316 – cannot have helped to endear him much to Edward either.

All of that changed drastically in and after 1318, when the barons appointed Hugh as chamberlain of Edward’s household – a very influential position, as the chamberlain controlled access to the king, both in person and in writing.  The later chronicler Geoffrey le Baker writes that Edward II was intensely indignant at this appointment as he hated Hugh, and although this is probably an exaggeration, it is apparent that the king had never been remotely fond of Hugh, even though the latter was his nephew by marriage (albeit only about three to five years his junior) and the son of one of his most loyal supporters.  What followed next is a fascinating turnaround: By 1320, Edward had become infatuated with Hugh and fell over himself to do anything he could for him, however politically inexpedient.  Hugh’s land-grabbing in South Wales, which Edward encouraged and facilitated, led to the Despenser War in May 1321 and the destruction of Hugh’s and his father’s lands throughout England and Wales, after which he and Hugh the Elder were perpetually exiled from the country in August 1321.  Edward II, however, managed to bring them back to England in February 1322.  Victorious over their baronial enemies, who were killed in battle, executed, imprisoned or fled the country, success went to Edward and Hugh’s heads, and for the next few years they proceeded to rule the country capriciously and tyrannically.  Hugh, high in the king’s favour and untouchable, took any lands he felt like by illegal and quasi-legal methods, including his sister-in-law Elizabeth de Clare’s, and even imprisoned the young noblewoman Elizabeth Comyn until she consented to hand some of her lands over to him.

By the mid-1320s, Edward II and Hugh Despenser the Younger had hardly any allies left, and the country seethed with rebellion and discontent.  Either unaware or uncaring of the grand forces ranged against them, Edward and Hugh seemingly went out of their way to make more enemies, and made the terrible mistake of alienating Edward’s queen, Isabella, who loathed Hugh, his intrusion into her marriage and his persuading the king to confiscate her lands and even banish her from his company.  Isabella, sent to France in 1325 to negotiate a peace settlement between her husband and her brother Charles IV, refused to return, and with the king’s son and heir Edward of Windsor under her control, began a relationship or a political alliance with Roger Mortimer.  He was an English baron who had escaped from the Tower of London in 1323, and was the king’s most dangerous enemy and a man whose family had a long vendetta against the Despensers.  Isabella demanded that Edward send Hugh away from him, so that she could return to him safely.  Edward refused.  Pope John XXII sent envoys to king and queen to try to resolve their conflict.  Still Edward refused to send Hugh away from him.  In alliance with the count of Hainault and Edward II’s half-brother the earl of Kent, who loathed Hugh Despenser, Isabella and Roger planned an invasion of England to bring down Hugh and his father, now earl of Winchester.  It is interesting to note that at the time of the invasion in 1326, the annals of Newenham Abbey in Devon referred to Edward and Hugh Despenser as rex et maritus eius, ‘the king and his husband’.

Edward II had another very close companion and ally in the mid-1320s: his niece, Eleanor Despenser, née de Clare.  A Flemish chronicler stated openly that Edward and Eleanor were having an incestuous affair, and the later English chronicler Henry Knighton made the rather cryptic comment that while Isabella was in France in 1325/26, Eleanor was treated as though she were Edward’s queen.  The evidence of Edward’s last chamber account of July 1325 to October 1326 indicates that the two were extremely close and regularly exchanged letters and gifts, spent considerable time together and dined together privately.  In early December 1325 Edward, at Westminster, sailed along the Thames to Sheen to pay a quick visit to Eleanor, and gave her a remarkably generous gift of 100 marks (sixty-six pounds).  A few days later, he made an offering of thirty shillings to the Virgin Mary to give thanks for the fact that God had granted Eleanor ‘a prompt delivery of her child’.  Eleanor sent Edward some rich items of clothing at this time, and a little later sent him a palfrey horse with all equipment as his New Year gift.  The two spent part of the summer of 1326 sailing along the Thames together and also spent time in Windsor.  When Edward and Hugh Despenser fled from hostile London in early October 1326 following the invasion of his queen and Roger Mortimer, Edward left Eleanor in charge of the Tower, a sign of his trust in her.  Edward II’s unpopular regime quickly collapsed in the face of opposition: Hugh Despenser and his father the earl of Winchester were grotesquely executed on the orders of Queen Isabella and Roger Mortimer on 27 October and 24 November 1326, and in January 1327, Edward was forced to abdicate his throne to his fourteen-year-old son Edward III.  Eleanor Despenser was imprisoned, released then imprisoned again in the late 1320s, and died in 1337, having made a second marriage to William la Zouche, lord of Ashby in Leicestershire.

It is impossible to know for certain what kind of personal relationships Edward II had with Hugh and Eleanor Despenser, how he felt about them and how they felt about him, whether their relationships were sexual or romantic or not.  It would be fascinating to know how Edward and Hugh’s relationship changed in and after 1318, how Edward became so dangerously infatuated with a man he had known for many years and to whom he had always previously been indifferent.  It would also be fascinating to know whether he and Eleanor had a relationship which went beyond the usual one of uncle and niece.  We can only speculate, but clearly both Hugh and Eleanor Despenser were very important people in Edward II’s life, and the king’s infatuation with Hugh and refusal to send him away even when faced with an invasion of his kingdom brought about his own downfall.

Kathryn Warner’s new book, ‘Edward II: The Unconventional King’, is available to buy now at the Amberley website and at Amazon US and Amazon UK. Visit Kathryn’s blog here. 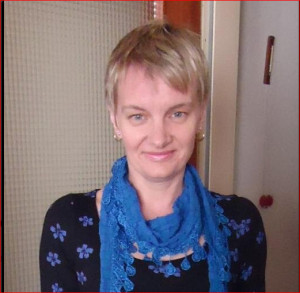 28/10/2014 – Christy Robinson at Rooting for Ancestors blogspot will be posting a general introduction to Edward II and his ancestry, and a brief overview of his reign.

29/10/2014 – Peter at Medievalists.net will be posting a guest post about Edward II and his children.

30/10/2014 – Susan Higginbotham will be posting on her blog about Edward’s relationship with his niece Eleanor de Clare  and her husband Hugh Despenser, his chamberlain and ‘favourite’.

01/11/2014 – Jen has a blog about Piers Gaveston and will be posting a guest post by Kathryn about Edward and his relationship with Piers.

02/10/2014 – Annette at Impressions in Ink will be posting a guest post about Edward II’s household.

03/10/2014 – Becky Cousins at The Medieval World will be posting a guest post on ‘Edward II and his Rustic Pursuits’.

04/10/2014 – Olga at Nerdalicious will be finishing off the blog tour with an author interview and a prize giveaway!

6 thoughts on “Guest Post by Kathryn Warner: Edward II and the Despensers”