I’m delighted to welcome Adrienne Dilliard, author of Cor Rotto: A Novel of Catherine Carey, to my blog! Here’s the blurb for Adrienne’s novel, her first:

The dream was always the same … the scaffold before me. I stared on in horror as the sword sliced my aunt’s head from her swan-like neck. The executioner raised her severed head into the air by its long chestnut locks. The last thing I remembered before my world turned black was my own scream.

Fifteen year-old Catherine Carey has been dreaming the same dream for three years, since the bloody execution of her aunt Queen Anne Boleyn. Her only comfort is that she and her family are safe in Calais, away from the intrigues of Henry VIII’s court. But now Catherine has been chosen to serve Henry VIII’s new wife, Queen Anne of Cleves.

Just before she sets off for England, she learns the family secret: the true identity of her father, a man she considers to be a monster and a man she will shortly meet.

Interested in reading Adrienne’s novel? Just comment below before February 1, and I’ll choose a winner! Anyone is welcome to enter regardless of where you live.

And now, over to Adrienne for her guest  post!

Relieve your sorrow for your far journey with joy of your short return, and think this pilgrimage rather a proof of your friends, than a leaving of your country.  The length of time and distance of place, separates not the love of friends, nor deprives not the show of good will.  An old saying, when bale is lowest, boot is nearest; when your need shall be most you shall find my friendship greatest.  Let others promise, and I will do, in words not more in deeds as much.  My power small, my love as great as them whose gifts may tell their friendship’s tale, let will supply all other want, and oft sending take the lieu of often sights.  Your messenger shall not return empty, nor yet your desires unaccomplished.  Lethe’s flood hath here no course, good memory hath greatest stream.  And to conclude, a word that hardly I can say, I am driven by need to write, farewell, it is which in one way I wish, the other way I grieve.

Your loving cousin and ready friend,

One of the first things I came across in my research of Catherine Carey was this lovely farewell letter from Catherine’s cousin, the future Queen Elizabeth I.  Her heartfelt words made such a lasting impression upon me that eventually, when the time came to name my work in progress, I could think of no better phrase to describe the losses in Catherine’s life than the one that Elizabeth chose to end her missive – Cor Rotto – Heart Broken.

Elizabeth’s words give us a pretty clear indication of her affection for Catherine, but what isn’t as clear is when this letter was written and, by extension, when the Knollys family fled England.  Many historians have placed the date of the Cor Rotto letter to the autumn of 1553.  I agreed with the assumption that the Knollys fled based on this date initially due to a piece of research I came across in Queen Elizabeth I: Selected Works edited by Steven W. May.   May indicates that the scribal copy in the Catalogue of Lansdowne Manuscripts in the British Museum included a leaf endorsed in Lord Burghley’s hand, “1553 Copy of a letter written by the Lady Elizab; Grace to the Lady Knolles.”  Knowing the articulate Lord Burghley’s close connection to Elizabeth, I could think of no better source than he.

On the surface, a date of 1553 seems to be accurate.  Queen Mary had already ascended the throne and we have record of Francis Knollys going abroad in September 1553.  It would seem natural that Catherine would accompany him.  However, a closer look at Catherine’s reported births gave me pause.  Per Francis Knollys’ Latin Dictionary, we know that Francis the younger was born August 14, 1553.  Knowing the intricacies of birthing procedure in Tudor England, it seemed very unlikely to me that Catherine would be setting off on such a journey only a month after the birth of her latest child.  It is possible that her churching had not even taken place by the time that Francis left so she may have even been in her confinement.

As we follow the trail of historical documents, Francis surfaces in Geneva in November of 1553.  A letter dated November 20 from John Calvin to Pierre Viret details a visit from Sir Francis and his son, Henry and praises Henry for his ‘piety and holy zeal’.  There is no mention of Catherine, but that isn’t enough to prove that she didn’t accompany her husband and son because it is highly unlikely that she would have been invited to the audience with Calvin.

This is the last documentation we have of Sir Francis abroad until the winter of 1556 when he is enrolled as a student at the University of Basle.  In 1554, Queen Mary appointed Sir Francis as Constable of Wallingford Castle.   While being out of the country wouldn’t necessarily preclude him from carrying out his duties, we can safely assume that he was home by October of 1554 in time for Catherine to, once again, be with child.

The first documentation we have of Catherine abroad is in June 1557.  She is mentioned with Sir Francis as a member of John Weller’s household in Frankfurt with a maid and five of their children.  Prior to this, as I stated earlier, we find Sir Francis listed as a student at the University of Basle in 1556 where he is living in a dorm environment with several other male students.  An environment that Catherine was definitely not living in.

Though the dating on Elizabeth’s poignant letter would indicate that Catherine fled 1553, as many historians have assumed, the evidence we have seems to point to a much later date.  The question then is whether the letter is misdated or there was a miscommunication with Elizabeth regarding the departure of her cousin.

While the date of a letter might not seem to be of the highest significance in the grand scheme of history, for a novelist it can change the entirety of a story.  Did the Knollys family flee immediately because the fear of their new queen was great enough to risk Catherine’s health or was the threat deemed low enough that Sir Francis felt comfortable leaving his family in England while he scouted the new settlements?

Unfortunately, the players no longer live to tell the tale so we have to take into consideration the surrounding circumstances to come to a fair conclusion.  I was not convinced that Catherine fled with her husband and son in 1553, but I was also not convinced that a man like Burghley would make a mistake of at least three years in the dating of Elizabeth’s correspondence.

Like any other writer, I tried to imagine myself in the early months of Mary’s reign.  In the environment of chaos and fear, it seemed almost certain that misinformation would be common as plans were made by the Reformers in this new and untested reign.  The conclusion I came to is that Francis may have initially planned to take Catherine and their family with him, but decided at the last minute that the threat from Queen Mary wasn’t as great as he had anticipated.

Any number of conclusions can be drawn from the information we have, but the one thing we can be sure of is the high regard in which Elizabeth held her cousin, Catherine and the deep grief she felt at the news of her departure.  Elizabeth was sure to make good on her word.  Upon the return of Francis and Catherine to England, Francis was immediately made a Privy Councilor and given the posts of Vice Chamberlain of the Queen’s Household and Governor of Portsmouth.  Catherine found herself serving the Queen in the Privy Chamber and would go on to be First Lady of the Bedchamber and one of the queen’s closest confidantes.

(2005) Queen Elizabeth I: Selected Works edited by Steven W. May.

Garrett, Christina Hallowell (1938/1966/2011) The Marian Exiles: A Study in the Origins of Elizabethan Puritanism 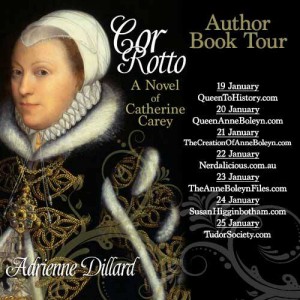 Adrienne Dillard, author of Cor Rotto: A Novel of Catherine Carey, is a graduate with a Bachelor of Arts in Liberal Studies with emphasis in History from Montana State University-Northern.

Adrienne has been an eager student of history for most of her life and has completed in-depth research on the American Revolutionary War time period in American History and the history and sinking of the Titanic. Her senior university capstone paper was on the discrepancies in passenger lists on the ill-fated liner and Adrienne was able to work with Philip Hind of Encyclopedia Titanica for much of her research on that subject.

Cor Rotto: A Novel of Catherine Carey is her first published novel.