I’m delighted to have historian Sean Cunningham doing a guest post today in connection with his new biography, Prince Arthur: The Tudor King Who Never Was. Welcome!

Gambling on a Name? Prince Arthur, Legend and the Survival of the Tudor Crown 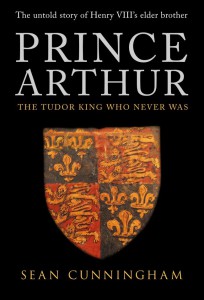 Until very recently, political leaders have rarely been willing gamblers with their own power and position. Such unexpected behaviour brings uncertainty and heightens instability beyond levels that are easy to control. In the past, where personal rule actually meant day-to-day control of government decision-making, monarchs occasionally took surprising and direct action. Richard III’s cavalry attack towards the earl of Richmond’s standard during the battle of Bosworth is a prime late-medieval English example of a decisive, calculated risk. It cost Richard his life, but it might also have won him a quick victory. Just over a year after becoming king because of Richard’s battlefield gamble, Henry VII also chanced his entire future as king of England, if not is life, on an outcome he could not influence; the birth of a healthy son.

King Henry evidently believed in the continuing intercession in his favour by the Virgin Mary and the Breton St Armel, who featured regularly in religious imagery produced during his reign. He had much to thank them for. Henry had already overcome the challenges of a life of dislocation within England and Wales when he was a child in the 1460s. He had endured exile in Brittany during his teens and early 20’s before 1483. He was in great danger of capture and death once his importance as a rival to Richard III grew before August 1485. The journey through Wales and the English west midlands towards Bosworth, however, was the most dangerous of his life. Henry survived all this and his defeat of Richard III was staggering. It thrust this unknown outsider onto England’s throne but also exposed him to all the perils that had to be faced if he was to keep hold of power.

The dangers were heightened because Henry VII’s battlefield success was incomplete. Only Richard III, his household knights and most committed followers had been destroyed in the fighting. A huge body of men simply put down their weapons and were allowed to walk away. How was Henry to know whether they were prepared to believe in his right to rule? Were they awaiting another chance to depose him for a familiar figure with more obvious royal credentials? Against this background of uncertain loyalty, Henry’s marriage was an essential step towards bringing together the rival Yorkist and Lancastrian activists who had perpetuated the civil wars since the 1450s. The achievement of this hope could only become reality, however, in the offspring of Henry’s marriage to Edward IV’s heir, Princess Elizabeth.

The nation had rejoiced at the news of Queen Elizabeth’s pregnancy, which must have occurred within a few weeks of her marriage on 18 January 1486. In seeking assurances about their baby, the king and queen no-doubt consulted astrologers, physicians and theologians. All of these experts might have helped them to believe that God would favour them with a son, but none could be absolutely certain. Henry VII knew this, yet felt he had little choice but to stake his kingship on the certainty of the birth of a healthy prince.

Even 530 years later, there is a sense of anticipation and calculation within the political elites as they awaited news of the royal child. The commitment of many people to the new king would depend on the arrival of a male heir. Henry’s triumph on the battlefield had pushed aside more established figures with thicker royal blood. Some, like the earl of Warwick and duke Buckingham, were underage. Others who were adults, like John de la Pole, earl of Lincoln, had been personal friends of Richard III. These three men, and many others, had stronger and wider family ties to the old nobility than did the new king.

The danger to the royal family was very real and pressing. Throughout the country, Henry was probably known only through the hostile proclamations made against him by Richard III. In his adult life, he had been personally unfamiliar with the way the elite English political and social systems worked. His knowledge of the country’s most powerful individuals came only through reports from people that had been in England during the reigns of the Yorkist kings. Henry was isolated within a small group of former exiles which needed time to reintegrate into the communities and networks built around their estates. A military victory gave Henry some advantages in holding onto the crown in the short term. His main aristocratic backers, like Lord Stanley and the earls of Oxford and Shrewsbury, supplied enough muscle to secure the immediate aftermath of Bosworth. But strong swords were not the basis for a reign that hoped to shake off the factionalism of the previous thirty years.

Some of those nobles steeped in a cycle of vengeance were ready to rebel. A few northern lords and knights loyal to Richard III’s memory had already tried to start an uprising at Easter 1486, when the king was at York. The imminent royal birth would have a decisive impact on how Henry’s support continued to take shape. Some families would fall into line, while others would feel forced into opposition while the Tudor heir was still a vulnerable infant. Once the queen’s pregnancy progressed safely past the first few weeks, the king could begin to prepare for the birth of an heir. His choices indicate just how much he was prepared to gamble on the arrival of a son.

By the early summer of 1486, the king’s close relatives and councillors involved in planning the celebrations surrounding the birth would have known that King Henry was convinced that his child would be male. On that basis alone the king and his advisers devised a masterpiece of propagandist theatre which merged the boy’s intended given name -Arthur- with a deeper story of ancient British kingship based on King Arthur’s association with Winchester.

With only his certainty of divine help to guide him, Henry’s intention to name his son after the legendary leader of the British resistance to the Saxon invasions of the fifth century was a bold stroke. A prince named Arthur was meant to follow the perfect kingly example that the literary Arthur possessed in the works of Geoffrey of Monmouth, Sir Thomas Malory and William Caxton: ‘a paragon of generosity, affluence, courage, military success, and courtliness’ according to Oliver Padel in the ODNB. The legendary King Arthur had been written into the historical record through the popularity of Geoffrey of Monmouth’s twelfth century re-working of his story. Physical evidence also survived: Arthur’s round table was still visible at Winchester. The city was known to be one of a few possible locations for Camelot. In laying all of these associations around the shoulders of his hoped-for infant son, the Tudor king was broadcasting a strong message to the political elite and the wider population. Arthur could unite the nation and its people in the aftermath of war and in the face of the king’s enemies; but only if he was nurtured and supported by all loyal subjects.
King Henry’s confidence, judgement and support would have been shattered had a healthy male child not been born on 20 September 1486. The expectant aristocracy were able to join in the spectacle and ceremony of a prince’s christening in exactly the way the king had planned. Although it is dangerous to paint Henry VII in 1485-6 as a far-sighted and obsessive dynasty-builder, he did risk all on his ability to exploit the safe delivery of a healthy son so early in his reign. Arthur’s birth became the first stage in a long-term process that would build the future power of Henry VII’s family around the Tudor her as an undisputed king and a unifying figurehead.

Had there been any difficulties with the birth (and Arthur might have been premature, since he was born just eight months after his parents had married), or had Elizabeth’s first child been a girl, then the king’s propaganda could not have worked so smoothly. It might have fallen completely flat. Judging by what came to pass with Lambert Simnel’s Irish-backed invasion of spring of 1487, it seems that the birth of a Tudor prince did force many people into decisions over their loyalty. The lukewarm support of some for Henry VII became firmer. Others swung the other way into direct action against him. The very existence of a son and heir increased vastly the likelihood of Tudor security in the longer term. Yet there would be a short-term rise in active opposition as those vehemently opposed to Henry VII felt their opportunities to depose him began to slip away the longer he reigned and the stronger his heir became.

By the mid-1490s, Perkin Warbeck’s conspiracy attempted to undermine the status of Queen Elizabeth as Edward IV’s heir. Warbeck’s claim to be her brother, Richard, duke of York, sought to negate Arthur’s status, shift loyalties back towards the House of York, and stir up rebellion against the Tudor crown. This rise in opposition might have erupted in 1486 had the specific pageantry and spectacle staged for Prince Arthur’s birth not been required. As he had done on the road to Bosworth, Henry VII was willing to take the gamble that divine and earthy allies would provide the support he needed. Arthur’s birth was the foundation for any dynastic plans that Henry VII possessed and set the Tudor crown on a course that had far-reaching consequences for future generations of Britons.

1 thought on “Gambling on a Name: Guest Post by Sean Cunningham”