I  just hit “send” on the completed manuscript of my Mary Surratt novel, Hanging Mary. There will be a few tweaks to come, no doubt, but I’m pleased with how it turned out. (The characters would not echo my sentiments.)

Since I finished this up on Election Day in the United States, I’d thought I’d post a timely excerpt: Mary Surratt, her daughter Anna, and her boarders Nora Fitzpatrick and Louis Weichmann, awaiting the results of the 1864 Presidential election between incumbent President Abraham Lincoln and General George B. McClellan. 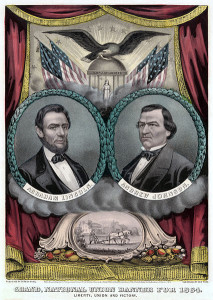 “Whom did you vote for, Mr. Weichmann?” Anna asks.

“Now, Anna,” I say, “That is Mr. Weichmann’s sacred right not to say.” I am curious to hear the answer myself, however.

“I voted for the man I thought would serve the country best,” Mr. Weichmann says.

“I hope President Lincoln is defeated.” Anna puts in. “He is a hideous man.”

“Father saw him once. He said he has very kind eyes.”

“Your father sees everyone, Miss Fitzpatrick.”

“Indeed, he does. There’s hardly a soul in Washington he doesn’t know, at least by sight. But he only glimpsed the President riding to his summer place. I rather hope he wins.” Miss Fitzpatrick puts her chin on her hand and sighs. “It is such a pity to live in the capital city, and have to find out the election results in the morning just as if we were in Kansas or something. I wish we could stand out by the White House and wait. If we had an escort, we could go.”

This is such a naked appeal to Mr. Weichmann, I cannot help but smile and wonder how many such sad-eyed petitions Mr. Fitzpatrick has heard over the years. Fortunately, Mr. Weichmann reacts as hoped. “I can escort you and the other ladies there, if you like.”

“Oh, would you please, Mr. Weichmann?”

“I’ll go too,” Anna says. “Even though I won’t be able to endure it if that creature wins.”

“Which he probably will,” I warn her.

“It will be a long wait, perhaps, and it is a miserable night,” Mr. Weichmann adds.

“We’ll wrap up well,” Miss Fitzpatrick promises. “Mrs. Surratt, won’t you come? It will be lonely sitting here all by yourself.”

Touched, I say, “I will be delighted to.”

So, bundled up and carrying umbrellas, which knock against each other as we make our way down the muddy street, we head under Mr. Weichmann’s protection to the White House, in front of which a crowd of white and black, male and female, has already gathered. The club rooms and the hotels, Mr. Weichmann tells us, are the best place to await news, but they are not suitable places outside of which for ladies to linger.

Even where we stand, however, news arrives regularly, in the form of men, some more sober than others, who come to yell out the latest returns. Most are in favor of President Lincoln, which invariably meet with chorus of “Huzzah!” in which Miss Fitzpatrick at first refrains from joining out of consideration for Anna, though even the latter appears to be caught up in the atmosphere. By the fifth or sixth time, however, Miss Fitzpatrick forgets herself and cheers with the rest.

“I wish Johnny were here,” my daughter says, stamping her boots to keep her feet warm. “How sad to be at that dreary tavern when there is so much excitement here.”

As the night wears on and it becomes clear that the President’s re-election is assured, we are preparing to go home when a group of men, bearing the Pennsylvania flag, push their way through the crowd and began to sing:

Shouting the battle cry of freedom,

We will rally from the hillside, we’ll gather from the plain,

Shouting the battle cry of freedom!

Down with the traitors, up with the stars;

While we rally round the flag, boys, rally once again,

Shouting the battle cry of freedom!

“There is a Southern version of this song too,” Anna hisses. “Johnny taught it to me.”

The Pennsylvanians having stopped singing, and Anna humming, the former begin yelling for the President to appear—which, presently, he does, leaning his head out the window as the crowd yells and Miss Fitzpatrick gives a yelp of delight.

“I can’t make out his features,” I admit. “My vision is not like it used to be.”

We fall silent as the President begins speaking. “I am thankful to God for the approval of the people, but, while deeply grateful for this mark of their confidence in me, if I know my heart, my gratitude is free from any taint of personal triumph. I do not Impugn the motives of anyone opposed to me. It is no pleasure to me to triumph over any one. But I give thanks to the Almighty for this evidence of the people’s resolution to stand by free government and the rights of humanity.”

“The rights of darkies,” mutters Anna, and turns away, her nose in the air, leaving us no choice but to follow her. As we walk home, pressing close to Mr. Weichmann as drunks weave too closely to us, I feel my own pang of sadness.

Lincoln has carried the State of Maryland.

8 thoughts on “Finished! And a Timely Excerpt”