The other day, I was fooling around on eBay (a place I really have no business being). As is my wont, I did a search for “Despenser” (among other searches) and lo and behold, what appeared but a doll costume entitled “Eleanor le Despenser”! I said to myself, “Self, if there’s one person in the world who truly needs this, it is you!” (Talk about niche marketing.) So in the great tradition of consumerism, I pressed the “Bid” button, and in due course, I won the auction and received my item.

Unfortunately, in my excitement that someone would name a doll costume after Eleanor, I failed to note the seller’s very plain statement that the doll was not included. As this costume was made for a 17-inch doll, and all of my own fashion dolls are 11-1/2-inch Barbies, this has made for problems in the fitting room, as the folks on “Project Runway” would say. Still, don’t you think Eleanor looks nice? (Perhaps Hugh or her uncle Edward II will stop by and pay her a compliment. And there is a scene in The Traitor’s Wife where she has to wear a larger woman’s clothing, so maybe this might work after all.) There’s a mantle that goes with it as well, but since this was a smaller doll, it rather overwhelmed her, so I left it off. 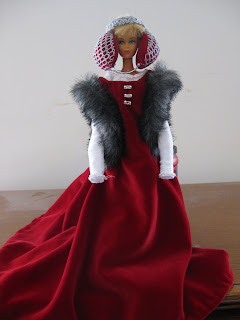 I might not be blogging much in the next week or so, as I’m working on a presentation for the Richard III’s Society’s upcoming meeting here in the US. My presentation will be on medieval gambling, since the conference is being held in Las Vegas. Getting it ready (including perusing PowerPoint 2007 for Dummies), as well as practicing the secret handshake that we Woodville lovers give each other at Richard III events, will be keeping me busy for a while.

I have a copy of Hilary Mantel’s Booker-prize-winning Wolf Hall to take on the plane. I’m looking forward to reading it!

Lastly, but no means leastly, Lisa over at BookBlab is giving away a copy of Hugh and Bess, so stop on by before October 31 and sign up!

16 thoughts on “Eleanor le Despenser Gets a New Dress”