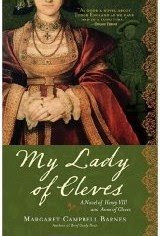 Sourcebooks has been reissuing a number of historical novels, including two classics by Margaret Campbell Barnes about two of historical fiction’s perennial favorites: Henry VIII’s wives. Brief Gaudy Hour is about Anne Boleyn; My Lady of Cleves about Anne of Cleves. I was pleased to be sent review copies of the two reissued Barnes novels.

Having read an out-of-print version of My Lady of Cleves some time ago, I’ll repeat what I said earlier about it:

My Lady of Cleves was published in 1946; it contains a dedication to “the women who lost the men they loved in the fight for freedom.” For a sixty-year-old historical novel, it’s held up remarkably well. Barnes’s prose is uncluttered and easy to read, nothing purple or fusty about it.

Barnes’s characterization of Anne of Cleves is interesting and refreshing. Though there doesn’t seem to be much reason, historically, to take Henry VIII at his word in describing her as a “Flanders mare,” she’s often treated as such by novelists. Here, Anne is attractive, though not in the style that appeals to Henry, and she’s even given romantic yearnings for none other than Hans Holbein. How accurate this is I have no idea, but as the relationship isn’t depicted as having an effect on history or as giving rise to any offspring, I can live with it. Anne’s a capable woman who longs for children of her own and who satisfies her maternal instincts by mothering Henry’s brood. At the same time, she’s no saint; jealous of Hans Holbein’s mistress at one point, she takes the opportunity to sleep with Henry VIII, now on his fifth wife.

My Lady of Cleves is an appealing story of a woman who makes the best of a bad situation. As she has been relatively neglected by historical novelists, it’s nice to see this novel in particular being reissued. 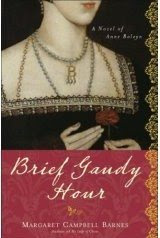 Brief Gaudy Hour, which I first read in the reissued version, tells the much more familiar story of Anne Boleyn. Originally published in 1949, it too doesn’t show its age, but can hold its own–and then some–against any of the numerous historical novels about Anne Boleyn that have been published in the past few decades.

Barnes concentrates on the psychological aspect of Anne’s story, which here spans the period from her service with Henry VIII’s sister to her death on the scaffold. Anne’s thwarted relationship with young Henry Percy is especially well done, as is her developing, then deteriorating relationship with the king. If you’re one of the few people on earth who hasn’t read a historical novel about Anne Boleyn, this one would be an excellent one to start with; if you’ve read many novels about the queen, this one is a worthy addition to your list.

Each reissued novel comes with a reading group guide prepared by Barnes’s great-granddaughter. Let’s hope some more of her books will be re-released!

11 thoughts on “Double the Annes, Double the Fun”