In November and December 1549, the Marquess and Marchioness of Dorset, Henry and Frances Grey, were on the move.  On November 24, 1549, ten gentleman came from London to escort Frances and her three daughters, Jane, Katherine, and Mary, to visit the Lady Mary (that is, the future Mary I). The ladies broke their journey at Tilty, the Essex home of George Medley, Henry Grey’s older half-brother. After breakfast on November 26, they journeyed on to visit the Lady Mary, perhaps at Beaulieu. Was this, perhaps, the occasion on which Jane is said to have refused the Lady Mary’s gift of an elaborate gown, or on which she made a sarcastic comment when one of Mary’s ladies genuflected before the Host?

After visiting the Lady Mary, Frances and her daughters seem to have gone to London, where they would have learned that Henry Grey, thanks to the downfall of Edward Seymour, Duke of Somerset, had been admitted to the king’s privy council. Catherine and Mary Grey headed back to Tilty, where they had cousins, on December 2. On December 16, Henry, Frances, and Jane went from London to Tilty, along with John Grey, Henry’s younger brother. (Henry Grey seems to have been close to his brothers:  George Medley, John Grey, and Thomas Grey all were involved in Wyatt’s rebellion with Henry in 1554, and Thomas Grey was to die upon the scaffold a few weeks after Henry did.)

On Christmas Day of 1549, the Greys were still at Tilty, where “divers of the country” dined. Five players and a boy came, along with the Lord of Oxford’s players. Perhaps Henry Grey also brought his dancing horse and his bear to the Christmas festivities, which lasted until January 9, 1550.

Later in January, the family went to Walden to visit Henry Grey’s widowed sister, Elizabeth Audley. Lady Audley returned to Tilty with the Grey family. Later, she and her niece Catherine Grey went back to Walden, but they later joined the rest of the group at Tilty again. At last, on January 31, 1550, a gentleman from the Lady Mary came to dine at Tilty.

All this proves several things: (1) Contrary to some accounts, the supposedly hunchbacked Mary Grey wasn’t hidden away by her family, but was brought along on visits. (2) Despite the prevailing notion that the Dorsets were an unloving family, they seem to have enjoyed family get-togethers. (3) George Medley must have been quite the host. One wonders what the poor man’s bank account looked like on February 1.

All this might sound as if the Greys were enjoying a jolly English Christmas season, but the Greys’ detractors have managed to give this visit a sinister cast. By moving the Tilty festivities to 1551-52 instead of the actual date of 1549-50, and by noting a comment in a letter dated February 8, 1552, that Jane Grey had just “recovered from a severe and dangerous illness,” they arrive at the conclusion that all this traveling made poor little Jane gravely ill. As Agnes Strickland mournfully put it in her Lives of the Tudor Princesses, “The equestrian journeys which Lady Jane was forced to perform with her family in the winter of 1551 were fatiguing enough to have injured the health of a strong man. . . .  All these migrations, for a delicate girl of fifteen, had the natural effect of making her very ill.”

It is hard to out-Strickland Strickland, but Mary Luke in her so-called biography of Jane, The Nine Days Queen, gamely does just that.  After a lengthy, and entirely fictitious, interlude where Katherine Brandon, Duchess of Suffolk, and Jane enjoy long, woman-to-woman talks in the country, Luke treats us to this:  “It was at the end of one such tiring and cold journey that Jane, feverish and weak–and uneasily aware that she was inconveniencing her parents–took to her bed. She was now almost fifteen and not constitutionally strong. . . . It all had an effect, and, as her mother had done months before, Jane now became seriously ill. Mrs. Ellen and Mrs. Tylney spent hours at her bedside; her parents and sisters remained absent for fear of contamination.”

Aside from the misdating of the the Tilty visit, this short passage is remarkable for its errors and inventions. First, all we know about Jane’s early 1552 illness is that it was considered severe and dangerous; we have no idea what Jane’s thoughts were at the time, nor do we know that her parents avoided her bedside or that her ladies spent hours there. Second, Frances fell ill months after Jane (in August 1552), not months before her. Third, there’s no evidence that Jane was “not constitutionally strong.”

All this goes to show that if one is determined to make one historical figure a martyr and others villains, all one has to do is confuse a couple of dates and turn a busy round of seasonal visits into a death march.

But on a cheerier note, Happy Holidays! I’ll try to blog at least once more before the year ends, but in case I don’t, or in case you’re away from your computer, here’s to a great 2012 for all of us. Look for Her Highness, the Traitor in June. Incidentally, there’s a scene in it set at Tilty, where Frances makes a fool of herself with her new master of horse. And that’s all I’m saying. 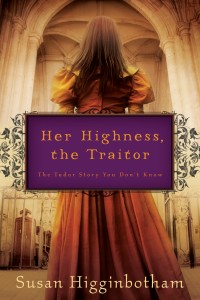 Mary Bateson, ed., Records of the Borough of Leicester. Vol. 3.

Leanda de Lisle, The Sisters Who Would Be Queen