In 1871, Henry Thomas Riley published excerpts from the inventory in the Second Report of the Royal Commission on Historical Manuscripts. The comments in brackets are those of Riley, who was under the mistaken impression that the goods were those of John’s father. According to Barrett Beer in Northumberland: The Political Career of John Dudley, Earl of Warwick and Duke of Northumberland, the complete inventory can now be found at Bodleian MS Add. C94, and I hope to obtain a transcript of it one day.

The younger John Dudley, by then the Earl of Warwick, was imprisoned along with his father and his brothers after the ill-fated attempt to put Lady Jane Grey on the throne. He was tried and sentenced to death at the same time as his father, but was spared execution. Warwick died on October 21, 1554, just days after his release from the Tower, at Penshurst, the home of his sister Mary and her husband, Henry Sidney. He was the Dudley brother who carved the famous graffito in the Beauchamp Tower seen here. 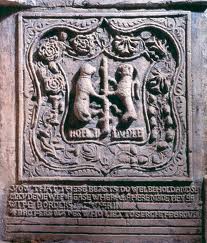 The inventory here was not made in connection with John’s imprisonment, but was made several years earlier by a Dudley servant, J. Hough. Hough carefully noted his master’s possessions and their subsequent fate.

Here are some selections from the excerpts mentioned by Riley. With this first batch, I enjoyed learning how shirts could be recycled. (Not even gifts from one’s mother were sacred):

Item, a shirt of blackworke, which my Lady Duddeley yave my Lord, cut in to handkerchers at London, 1550 December 22.

John’s brother Robert must have enjoyed getting this:

Item, a velvet cote sett with roses and ragged staves of goldsmithes worke, whiche my Lady of Warwick had at Enveld, and yaue the cote to Sir Robert Duddeley, 1548 Janu. 8.

Some of the inventory is taken up with the fate of John’s buttons:

(John Seymour was probably the illegitimate brother of Edward Seymour, Duke of Somerset.)

Item, 4 buttons were cut of my Lords gowne in the privie chamber by Mr. Fuwilliams [Fitz-William], and never gottin againe, 1550 June 29.

Item, 36 buttons of goold, sex cornerd, and black enamiled changed for 31 pare of black enamiled agletes: which agletes and 8 pare mo of the same makying and bought the same tyme, and 39 black enamiled buttons, all sett on a velvet cap, were stollen, cap and all, at Hatfeld, 1550 June 24.

Young John seems to have been parted from his caps on several occasions:

Item, a black velvet capp lost at my Lord of Huntintones, 1550 October 23.

Item, a velvet cap, lost in laye  to Jakes Granado, at Westminster, for running at the ring, 1550 June 6.

One wonders if someone in the laundy at Ely House didn’t have slippery fingers:

John also possessed an impressive array of books, which show that his tastes were broad:

Item, a bokc to speake and write Frenche.

Item, a plaine declaration of the Crede.

Item, Epistles from Seneca to Paule.

Item, a Frenche boke of Christ and the Pope.

Item, a Play of Love [by John Heywood].

Item, a play of the Weither [by Heywood].

Item, a boke to write the Roman hand.

Item, a paper boke of Synonimies.

Item, a boke of Phisick, in Greeke.

Item, a boke of Conceits.

Item, an Exposition of the Crede, in French.

Item, a Testament in Frenche, covered with black velvet.

Incidentally, an additional light is shed on John’s intellectual interests by his contemporary and friend John Dee, the mathematician and astrologer. In his Preface to Euclid, Dee wrote of John Dudley:

Who was a yong Gentleman, throughly knowne to very few. Albeit his lusty valiantnes, force, and Skill in Chiualrous feates and exercises: his humblenes, and frendelynes to all men, were thinges, openly, of the world perceiued. But what rotes (otherwise,) vertue had fastened in his brest, what Rules of godly and honorable life he had framed to him selfe: what vices, (in some then liuing) notable, he tooke great care to eschew: what manly vertues, in other noble men, (florishing before his eyes,) he Sythingly aspired after: what prowesses he purposed and ment to achieue: with what feats and Artes, he began to furnish and fraught him selfe, for the better seruice of his Kyng and Countrey, both in peace & warre. These (I say) his Heroicall Meditations, forecastinges and determinations, no twayne, (I thinke) beside my selfe, can so perfectly, and truely report. And therfore, in Conscience, I count it my part, for the honor, preferment, & procuring of vertue (thus, briefly) to haue put his Name, in the Register of Fame Immortall.

To our purpose. This Iohn, by one of his actes (besides many other: both in England and Fraunce, by me, in him noted.) did disclose his harty loue to vertuous Sciences: and his noble intent, to excell in Martiall prowesse: When he, with humble request, and instant Solliciting: got the best Rules (either in time past by Greke or Romaine, or in our time vsed: and new Stratagemes therin deuised) for ordring of all Companies, summes and Numbers of mẽ, (Many, or few) with one kinde of weapon, or mo, appointed: with Artillery, or without: on horsebacke, or on fote: to giue, or take onset: to seem many, being few: to seem few, being many. To marche in battaile or Iornay: with many such feates, to Foughten field, Skarmoush, or Ambushe appartaining: And of all these, liuely designementes (most curiously) to be in velame parchement described: with Notes & peculier markes, as the Arte requireth: and all these Rules, and descriptions Arithmeticall, inclosed in a riche Case of Gold, he vsed to weare about his necke: as his Iuell most precious, and Counsaylour most trusty. Thus, Arithmetike, of him, was shryned in gold: Of Numbers frute, he had good hope. Now, Numbers therfore innumerable, in Numbers prayse, his shryne shall finde.